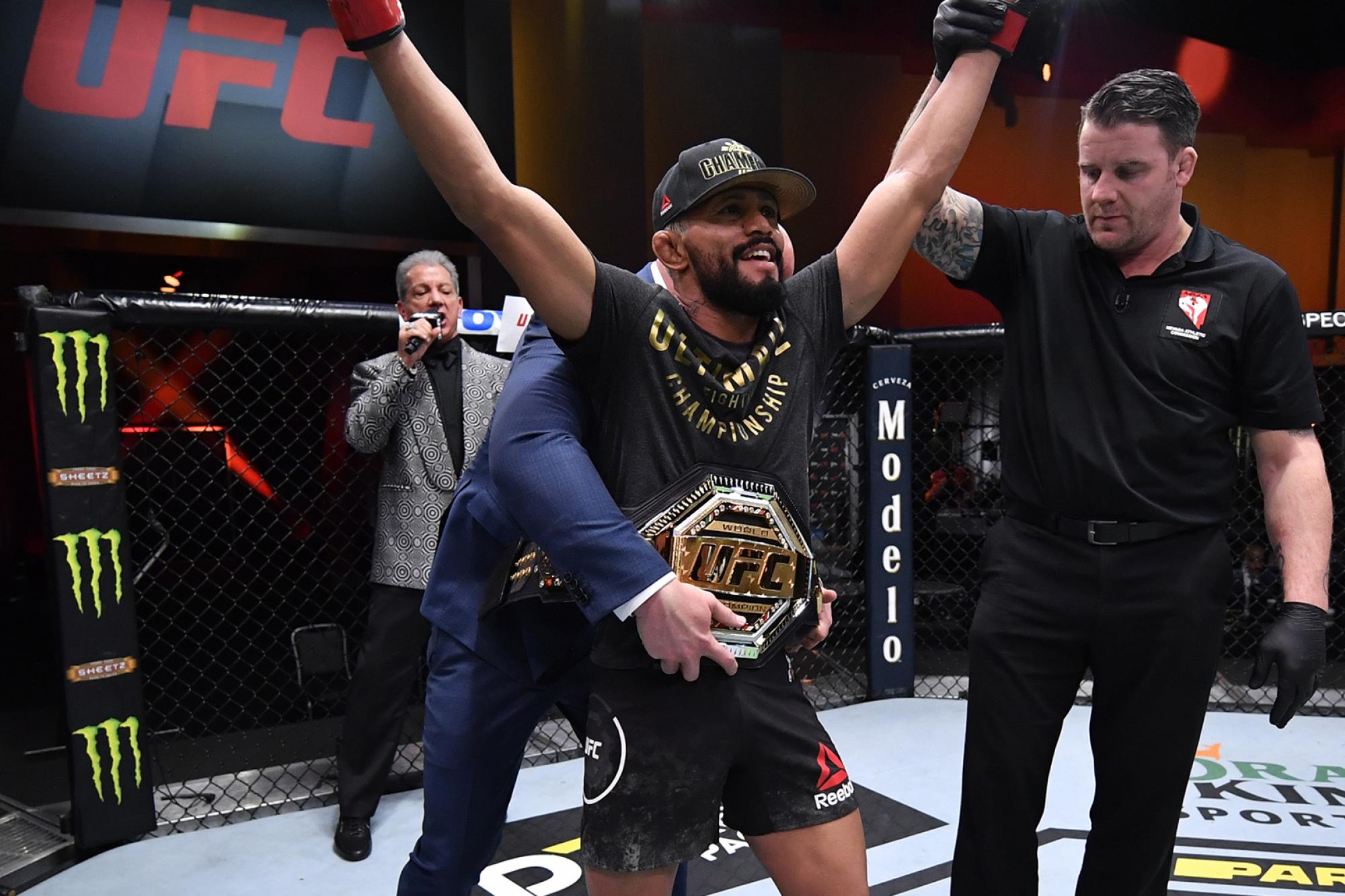 Deiveson Figueiredo believes that if he can defeat Brandon Moreno at UFC 256, he will go down as the Fighter of the Year.
By E. Spencer Kyte, on Twitter @SpencerKyte • Dec. 11, 2020

Deiveson Figueiredo’s year didn’t start the way he had hoped.

Paired with Joseph Benavidez in a battle for the vacant flyweight title on February 29 in Norfolk, Virginia, the Brazilian contender lost his opportunity to claim UFC gold on this year’s extra day when he failed to make championship weight the morning prior to the contest.

Once they hit the cage, the bout ended in controversy, as an accidental clash of heads opened a huge gash in Benavidez’ hairline, and his fussing with the blood streaming down the side of his face created an opportunity to Figueiredo to drive home a powerful right hand that put him on the deck and signaled the start of the finishing sequence. Despite the victory, Figueiredo was forced to return home empty handed.

Order UFC 256 For Any Device

But in the nine months and change since that unsatisfying evening in Virginia, things have been going exceptionally well for the talented flyweight.

“For a year that didn’t start very well for me, 2020 turned out to be great,” Figueiredo said on Monday, speaking through a translator.

He ran things back with Benavidez in July, and this time, there were no miscues or controversies, as he made weight without issue and then made quick work of the Las Vegas-based veteran, dominating the action on the feet before sinking in a rear naked choke to secure the finish in the waning seconds of the opening round to claim the vacant UFC flyweight title.

Last month, Figueiredo successfully defended the belt for the first time, making Alex Perez pay for leaving his neck exposed as he entered for a takedown, clamping down on a guillotine choke that forced the challenger to tap just prior to the two-minute mark of the opening stanza.

Before he left the Apex that night, the Brazilian champion had his next fight booked, and this weekend, he’ll make the fastest turnaround of any titleholder in UFC history when he steps in against streaking challenger Brandon Moreno in the main event of Saturday’s final pay-per-view of the year.

“I was able to win the belt and defend the belt, and hopefully I will defend the belt once again and be in the talks for Fighter of the Year,” said Figueiredo, who looks for his fourth victory and fourth finish when he squares off with the former Ultimate Fighter competitor this weekend.

“I have to really thank God that in a year like 2020, I was able to accomplish everything that I did,” he added. “To come back and defend my belt again, to be in the history books, means a lot to me. I have to also thank the UFC for giving me the opportunity. I’m very happy to be doing this.”

Figueiredo isn’t the only one making the quick turnaround to compete this weekend in Las Vegas.

Moreno registered a first-round stoppage win over Brandon Royval just a few fights prior to Figueiredo defending his title against Perez last month. Following the win, “The Assassin Baby,” who turned 27 on Monday, made his case for an opportunity to face the winner of the championship main event, and when Figueiredo made quick work of his first challenger, the UFC sprang into action, inking the duo to do battle with the flyweight title hanging in the balance as the new main event of UFC 256.

As a result of the truncated training camp, Figueiredo opted to remain in Las Vegas, taking up residence at the UFC Performance Institute in preparation for his bout with Moreno.

“It’s been great!” he said of his three-week stay in Las Vegas. “It’s been really fun being out here in Vegas. I got to train at the PI, which I had never been to before.

“I really feel like I’m at home and it has made it easier to fight again on 20 days’ notice. I feel really at ease here. My weight is good, everything is good, and I’ve got some plans to maybe have a house here so I can spend more time here.” 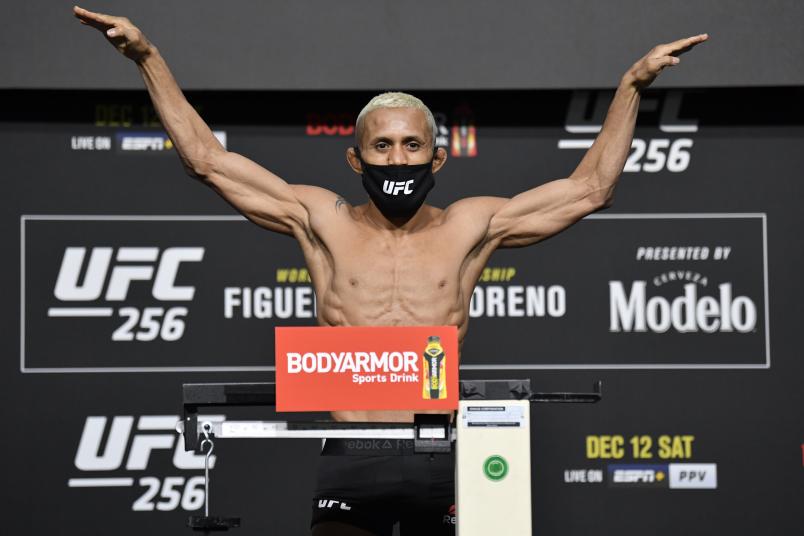 Deiveson Figueiredo of Brazil poses on the scale during the UFC 256 weigh-in at UFC APEX on December 11, 2020 in Las Vegas, Nevada. (Photo by Jeff Bottari/Zuffa LLC via Getty Images)

While he’s enjoyed his extended layover in Las Vegas, Figueiredo has been laser-focused on this weekend’s fight with Moreno, and not just because he’s motivated to retain his title either.

From the time he arrived in the UFC, Figueiredo flashed championship potential, but he’s elevated his performance throughout the last year as the stakes have increased and he’s reached those championship heights.

He’s become more aggressive and more dynamic with his offense, attacking everything with ferocity and looking for ways to create a finish every second he’s inside the Octagon. It’s a byproduct of investing in himself and his training camps — surrounding himself with more specialized coaching, more training partners, and making himself the focus of every session — and he’s clearly already receiving a solid return on his investment.

“The changes that I felt like I needed to make was to become more versatile and more dangerous inside the Octagon, and I think we’ve been able to do that,” he said of the changes he implemented at the start of the year. “We were able to bring in more coaches, new people to continue helping me with that and it was really important for me to be able to do that — to work on myself.”

Given all that he’s poured into his preparations this year, the champion expects the same type of result as he achieved in each of his first three 2020 outings when he crosses the threshold into the Octagon to defend his title for the second time in three weeks on Saturday night.

“I trained very hard to beat Brandon Moreno and you can be sure that if he’s not knocked out in the first round, he will be submitted,” he said emphatically.