Brian Ortega Is Unafraid Of Creating His Own Path

Brian Ortega Has Taken The Road Less Traveled And Forged His Own Path En Route To Second UFC Featherweight Title Shot At UFC 266
By McKenzie Pavacich, on Twitter @mpavacich_ • Sep. 21, 2021

When Brian Ortega took the UFC Countdown crew on an off-roading Jeep expedition earlier this year, he explained the mindset and approach he carries with him whenever he leaves the asphalt and heads off the beaten path.

“My favorite part is looking at these obstacles and how to get through them,” Ortega said, glancing at the steep, rocky incline ahead of him. “I just say ‘f*** it, I’m going,’ and ram myself all the way up to the top.”

He probably didn’t realize it at the time, but “T-City” created the perfect analogy for his journey once again to UFC featherweight gold, which will be contested for the second time in his career when he challenges Alexander Volkanovski on Saturday at UFC 266.

After breaking into the UFC seven years ago and since having taken out some of the biggest and longest standing names on the roster in a way that has almost appeared effortless, you can’t blame Ortega for his confidence.

While the rise of the Los Angeles native hasn’t been without challenges both inside and out of the Octagon, one thing has always remained clear: Ortega is willing to do whatever it takes to be the best, even if it means making impossibly difficult decisions.

Unafraid of venturing off of the road paved ahead of him, some of Ortega's decisions included a complete overhaul of his entire team and training situation, which he did almost immediately following his 2018 UFC featherweight title challenge loss against Max Holloway.

“Too much happened in that fight,” the 30-year-old said of his first title shot, which ended by way of doctor stoppage. “It’s a weird feeling because you’re sad that you lost, but happy that it’s over. It was a very appreciated lesson in my career now that I look at it. You learn your lessons and you either stay behind or you learn from them, and you move forward.”

Ortega chose to move forward in a way that included a new gym, new manager, new coaches and an entirely new approach to the fight game — a choice that paid dividends in his return to the Octagon nearly two years later when he faced “The Korean Zombie,” Chan Sung Jung, on UFC Fight Island. 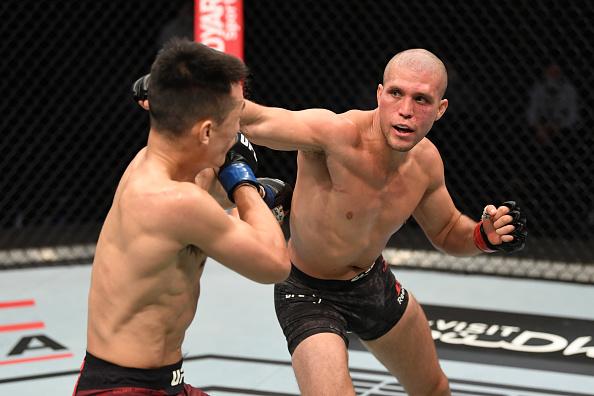 “Now there’s structure, actual structure, in my life. Before there was none. Eating right, training right, getting coaching. We all get together, we see the opponent, and then we get to work.”

MORE UFC 266: Main Event Preview | Fight By Fight Preview | How Can I Watch UFC 266? | Alexander Volkanovski Has His Eyes On The Whole Division

Whether the opponent ahead of him is a storied veteran or the one sitting atop the UFC featherweight throne, Ortega looks to evolve and continue to assert dominance each time he steps into the Octagon — something that caught the attention of Volkanovski.

Finally we have some direction in this division, get in there and take that #1 spot....that’s all I wanted!! #ufcfightisland6

“This is me learning how to get better and better and better. If this first one with Zombie showed people that I got better, that was nothing,” Ortega said. “That was just the beginning. Now I’m stepping into a different zone, a different world, and now I’m coming back scarier.”

Despite a delay in his shot at UFC featherweight gold, Ortega’s year has been filled with opportunity:  more time to hone his skills and technical superiority and the chance to serve as a coach on The Return of The Ultimate Fighter, something that has added fuel to the already intense fire burning between him and Volkanovski.

Above all, the proud Mexican American had the opportunity to witness the historic milestone of Brandon Moreno becoming the first Mexican-born UFC champion — something that has served as both inspiration and unassailable motivation.

“They say this year is the Year of the Mexicans. My goal is to be world champion and continue the success of my people,” Ortega said, grinning. “I want to show the youth that we can make it; just like Brandon Moreno says: ‘si se puede’ — yes we can.”

Emboldened by confidence, Ortega is ready to “ram his way” through Volkanovski, who hasn’t lost a fight in eight years, to the top. Armed with “an answer to every move” the defending champion plans to make in the Octagon, we can be certain that Saturday’s main event will bring out the best in both fighters.

“He moves very fast and light. His strategy is fighting smart, not raw, and I have to be a mixture of the two,” Ortega said. “There are levels to this game, and to become a champion, you gotta do different things that other people are not doing. You’ve gotta be an athlete, a fighter and a competitor. You gotta have the mixture of those three and use them well. Some people don’t have those three, but I have all those three in me.”

The UFC featherweight title is on the line Saturday at UFC 266: Volkanovski vs Ortega. Don't miss it, live on PPV on ESPN+ on Saturday, September 25th. Main Card Begins 10pm ET/7pm PT.