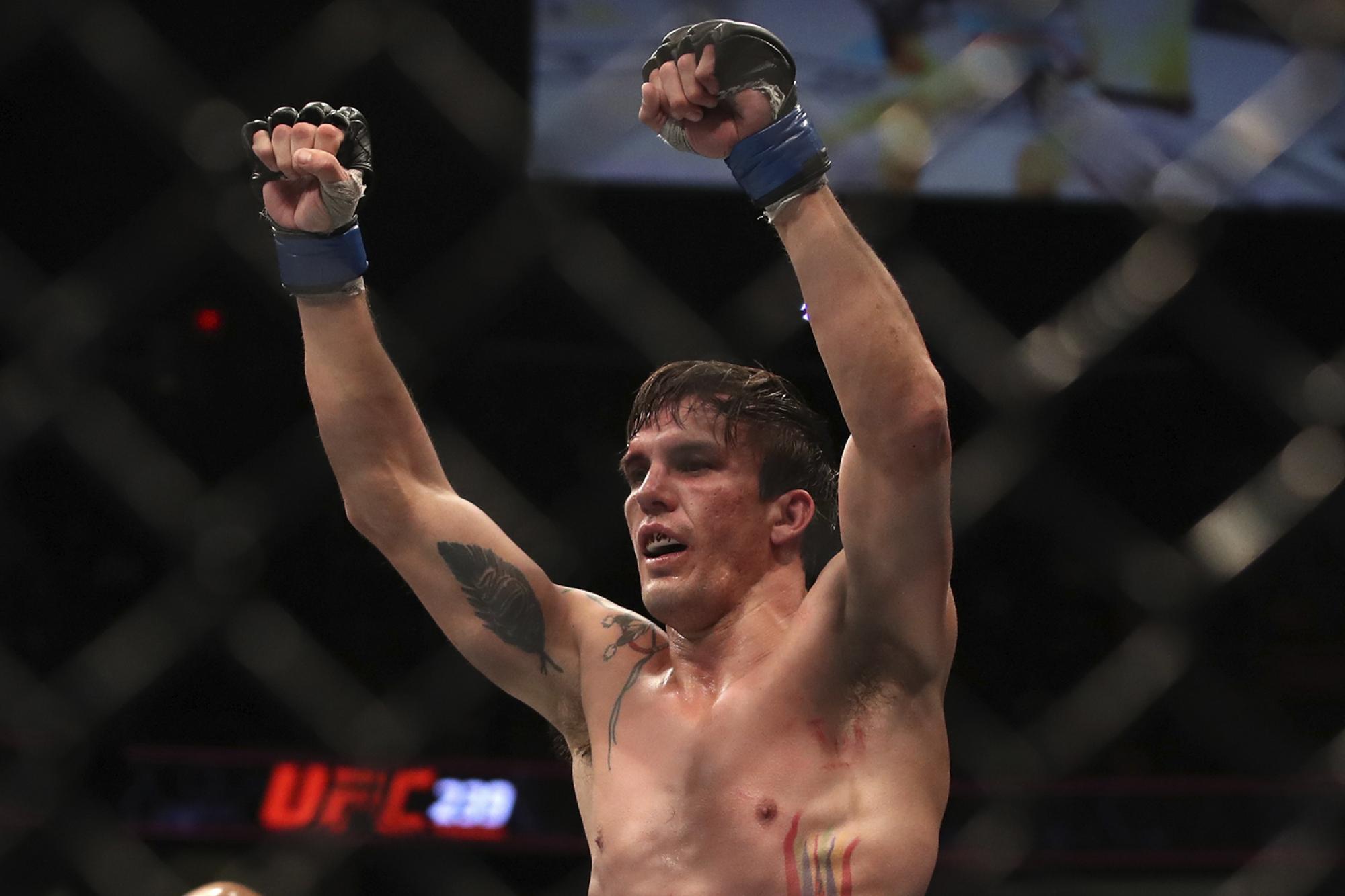 Chance Rencountre Is Doing This For Future Generations

Rencountre is pursing his UFC career in order to inspire future generations of the Osage Nation, a tribe that hails from Pawhuska, Oklahoma.
By E. Spencer Kyte, on Twitter @SpencerKyte • Oct. 30, 2019

Every time Chance Rencountre makes the walk to the Octagon, he does so with the flag of the Osage Nation draped over his shoulders, and it will be there again this weekend as the 32-year-old looks to extend his winning streak to three when he takes on Lyman Good on Saturday night at Madison Square Garden.

But as he prepares to make his fourth trip into the Octagon, the 32-year-old is finally ready to open up about frustrations he carries with him every time he makes that walk as well.

“What really matters to me the most are the people that reach out and respond to me,” began Rencountre, who hails from Pawhuska, Oklahoma and is the first member of the Osage tribe and one of few Native American athletes to compete in the UFC. “I have (all kinds of different) nations reaching out and they’re proud. They’re reaching out because they’re proud to see a Native American in there.

“It’s cool when people recognize me or when I go back to my hometown and see all these kids’ eyes light up because ‘You’re a UFC fighter,’ but it’s like, ‘I’m still Chance who grew up on a reservation,’” continued the emerging welterweight, who has earned back-to-back wins heading into his third appearance of 2019. “In their eyes, I’m something and for them to acknowledge me and come to my wrestling camps and that I can give back in those ways is cool.” 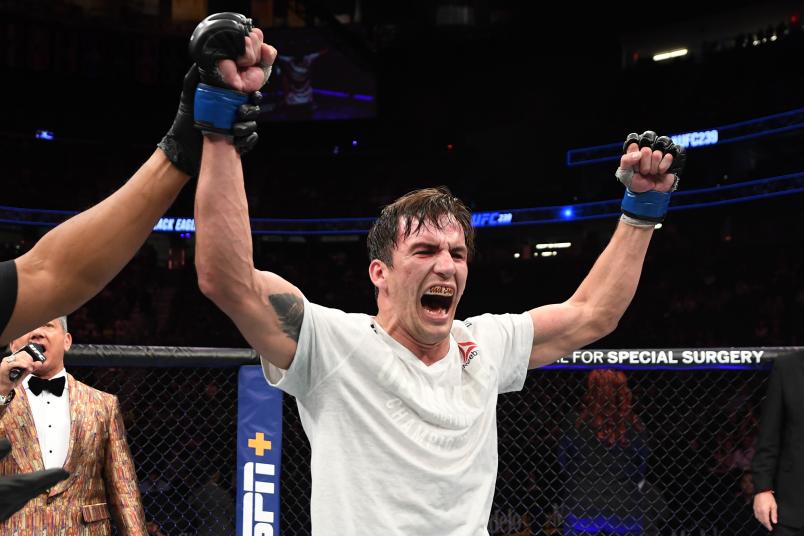 Chance Rencountre celebrates his win against Ismail Naurdiev of Austria in their welterweight fight during the UFC 239 event at T-Mobile Arena on July 6, 2019 in Las Vegas, Nevada. (Photo by Josh Hedges/Zuffa LLC)

For a population that often doesn’t see itself represented on the biggest stages, be it in sports or otherwise, seeing fighters like Rencountre, newly signed Contender Series standout Brok Weaver and former flyweight champion Nicco Montano competing in the UFC can have a massive influence on the next generation.

And while being part of that vanguard will always be a point of pride for Rencountre, his journey to the UFC hasn’t come without sacrifices and frustrations.

Last year, Rencountre packed up his pick-up truck and moved to California, outfitting a room in San Diego with his bed, dresser and big screen TV in order to train full-time with the team at Alliance MMA. In doing so, not only did he have to drop the rest of his possessions off at his mother’s house back on the reservation, but it also meant leaving his friends and family, including his daughter.

“I can’t train in Oklahoma,” said Rencountre, explaining his reasons for relocating to the West Coast. “I can’t do what I do and be successful in Oklahoma because there aren’t many gyms. So I’ve come out here to California to train with one of the best gyms in the world, but I’m proud to come from that small reservation and come out here, even though it means leaving my family.

“I have a daughter in Nebraska and leaving all my family back home, leaving the reservation back home — I could be content there and satisfied there, but I’m taking a risk, I’m taking a gamble to make something better for myself and I’m really hurt that my tribal government hasn’t supported me in the past.

“I love my people and my journey shows that you can be from a reservation, a kid that grew up with a single mother, and become something if you follow your dreams, work hard and have perseverance,” he continued. “I’m always going to carry that Osage Nation flag with me, I’m always going to take it into the cage with me, but it really does hurt me that our tribal leaders won’t recognize that I’m doing something positive for our tribe.”

For the most part, Rencountre’s frustrations are historical ones, as he cites a lack of support or sponsorship opportunities during his days grinding away on the regional circuit as one of the key ways he believes the tribal leaders could have aided him in his quest to reach the UFC.

It’s a sentiment many other athletes who have divided their time between “day jobs” and training at night in pursuit of their passions have shared over the years, yet it feels so much bigger given the greater overall significance of what Rencountre’s place in the UFC represents. 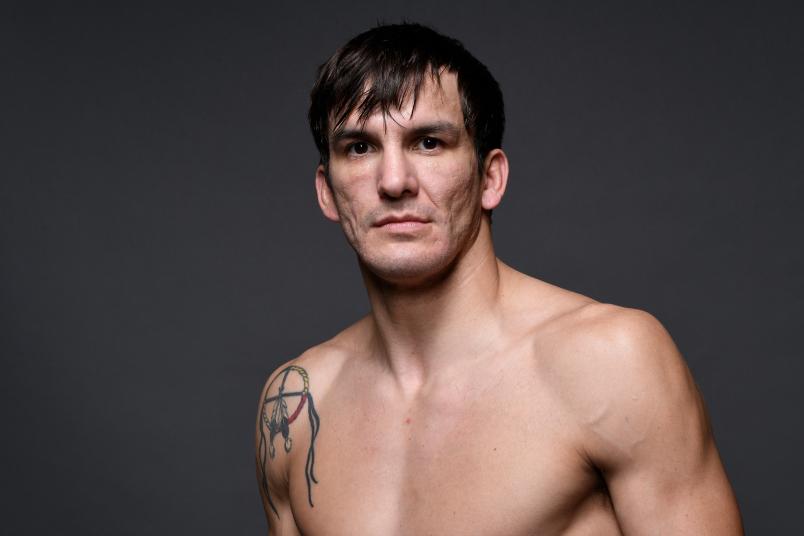 Chance Rencountre poses for a portrait backstage during the UFC Fight Night event at the Barclays Center on January 19, 2019 in the Brooklyn borough of New York City. (Photo by Mike Roach/Zuffa LLC via Getty Images)

That’s not to take away from the challenges and struggles of other competitors who have dealt with similar circumstances, but being one of the first athletes to represent an under-represented and often overlooked population at an elite level can have a tremendous impact on future generations, so to have community leaders fail to recognize that and get back behind him is disheartening to the welterweight.

“Our own tribal newspaper couldn’t get my fight name right when I talked with them,” said Rencountre, whose nickname, for the record, is “Black Eagle.”

“They called me “Black Hawk” or something like that. It’s like, ‘Come on, guys.’ I feel like I’m doing a great job trying to hold it together — I’m not out getting in trouble; I’m trying to be respectful, hold myself accountable and I just don’t know what I’ve got to do. It aggravates me.”

If ever there was a time for the tribal leaders to reverse course and start paying closer attention to the emerging welterweight, it’s now, as he readies to take part in one of the biggest events of the year in hopes of extending his winning streak to three.

Rencountre lost his promotional debut to Belal Muhammad in June 2018, a short-notice assignment that came on 10 days’ notice when he was still pulling 10-hour days framing houses and wasn’t necessarily in peak fighting shape. 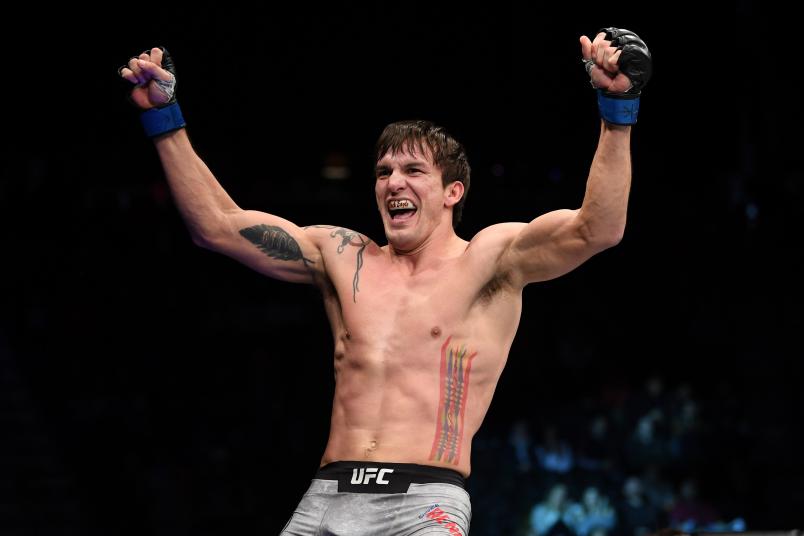 Chance Rencountre celebrates his submission victory over Kyle Stewart in their welterweight bout during the UFC Fight Night event at the Barclays Center on January 19, 2019 in the Brooklyn borough of New York City. (Photo by Josh Hedges/Zuffa LLC

“I was drinking beer and framing houses at the time,” he said with a laugh, recalling his debut. “I was doing a little bit of cardio at the time, but nothing crazy. I feel like if you give me a full camp, I’d give Belal a run for his money, for sure.”

Three months later, he packed up and headed west and the full-camp results speak for themselves.

In January, Rencountre made quick work of Kyle Stewart, climbing on his back and securing the tap before the midway point of the opening round. Six months later at UFC 239, he thoroughly outworked Austrian prospect Ismail Naurdiev, upsetting the heavily favored 22-year-old.

Now he’s set to compete at “The World’s Most Famous Arena,” taking on a local veteran looking to get back into the win column on arguably the biggest card of the year.

“I texted my sister because I always ask my sister’s advice and she said, ‘Yeah — it’s Madison Square Garden! How many times are you going to get the opportunity to perform at Madison Square Garden?’” he said regarding competing at the hallowed venue this weekend. “I was like, ‘You’re right. I don’t even know why I asked that question.’ 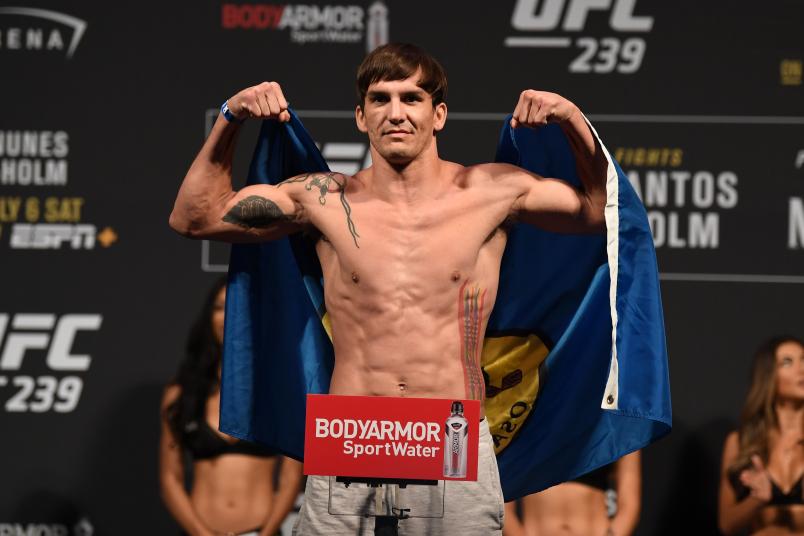 Chance Rencountre poses on the scale during the UFC 235 weigh-in at T-Mobile Arena on July 5, 2019 in Las Vegas, Nevada. (Photo by Josh Hedges/Zuffa LLC via Getty Images)

“He’s coming off a loss to a grappler and I’m a grappler as well, so I think it’s a good matchup for me,” he added, speaking about the matchup with Good, who was submitted by Demian Maia last time out. “We’re all tough at this point, so it’s all about where you can get an edge, what you can do better and I feel like my grappling will be the thing.”

A year after going “all-in” on his fighting career and moving to the West Coast, everything is starting to take shape for Rencountre, who sees continued success as a way to spend more time with his daughter and continue to pave the way for the next generation of athletes from the Osage Nation.

“I was talking to an older tribal member from a different tribe about it and he was like, ‘You’ve got to think about this in a positive way. You’re doing this for the next kid coming up,’” he recalled. “So maybe the public will see how I’ve been treated by my own tribal government and then the next kid will get more support and they will get help because we have a bunch of great athletes coming up from my reservation.

“Hopefully, my speaking about all this and doing things the way I’ve done things will open up people’s eyes and help give other kids a better shot.

“I’m not doing this for myself — it’s so that maybe the next kid coming up has a better shot at getting more support, more financial help, more things of that nature.”