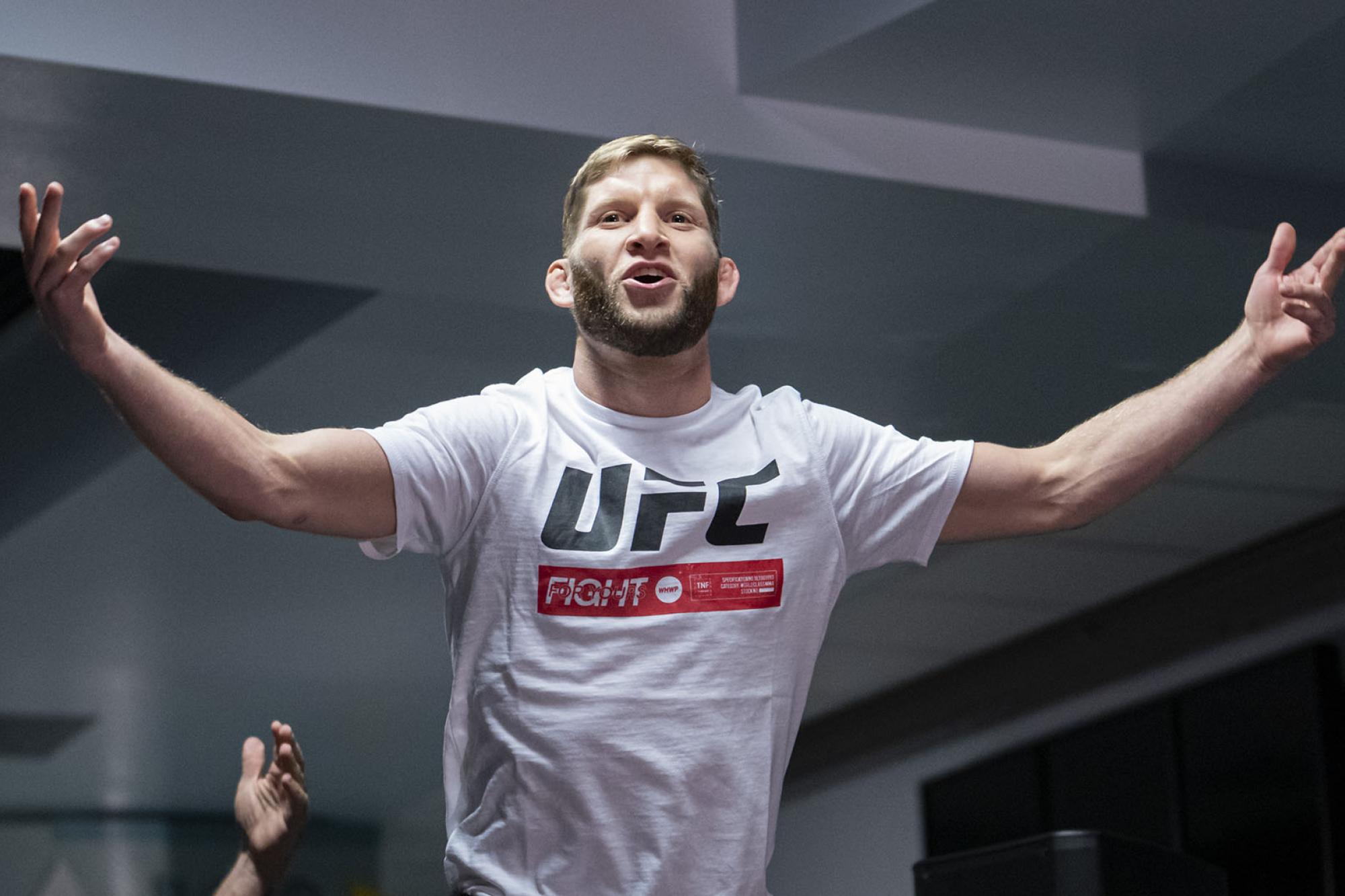 At 31 years old, Cole Smith has seen enough life that he knows in the world of professional prizefighting, sometimes it just ain’t your night.

That doesn’t mean he likes or accepts losing, but when he dropped a hard-fought split decision to Miles Johns last September, making it the first time he’s suffered defeat as a pro, he didn’t put on his sunglasses and lock himself in a dark room for a couple weeks.

“No, I got right back to work,” he said. “I wanted that win so bad I was really rushing, and I made a lot of errors because I wasn't right in my mind. I just wanted to win so bad and I think I overcame that for the next one. I'm gonna be a lot calmer and more relaxed and just enjoy it. I'm just gonna enjoy the ride this time.” 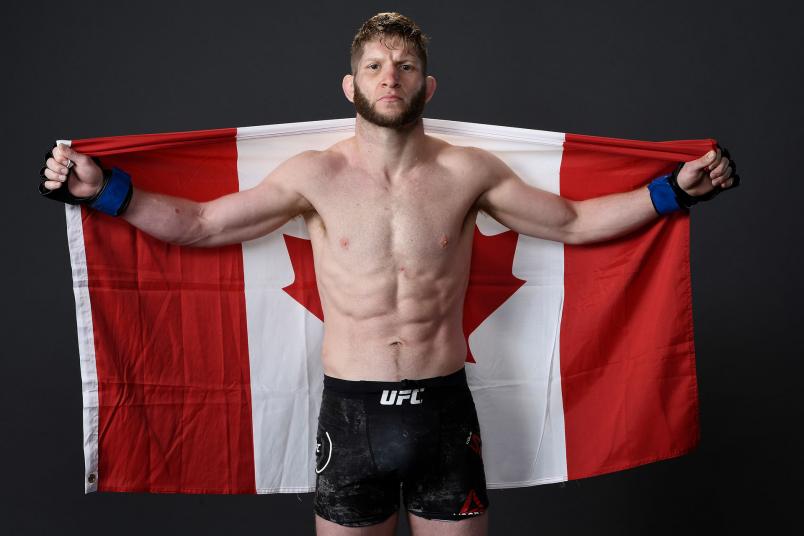 Smith poses for a portrait backstage during the UFC Fight Night event at Canadian Tire Centre on May 4, 2019 in Ottawa, Ontario, Canada. (Photo by Mike Roach/Zuffa LLC)

It's really the only way to do it if you’re going to go in an Octagon and punch somebody in the face while they’re trying to do the same thing to you. This game is hard enough as it is. You can’t take the loss back, so why not just fix the mistakes and move forward?

That’s just what the fighting pride of Squamish, BC, did, and while it’s approaching a year since his fight with Johns, Smith wasn’t about to rush his return while the world turned upside down thanks to COVID-19’s arrival earlier this year.

“I needed a full camp,” Smith said. “I lost the last one, so you kinda want to get a full camp for the next one. Also, going out to Fight Island on two weeks' notice, being from Canada makes things kind of tough. You gotta go to Vegas, then to the Middle East, and fighting at 3am. If I was further along in my UFC career and I was a total established fighter, then sign me up, I would have loved to do that. But just being so early in your career, you've got to make the right decisions.”

Would the 21-year-old Smith have jumped on the plane to Abu Dhabi?

“For sure,” he laughs. “Especially if you're getting your first offer, than yeah, of course. It would have been a cool experience.” 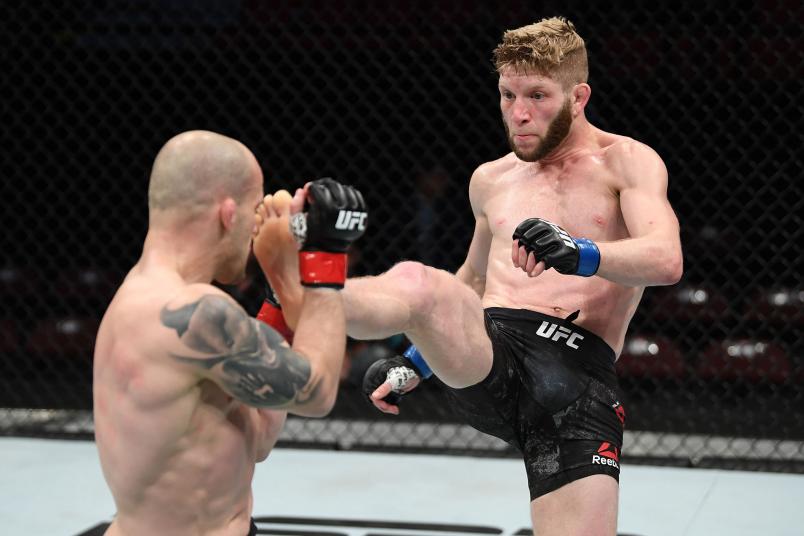 Smith kicks Mitch Gagnon in their bantamweight bout during the UFC Fight Night event at Canadian Tire Centre on May 4, 2019 in Ottawa, Ontario, Canada. (Photo by Jeff Bottari/Zuffa LLC)

But after going 1-1 in his first two trips to the Octagon, Smith was going to make sure everything was as perfect as could be when he accepted a bout with fellow prospect Hunter Azure that takes place this weekend in Las Vegas.

“This sport is weird,” he chuckles. “A huge part of it is your mental ability and dealing with that kind of stuff. You see someone who is much younger and more athletic and at the prime of their career and they lose to a guy who's a bit older because the guy is mentally stronger and has done this a million times. I think fighting is a sport where you have to be mentally mature or else you're not gonna make it very far. It's just too hard.”

Smith has made it to the big show and he’s shown to have the goods to stick around for a while, too, even if he was a bit older than most debutants. But don’t look at his 7-1 record and take him for someone not experienced enough to make a mark in the UFC. He’s been training for 11 years and has competed in Muay Thai and boxing in addition to his work in MMA. In short, he knows the business, and he knows that while a loss can hurt emotionally, it’s not the end of the journey. In fact, for “The Cole Train,” it’s just the beginning.

“There's one guy who's undefeated right now (Khabib Nurmagomedov) and he can lose the next one,” said Smith. “It's not boxing. You don't fight 30 scrubs and then you start getting to the big time. That's not how this sport is. The UFC, you're fighting the very best right away. And there's too many ways to lose. The problem with this sport is, there's so much pressure on losing and the fans are very fickle when it comes to that kind of stuff, so it makes things a little bit harder. But everybody loses and...”

He pauses, then continues.

“I'm in the UFC, man. Let's just go out and have a good time and enjoy the trip.”