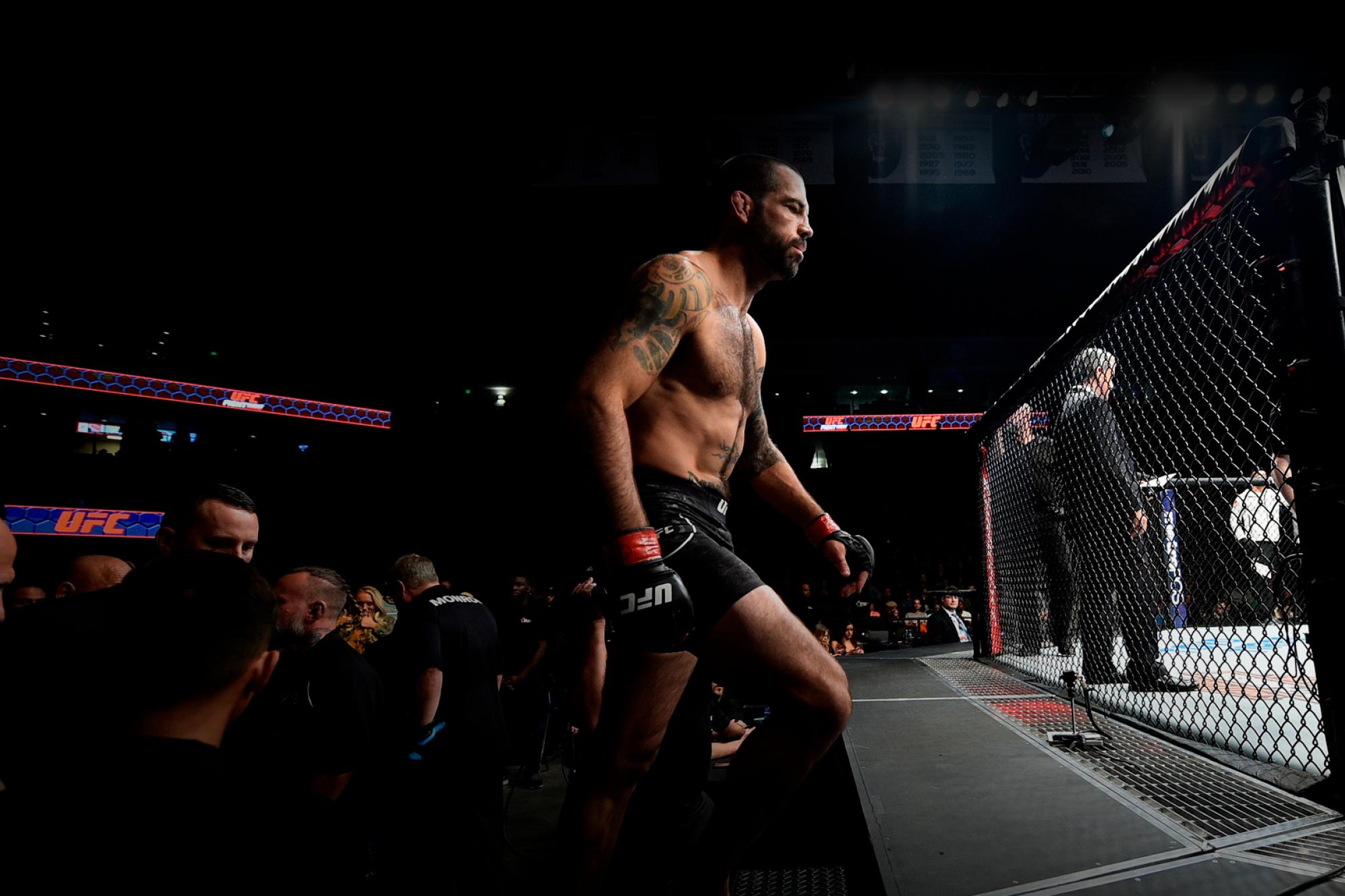 Matt "The Immortal" Brown Has Maintained A Focus Driven By Consistency And Purpose During His Career, Which He'll Put To The Test Again At UFC Fight Night: The Korean Zombie vs Ige
By Gavin Porter, On Twitter @PorterUFCNews • Jun. 16, 2021

There is only one Matt Brown.

The 40-year-old will make his 28th walk to the Octagon on Saturday against Dhiego Lima at UFC Fight Night: The Korean Zombie vs Ige. The 13-year UFC veteran feels fantastic and can’t help but crack a smile when asked how he has been able to keep the ride going since appearing on The Ultimate Fighter season 7 back in 2008.

“I don’t know,” Brown laughed. “I love this stuff, man. I love what I do, so I guess it’s just easy to get excited. This is the most fun thing in the world.” 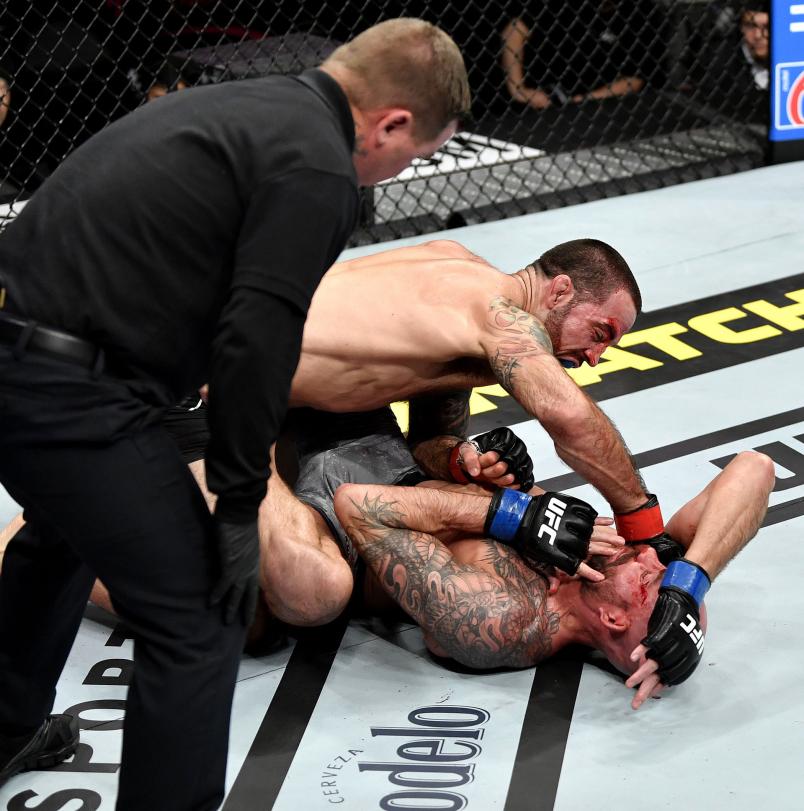 Over the years, the Ohio native has experienced plenty of ups and downs, learning each step of the way how to operate in the fight game. One of the biggest reasons that he’s still competing at such a high level is his devotion to day-in and day-out consistency. That’s the main piece of advice he shares to young fighters: be consistent through your training and most importantly do things with a purpose.

“I think a general thing that I try to tell every fighter, because you see it so rarely, is treat it like a business. Have a business model, have a business plan, have a strategy,” Brown told UFC.com.

“For example, if you’re working at a corporate job and you have a meeting with your boss the next day or with your group that you’re working with or whatever, you’d plan it out and you’d have a spreadsheet or a PowerPoint. But people come into workouts blind every day. Have intention for your workout, but I like to call it practice, not workout nowadays. Everything is all just goal, strategy, execute, rinse and repeat. I think that’s such a rare thing from what I see with young fighters.”

Brown also warns up and coming fighters to avoid the hype. He’s experienced that feeling and believes that even though it’s easy to start thinking you’re better than you are, or you know more than you truly know, that simply not buying into your own hype is the better move. Focusing on improving is the real way to stay in this game and the real way to win fights.

After dropping his last two contests, getting a win is definitely one thing that is on Brown’s mind. He knows that Lima is anything but an easy out and he expects the Brazilian to use his technical ability to dictate the pace of the fight.

“I know Dhiego fairly well. I trained with him on The Ultimate Fighter 25 when I was coaching with TJ Dillashaw. I trained Jesse Taylor to fight him in the finale and I fought Lima’s brother. I’ve been around Dhiego for a while and in different ways,” Brown said of his opponent. “I have a good idea of what to expect, but you never really know what to expect when you step in there and the lights come on. But I have a vague idea.”

In the lead-up to this bout, Lima has praised Brown and what he’s accomplished so far in the Octagon. Brown appreciates the respect, and while it’s mutual with Lima, he’s only focused on giving his foe the most difficult fight of his career. 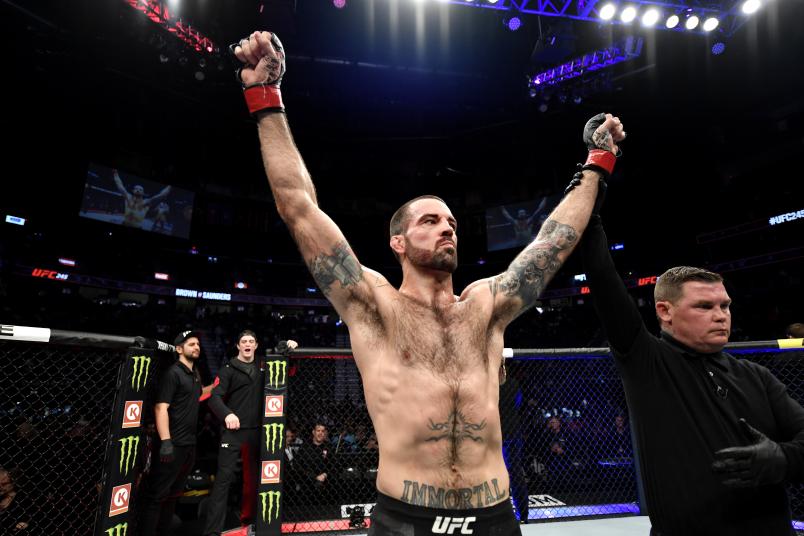 Matt Brown reacts to his victory over Ben Saunders in their welterweight bout during UFC 245 at T-Mobile Arena on December 14, 2019 in Las Vegas, Nevada. (Photo by Jeff Bottari/Zuffa LLC)

“I just think about myself; I don’t really focus on what other people are saying about me or anything like that. Ideally, you talk to them after the fight, and they don’t say [they were happy to fight me]. They say, ‘I never want to fight that guy again’ and that’s one of my intentions in a fight,” Brown said. “I want to walk out of there, win or lose, and have [Lima] say, ‘I don’t want to fight that guy again. I don’t want to go through that kind of hell again.’”

Brown welcomes those wars; he loves that feeling of digging deep. That’s why he’s not only still fighting all these years later, but it’s why he’s hoping to fight some of opponents from his past. Running it back with guys like Demian Maia, Donald Cerrone and Robbie Lawler are exactly the bouts he’s looking for.

"I know Donald Cerrone is moving down to 155 but that’s one I’ve always wanted back because he knocked me out really bad and I think it was more my fault than his doing; I just did a stupid thing. I think I could easily remedy that. And then maybe Robbie Lawler because I think he’s getting close to the end, too, and we put on a good fight, and I thought that I won that fight.” 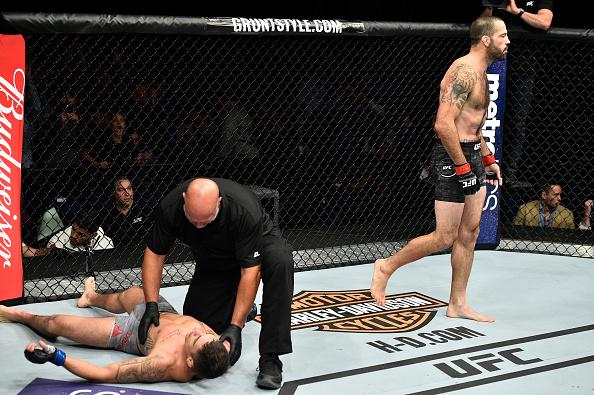 Matt Brown celebrates after defeating Diego Sanchez by KO in their welterweight bout during the UFC Fight Night event inside the Ted Constant Convention Center on November 11, 2017 in Norfolk, Virginia. (Photo by Brandon Magnus/Zuffa LLC)

And while those rematches sound like great opportunities, Brown knows he can’t overlook Lima.

“One at a time. It’s Dheigo Lima in front of me right now and I got to deal with him.”

Make sure you watch Matt Brown battle Dhiego Lima on UFC Fight Night: The Korean Zombie vs Ige on ESPN+ this weekend. The main card begins at 7pm ET / 4pm PT and the prelims start at 4pm ET / 1pm PT.