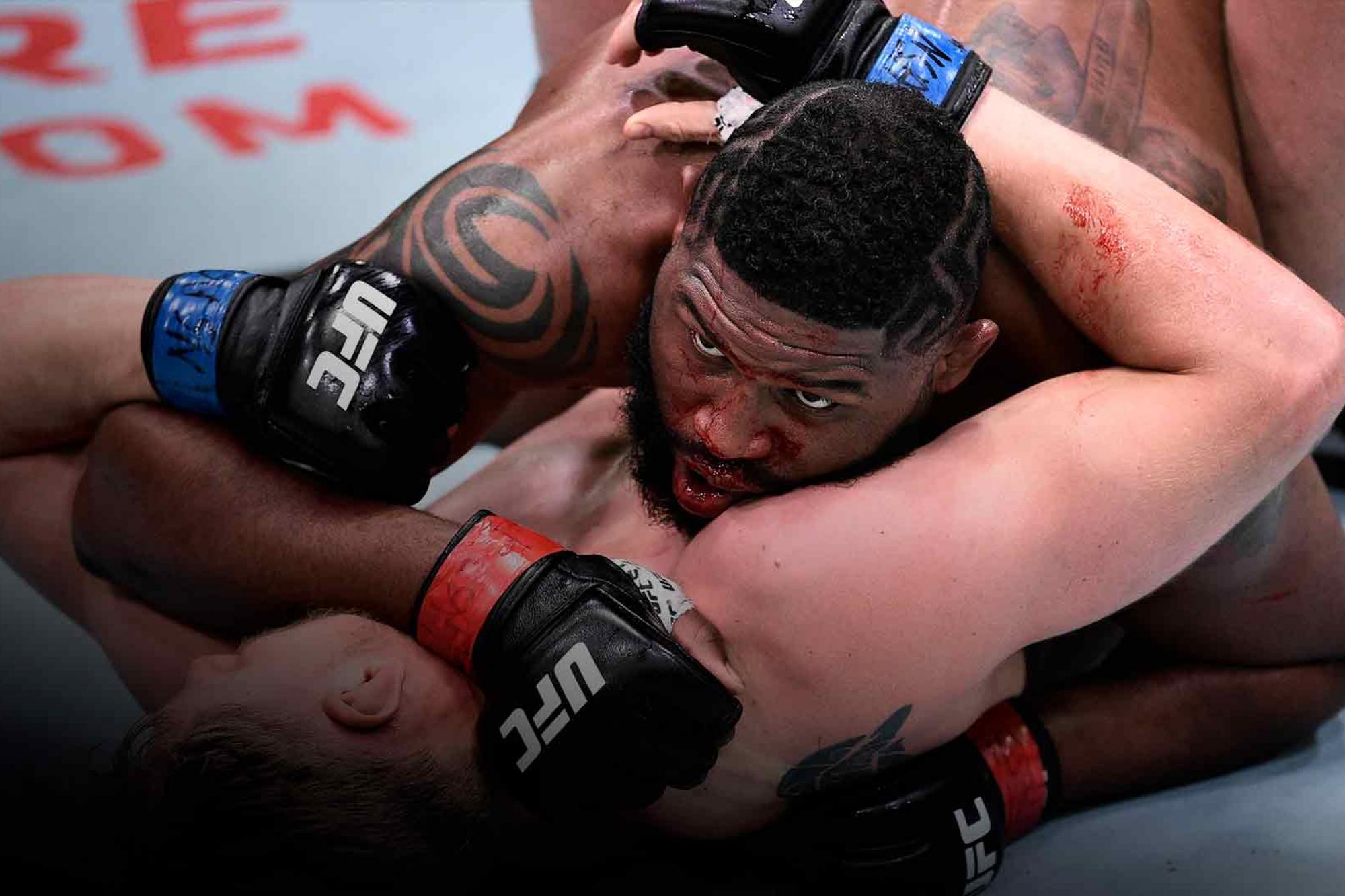 Curtis Blaydes Marches to the Beat of His Own Drum

Nothing Is Going To Make Curtis Blaydes Stray From His Game Plan At UFC Fight Night: Blaydes vs Lewis
By Gavin Porter, on Twitter @PorterUFCNews • Feb. 19, 2021

Fight fans have grown accustomed to Blaydes’ relentless wrestling and vicious ground-and-pound. So, when asked about the potential of him getting a knockout Sandhagen style, Blaydes made sure to give bettors some sound advice.

“Do not put $100 down on Curtis Blaydes by flying knee,” Blaydes joked to UFC.com.

The reason for Blaydes’ honesty is simple; he plans on using his strengths to defeat Lewis. He is well aware that some people may not appreciate his style of fighting, but it has led to undeniable success for the 30-year-old Illinois native. In his 12 UFC fights, only one man has been able to beat Blaydes, and that man is Francis Ngannou. The rest of the UFC heavyweight division couldn’t hang with “Razor” and that’s because of his wrestling.

Blaydes doesn’t care if fans can understand that wrestling is his best avenue to victory, and their opinions won’t prevent him from utilizing his best skill set.

"I wish people could understand [why I wrestle], but if they don't I'm not losing no sleep over it."@RazorBlaydes265 talks about using his wrestling to win fights and what his win over Alexander Volkov taught him 🔊⬆️ pic.twitter.com/4bR5swHAhF

“I thought people would understand me being honest and being like ‘Yo, I don’t even like to fight; I fight because they pay me well and I do enough to win.’ I never planned on being like a crazy rock ‘em sock ‘em dude because I’m too cerebral for that. I know that’s not the best path to victory and usually the best path to victory is to play to your strengths,” Blaydes said. “I’ve been wrestling since 2005, so that’s what I’m best at. I do work on my striking and I do work on my jiu-jitsu, and those skills are growing, but if I find myself in a pinch and the money is on the line, I’m going to do what I’m going to do. I wish people could understand that, but if they don’t, I’m not losing any sleep over it.”

With just how dominant Blaydes’ wrestling is, it’s easy to forget that he knocked out Junior Dos Santos on the feet just under a year ago.

“Everyone has forgotten about that fight; I swear it’s like it didn’t even happen,” Blaydes laughed. “Everyone was like, ‘Prove to us that you can knock someone out,’ and I’m thinking to myself that I did that already.”

That fight definitely showed the evolution of Blaydes, who allowed his wrestling to set up his standup game. That development has helped make Blaydes one of the biggest threats to Miocic’s heavyweight throne. When it comes to his fight with Lewis, however, Blaydes doesn’t mince words about what he plans to do. He plans to execute a similar plan to the one we saw against Aleksei Oleinik, Mark Hunt, Alistair Overeem, Shamil Abdurakimov and, most recently, Alexander Volkov.

Blaydes’ punishing style was on display last June when he faced Volkov at the UFC APEX. It was a grueling 25-minute battle of Blaydes trying to break Volkov, and while he wasn’t able to find the finish, he was able to find something within himself he knew was always there.

The ability to combine his wrestling and high Fight IQ is how Blaydes has put together a four-fight win streak heading into this clash with Lewis. This fight is one that fans have wanted to see and it’s also the only fight that made sense in the mind of both Blaydes and Lewis. Both heavyweights were disappointed that this bout, originally slated as the main event in November 2020, fell through due to Blaydes testing positive for COVID-19. But now that he’s back and the fight can finally go down, it’s a good time to be a heavyweight.

Also featured on the UFC Vegas 19 card are heavyweight bouts featuring Aleksei Oleinik vs Chris Daukaus and Andrei Arlovski vs Tom Aspinall. In just over a month, Miocic will defend his title against Ngannou at UFC 260. And there is the possibility of Jon Jones making his heavyweight debut sooner rather than later.

It’s an exciting time for the heavyweights and Blaydes feels it. But despite the fact that he may deserve a shot at the title with a statement win over Lewis, expect Blaydes to let his actions speak louder than words.

He’s just going to keep taking people out and he believes the title will come with time.

“It’s wonderful to have constant movement in the heavyweight division. It’s all you can ask for, and if I do the work and earn it, that’s all I can ask for,” Blaydes said. “A lot can happen, guys get injured, guys get sick, so I’m just going to focus on what I can focus on and present the best argument I can present on why I deserve a title shot.

“Then I’ll let the chips fall where they may.”

Those chips will start falling once Blaydes and Lewis settle the score on Saturday in the main event of UFC Vegas 19. Watch the main card on ESPN+ at 8pm ET / 5pm PT.