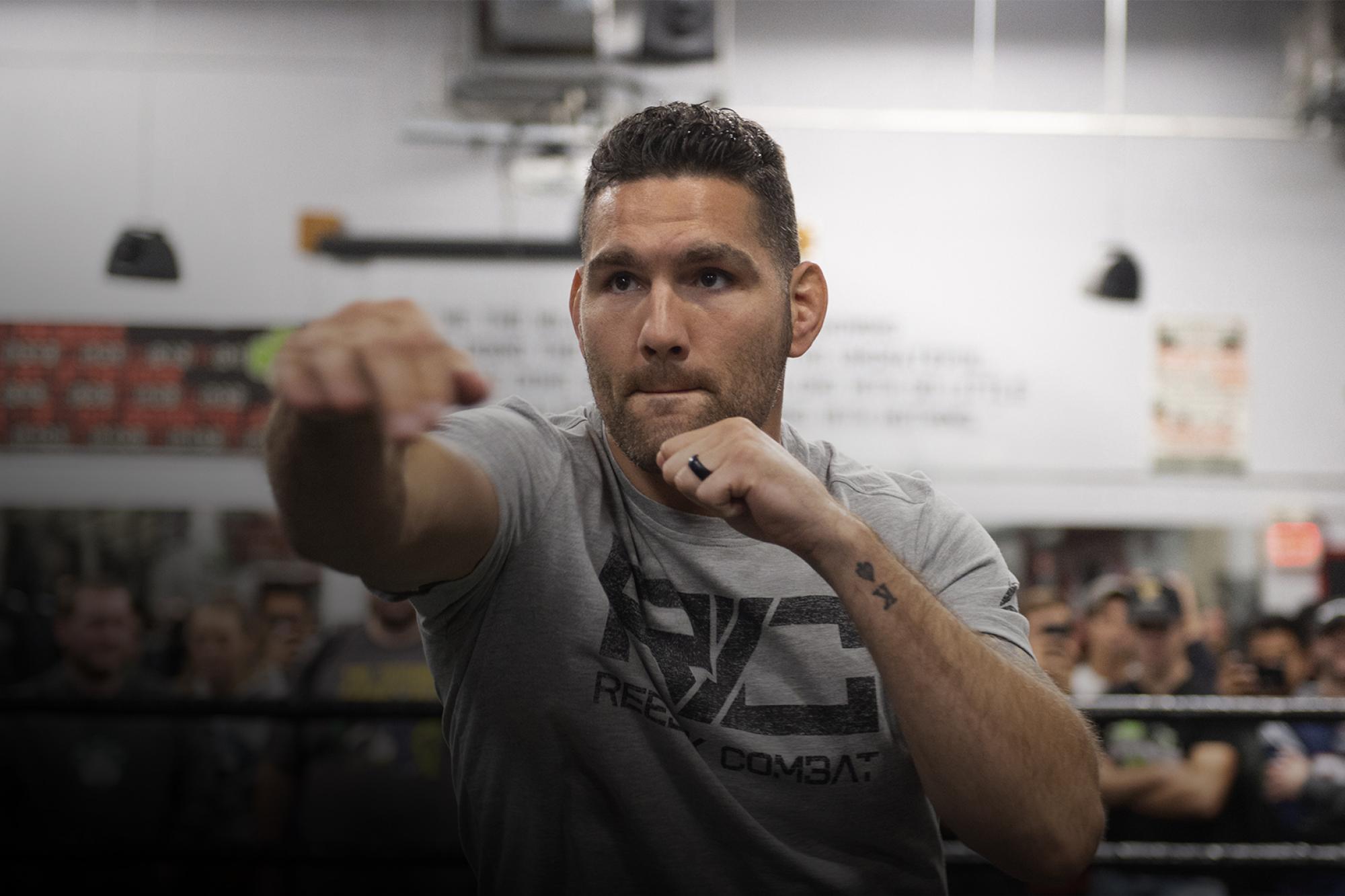 The only losses that truly upset Chris Weidman as he readies to make his light heavyweight debut against Dominick Reyes on Friday night in Boston are the surprising setbacks incurred while playing Madden against his best friend and long-time fight week road companion, Gian Villante.

“We usually play FIFA, but he brought Madden this time and I haven’t been playing Madden, so I’ve got to be honest with you: I’m down right now, which is rare because he never beats me in Madden and I’m so pissed off,” said the former middleweight champion. “We’re also playing on Xbox and I’ve been playing on PS4, so I’ve got tons of excuses.

“He’s up right now, he’s on a little streak, but I’m planning on making my comeback today.”

The reason Weidman will be able to dedicate more time to evening things out against Villante is that for the first time in his career, he’s not worrying about making the 185-pound limit.

Moving up to light heavyweight has always been part of Weidman’s plan.

Even during his time atop the middleweight division, the family man from Long Island discussed a future where he relocated to the 205-pound weight class, but in the wake of his loss to Ronaldo “Jacare” Souza last year at Madison Square Garden and dealing with another assortment of injuries and ailments, the now 35-year-old decided the time was right to file a change of address regarding where he competes.

“The main thing was injuries,” Weidman said, explaining his motivations for making the same move that helped transform Anthony Smith and Thiago Santos into title contenders. “After my last fight, my body was kind of breaking down and cutting this weight all the time, I think it was killing my body; I was always injured.

“I’m getting older and I think it was definitely taking a toll on my body, so I’m excited to see what a natural, walking around-weight me is like. I know during training I always feel great, so I think that’s the main thing.

“I’ve had a really healthy camp, which is a rare thing,” added Weidman, who officially announced his move to light heavyweight in June and was booked to face the undefeated Reyes six weeks later. “I was always very positive about my weight cuts. I always had a positive attitude about it and tried to make myself look forward to it because I knew that would make it easier, but now that I’m not doing it and I’m in another fight week, I’m now realizing, ‘Wow, I was killing myself and this is so much easier.’ I feel so much better.”

While he regrets the video game losses to Villante and has myriad excuses for why they’ve happened, the Serra-Longo Fight Team member doesn’t have the same feelings about the string of setbacks that mark the end of his time competing at middleweight.

Although his final five middleweight appearances produced a 1-4 stretch that had many discussing the possibility of Weidman changing divisions or calling it a career, each of those bouts came against elite contenders and there was no point where the former champion looked out of his depth inside the Octagon.

“Even in the fights that I’ve lost, they’re all fights that I was winning and then I got caught,” he said of the five-fight run that started with his title loss to Luke Rockhold and culminated with his loss to Souza at UFC 230. “It’s not like I’ve looked terrible in my fights and I was falling apart — I just didn’t have the results I wanted, but I was fighting well.

“My fight with Jacare, I looked really good, was dominating that fight and I got caught with a big punch, which can happen to anybody.”

A further testament to Weidman’s continued faith in his abilities is the fact that he makes the move to light heavyweight by stepping into the cage with one of the top emerging talents in the division in Reyes, who carries an 11-0 mark that includes five straight UFC victories into their headlining clash on Friday in Boston.

Few would have batted an eye if Weidman opted to take the temperature of the 205-pound waters to start, understanding his desire to get a training camp, weight cut and fight in the new division under his belt against a less impressive opponent, but that’s not the route he’s taken. Instead, he’s diving head-first into the deep end of the talent pool, eager to find out where he fits in his new division.

“This career is going to be short — I’m not going to be doing it forever — and I want to go against the best guys there are so I can look back and know that I didn’t shy away from any challenges,” explained Weidman, who has faced an opponent ranked in the Top 10 in each of his last 11 appearances, with Friday’s bout bringing that total to an even dozen. “Dominick Reyes is an amazing challenge — an undefeated kid with a lot of hype behind him — and I’m excited to go out there and test myself.

“I accomplished my goals at middleweight,” he added. “I became the undefeated middleweight champion and I defended my belt multiple times. I lost it and the goal was to get it back, but I wasn’t extremely excited about that because I had already done it, so to have something completely new and exciting on the forefront is exciting.”

Thus far, no one has been able to defeat Reyes, whose head kick knockout win over Jordan Powell went viral and prompted a call to compete in the UFC.

Since then, the former Stony Brook University football standout has maintained his winning ways, posting a trio of quick stoppages during his rookie year on the roster to establish himself as someone to watch and following that up with decision wins over divisional stalwarts Ovince Saint Preux and Volkan Oezdemir during his sophomore season to secure a position in the championship chase.

Although he’s quick to acknowledge Reyes’ toughness and talent, Weidman is confident that he can take his unbeaten foe into deep waters in Boston and start this next chapter of his UFC career with a victory.

“I want to just go in there and break him,” Weidman said. “He super-excited right now — jumping around, it’s the main event — and I want to put him in a dark spot in that fight to where he realizes, ‘This is not what I expected. I’m down, I’m gasping for air, I’m not as excited as I was and this guy isn’t just a middleweight coming up — he’s a real problem — and am I going to lose my first fight.’

“That’s where I want to put his brain. I just want to drag him into deep water and just drown his ass.

“Knowing that people are doubting me and the world is against me is where I love to be,” he added, “so I’m excited about the future and getting a dominating W on Friday is going to be huge.”