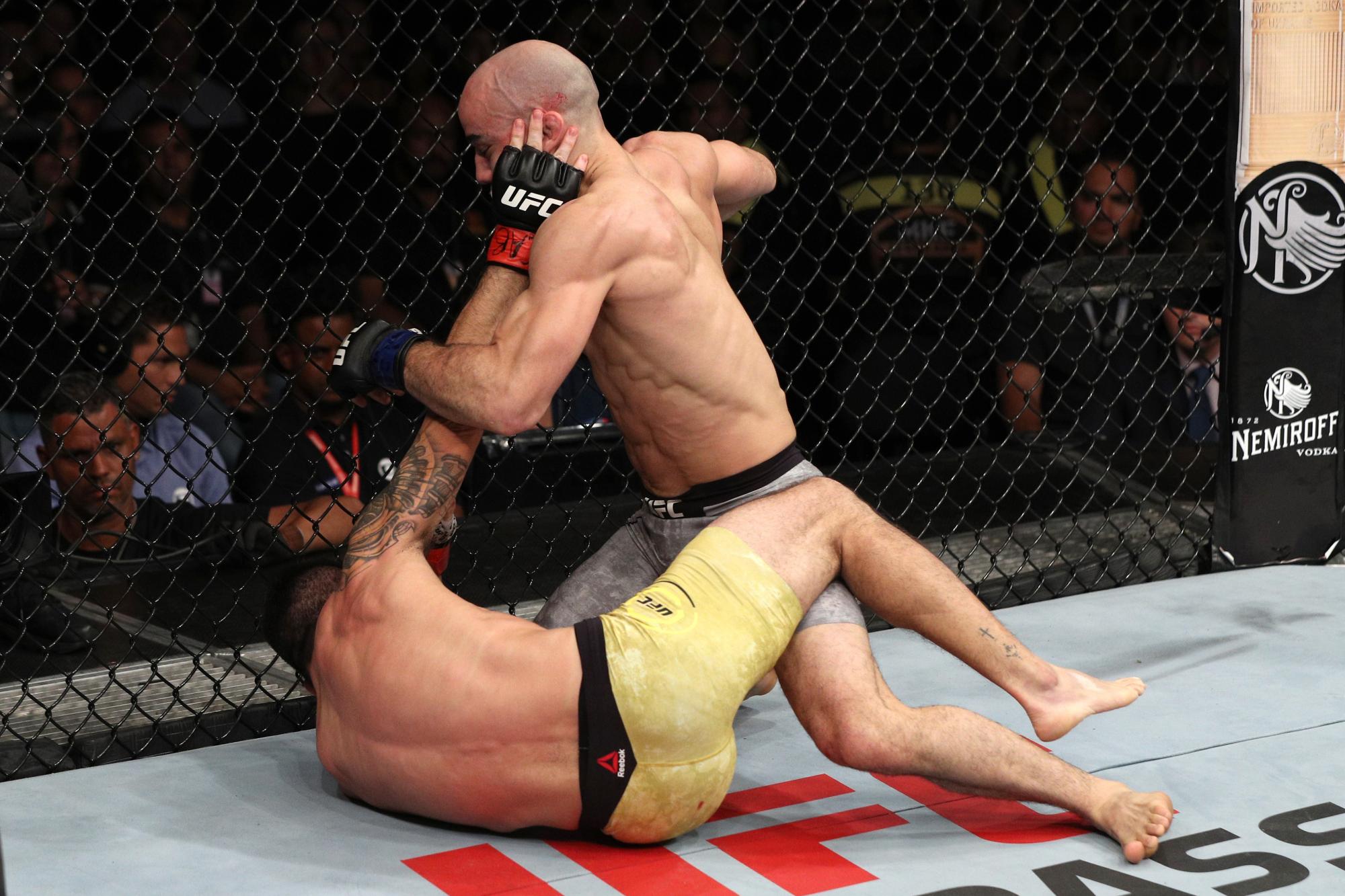 With three consecutive first-round finishes of top bantamweight contenders, Marlon Moraes made an air-tight case for a shot at TJ Dillashaw’s 135-pound crown on Saturday, as he submitted longtime standout Raphael Assuncao in the UFC Fortaleza main event at Arena CFO.

Nova Friburgo’s Moraes started the bout pecking at Assuncao with kicks to the leg, but it was two right hands upstairs that rocked and dropped Recife’s Assuncao with 2:55 left in the opening round. Moraes went to work with ground strikes before ultimately locking in the guillotine choke that forced Assuncao to tap out at 3:17 of round one.

If this is to be the final year of Jose Aldo’s career, the featherweight icon got 2019 off to a spectacular start, as he halted rising star Renato Moicano in the UFC Fortaleza co-main event at Arena CFO on Saturday.

The first round was tense as the two featherweights stood inches apart from each other and looked for openings to strike. When they did engage, the exchanges were quick and of a high-level, but neither fighter was able to take a significant edge.

There would be no such war of nerves in the second round, though, as Aldo jarred Brasilia’s Moicano with a left hand and refused to let his foe off the hook, as he followed his opponent around the Octagon, throwing strikes to the body and head every step of the way. Finally, another unanswered barrage against the fence forced referee Jerin Valel to stop the fight 44 seconds into round two, sending Rio de Janeiro’s Aldo leaping into the crowd to celebrate.

Maia’s game plan was clear, and he implemented it perfectly, as he got a quick takedown then took Good’s back as the New Yorker rose to his feet. Holding on to Good’s back, Sao Paulo’s Maia worked for a rear naked choke and ultimately got it, forcing Good to tap out at 2:38 of the opening round.

The UFC’s all-time submission king added to his tap out tally, as Charles Oliveira finished David Teymur in the second round of a wild lightweight bout.

An inadvertent eye poke by Teymur brought a stop to the bout in the opening minute of the fight and cost Teymur a point from referee Jerin Valel. Moments later, Oliveira claimed that he was poked again, but Valel waved the fighters back into action. A knockdown by Teymur followed, but Oliveira fought well off his back, bloodying his foe before getting back to his feet. Oliveira then went on the attack to get Teymur to the mat, and while he didn’t succeed, he did land some hard shots over the course of the frame.

Oliveira didn’t waste any time ending the fight in the second round, as he first hurt Teymur with a short elbow. Teymur turned his back and surprisingly the fight wasn’t stopped as Oliveira landed with a series of unanswered blows. But Oliveira found another way to get the victory, as he took Teymur down and locked in the anaconda choke that forced the Swede to tap out at :55 of round two.

As cool as ever, Walker strolled to the middle of the Octagon and then scored with a kick before dropping Ledet with a spinning back fist. As Ledet tried to roll out of trouble, Walker threw a kick that would have likely disqualified him if it landed, but it didn’t, and the follow-up punches on the downed Texan ended the bout, with referee Eduardo Herdy calling an end to matters at the 15-second mark.

In the main card opener, Livinha Souza made it 2-0 in the Octagon with a close split decision victory over newcomer Sarah Frota.

Souza got the takedown in the opening minute, with Frota defending well and getting back to her feet, where she eluded a choke attempt and ended up in the top position as they went to the mat again. Souza did lock in an armbar, but Frota smoothly escaped and they rose, continuing to battle it out for the rest of the round.

Frota briefly wobbled Souza with a right hand in the opening minute of round two, but “The Brazilian Gangsta” responded moments later with a takedown. After some more mat exchanges, it was back to the feet, with Frota doing good work against the fence and with her strikes. Souza was relentless though, and soon she had her opponent’s back and was firing away with strikes before nearly ending the fight with a rear naked choke.

The back-and-forth action resumed in the third, with both strawweights engaging on even terms until the final horn.

A clash of middleweight prospects saw Markus Perez emerge victorious, as he submitted previously unbeaten newcomer Anthony Hernandez in the second round.

Both fighters had their moments in the first three minutes, but Perez landed the first big shots of the round with two minutes remaining, as he fired off a combination that bloodied and rocked Hernandez. Hernandez shook off the blows and got back into the fray, scoring well in the final 30 seconds of the frame.

A body kick from Perez hurt Hernandez seconds into round two, and the Brazilian immediately sought a submission. Hernandez appeared to get free, but a subsequent anaconda choke attempt wasn’t going to be denied, with Hernandez forced to tap out at the 1:07 mark.

It only took Santos (15-1) a minute to get Borella (12-5, 2 NC) to the mat, and the Brazilian locked on her opponent’s back, even as the Italian stood. Borella escaped and got a takedown of her own, moving quickly into side control, and she kept control for the majority of the rest of the round.

Much of the second round was fought in the clinch against the fence, with little significant action to speak of. The first stalemate led to a restart from referee Camila Albuquerque with 1:30 left, yet the clinch work resumed with just one respite until the horn sounded.

Santos finally showed off some significant striking in the third as she kept separated from her foe and controlled the standup action, but it was too little too late on two of the three scorecards, as Borella took the decision via scores of 29-28 twice and 28-29.

The crowd erupted every time Alves threw something, but the aggressive Griffin rocked him in the opening minute and unloaded with both hands as Alves covered up. A subsequent clinch bought the “Pitbull” some time, but he emerged with his face marked up from the striking of Griffin. Sacramento’s Griffin kept the pressure on once the two separated, and he mixed his strikes up nicely to the head and body, nearly ending the fight with a right hand that dropped Alves just as the horn sounded to end the round.

In need of a change in momentum, Alves went on the attack in the second round and rattled Griffin with kicks and punches. Griffin fired back, but then decided a takedown would be the best course of action. Alves fought off the attempt and in the final minute he hurt Griffin again and the crowd roared.

A spinning elbow by Alves in the second minute of the final round led to a takedown by Griffin, and while the Brazilian rose quickly, Griffin brought him back to the mat just as fast. With under two minutes left, Alves rose and went to work again. Griffin put the fight on the mat as the seconds wound down, but it wasn’t enough to get the nod on the scorecards, which went in Alves’ favor.
Jairzinho Rozenstruik def Junior Albini via TKO, Round 2, 0:58
Social Post

Albini wasted no time getting the decorated kickboxer to the mat, and he locked on a kimura but let it go to move into the mount. Rozenstruik was able to escape and get back to his feet, but Albini scored another takedown and then took his foe’s back. Rozenstruik again fought loose and got to his feet but wasn’t able to rattle Albini before the end of the stanza.

That changed in the second round, as Rozenstruik pushed off a takedown attempt and then followed up with a lightning-fast barrage of punches and a kick that put Albini down. More shots were fired off by Rozenstruik, with referee Joao Claudio Soares stepping in to call a stop to the fight at :54 of round two.

De Freitas’ path to victory was established early in the fight and he stuck with it for the entire bout, as he would rattle Colares with strikes on the feet, then control matters on the ground with well-timed takedowns. And while Rio’s Colares was game for all 15 minutes, he couldn’t figure out the attack of Minas Gerais’ de Freitas.

Said Nurmagomedov def Ricardo Ramos via TKO, Round 1, 2:28
Social Post
A change of scenery from flyweight to bantamweight didn’t slow Said Nurmagomedov down, as the Russian rising star stopped Ricardo Ramos in the first round.
Nurmagomedov started working his kicks from the start, and after finding his range, a spinning kick to the body visibly hurt Ramos. As Ramos backed up to the fence, Nurmagomedov pounced, with a barrage of shots sending the Brazilian down and prompting referee Joao Claudio Soares to step in and halt the contest at the 2:28 mark of round one.
With the win, Dagestan’s Nurmagomedov moves to 13-1. Sao Paulo’s Ramos falls to 12-2.
Rogerio Bontorin (29-28, 29-28) def Magomed Bibulatov (28-29) via split decision.
Social Post

Contender Series alum Rogerio Bontorin got the night off to a good start for Brazil, as he scored an upset three-round split decision win over flyweight contender Magomed Bibulatov.

Bibulatov was able to secure a pair of takedowns in the first round, but Bontorin was unbothered by the trips to the mat, as he jumped back to his feet after the first one and then nearly finished Bibulatov with a rear naked choke the second time around.

The No. 11-ranked Bibulatov added another takedown to his ledger in the second frame, and coupled with effective striking, it allowed him to edge the round.

Bontorin stayed close, landing some solid shots on his foe in the third and scoring a takedown in the final minute, and that was enough for him to score the close victory on the scorecards.