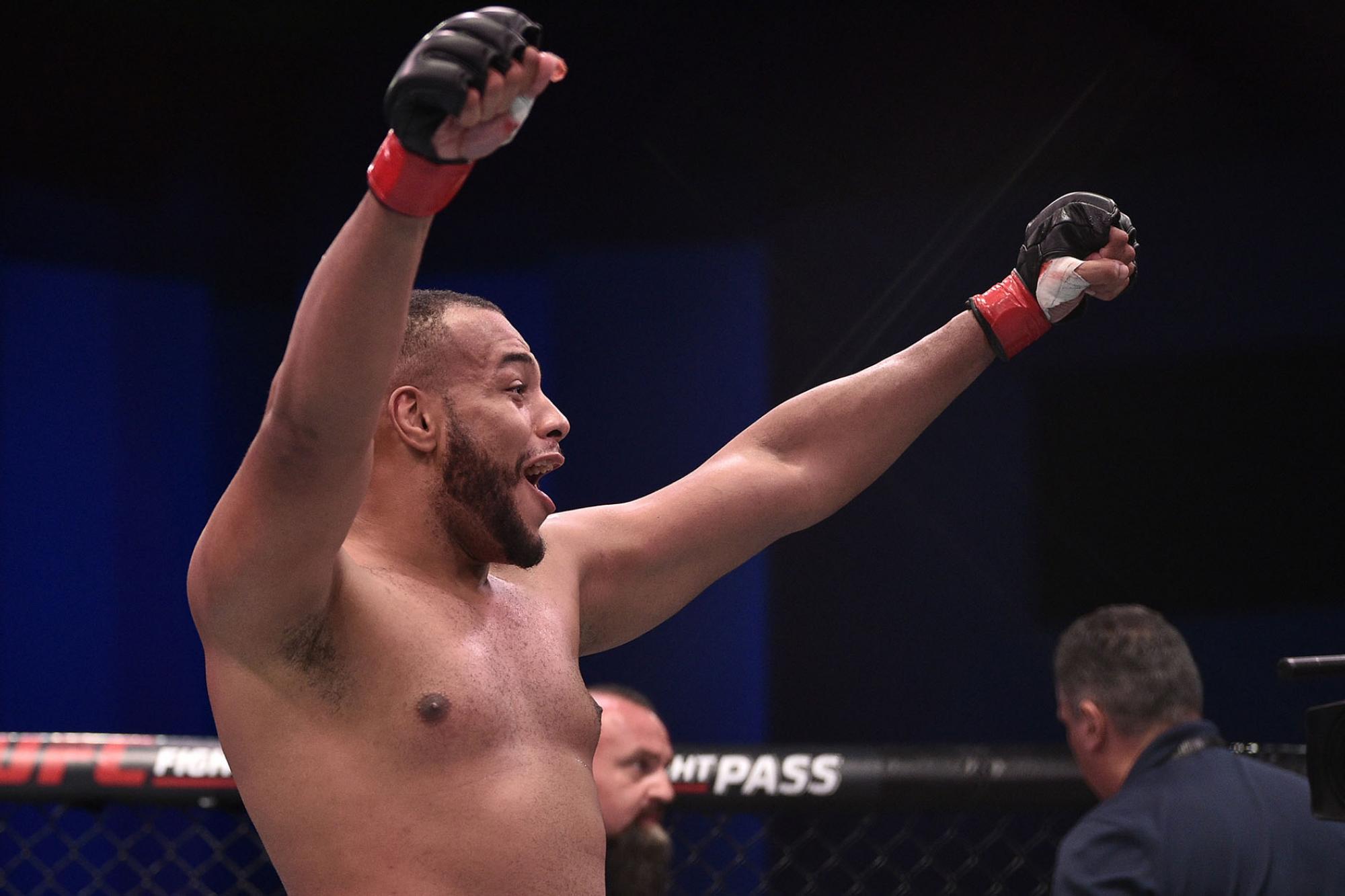 Fighters On the Rise: 5/16 edition

Saturday night, for the third time in eight days, fighters will make the walk to the Octagon inside the VyStar Veterans Memorial Arena in Jacksonville, Florida as part of an event that will close out the UFC’s impressive return to action.

Headlined by the rescheduled heavyweight clash between Alistair Overeem and Walt Harris originally slated to take place in Washington, D.C. last December and supported by a pivotal strawweight clash between Claudia Gadelha and Angela Hill and the featherweight debut of Edson Barboza, who squares off with Dan Ige, this weekend’s fight card is flush with exciting and intriguing pairings.

Included in those matchups are a tetra-pack of relative newcomers who competed on the Contender Series and are looking to use this fight card as a chance to connect with the UFC audience and propel themselves forward to bigger and better as the year moves on.

Here’s a closer look at those fighters in the latest edition of On the Rise.

“Fluffy” looked outstanding in his Contender Series victory over Jordan Wright during Season 2, pushing his winning streak to seven at the time with a 40-second stoppage win over the similarly unbeaten hopeful.

Unfortunately for Hernandez, the result was overturned after he tested positive for marijuana in his post-fight drug screening and upon returning to action eight months later in his UFC debut, he was handed the first loss of his career when he was choked out by fellow former LFA middleweight champ Markus Perez.

Hernandez rebounded with a second-round Anaconda choke victory of his own in his sophomore appearance in the Octagon, rekindling optimism about his upside and putting him in position to make some headway in the division in 2020. He already has a victory over the streaking Brendan Allen under his belt from their days fighting under the LFA banner and Saturday night, he can pick up another quality victory as he takes on Kevin Holland in the final preliminary card bout of the evening.

Holland had his three-fight winning streak snapped last time out — by Allen of all people — and was slated to face Welsh veteran Jack Marshman in London before that event was scuttled by the COVID-19 pandemic. Now reset and ready to return to the cage, the 27-year-old Texan will serve as a strong challenge for the talented, but still largely unproven, Hernandez as he looks to build some momentum in the middleweight division.

The 27-year-old Davis has two losses in his career — one to Sodiq Yusuff in their Contender Series bout, and the other to Gilbert Burns in his short notice UFC debut.

When the only cats that have bested you through the first 10 fights of your career are one of the top featherweight prospects in the promotion and a white-hot Brazilian veteran you faced up a division with limited prep time, it’s pretty clear that you’re doing something right.

Davis confirmed his standing as a serious prospect in his sophomore appearance in the Octagon back in October, giving Thomas Gifford the business through the opening 10 minutes before finally putting away the incredibly resilient Arkansas native late in the third with a clean right hand that left Gifford face down on the canvas.

Watch All The Action On ESPN+ | UFC Records - Most Finishes

Saturday night, the Orlando native gets another fight in his home state as he squares off with former standout kickboxer Giga Chikadze in what should be an entertaining matchup between two skilled strikers. Chikadze has earned back-to-back victories since getting called up to the UFC and four straight since dropping his own Contender Series audition.

The loss to Yusuff slowed Davis’ climb momentarily, but he’s rebounded nicely and showed how dangerous he is with his blistering effort against Gifford last time out. If he does something anywhere close to similar against Chikadze on Saturday, except to hear his name being tossed around in the collection of top emerging talents in the 145-pound weight class going forward.

The third Contender Series alum and first to hit the cage on Saturday is Nascimento, a 27-year-old Brazilian heavyweight with a perfect 7-0 mark, who takes on fellow Contender Series grad Don’Tale Mayes.

Nascimento spent nearly two years on the sidelines prior to his appearance in Las Vegas last summer, but the time off didn’t seem to have an impact on the native of Belo Horizonte though, as he strolled into the Octagon and submitted unbeaten Czech heavyweight Michal Martinek in a little over three minutes.

Standing six-foot-three and brandishing an 80-inch reach, Nascimento has intriguing size and length for the division to go along with the grappling skills he displayed last summer. Though he didn’t face much high-level competition prior to his bout with Martinek, the Brazilian has done what any hopeful needs to do in those situations, handling his business without any miscues and keeping things moving forward at all times.

This matchup with Mayes will be a solid test for the undefeated UFC newcomer as “Lord Kong” is a hulking figure who will have a three-inch height advantage, one-and-a-half-inch reach advantage and has flashed menacing power at times. Though he’s coming off a loss, Mayes showed improved conditioning in that bout with rising star Ciryl Gane and had won four straight prior to that setback.

If Nascimento can maintain his winning ways and score another stoppage victory, he’ll put himself on the list of fighters to watch in the heavyweight division as the UFC ramps up its schedule in the second half of 2020.