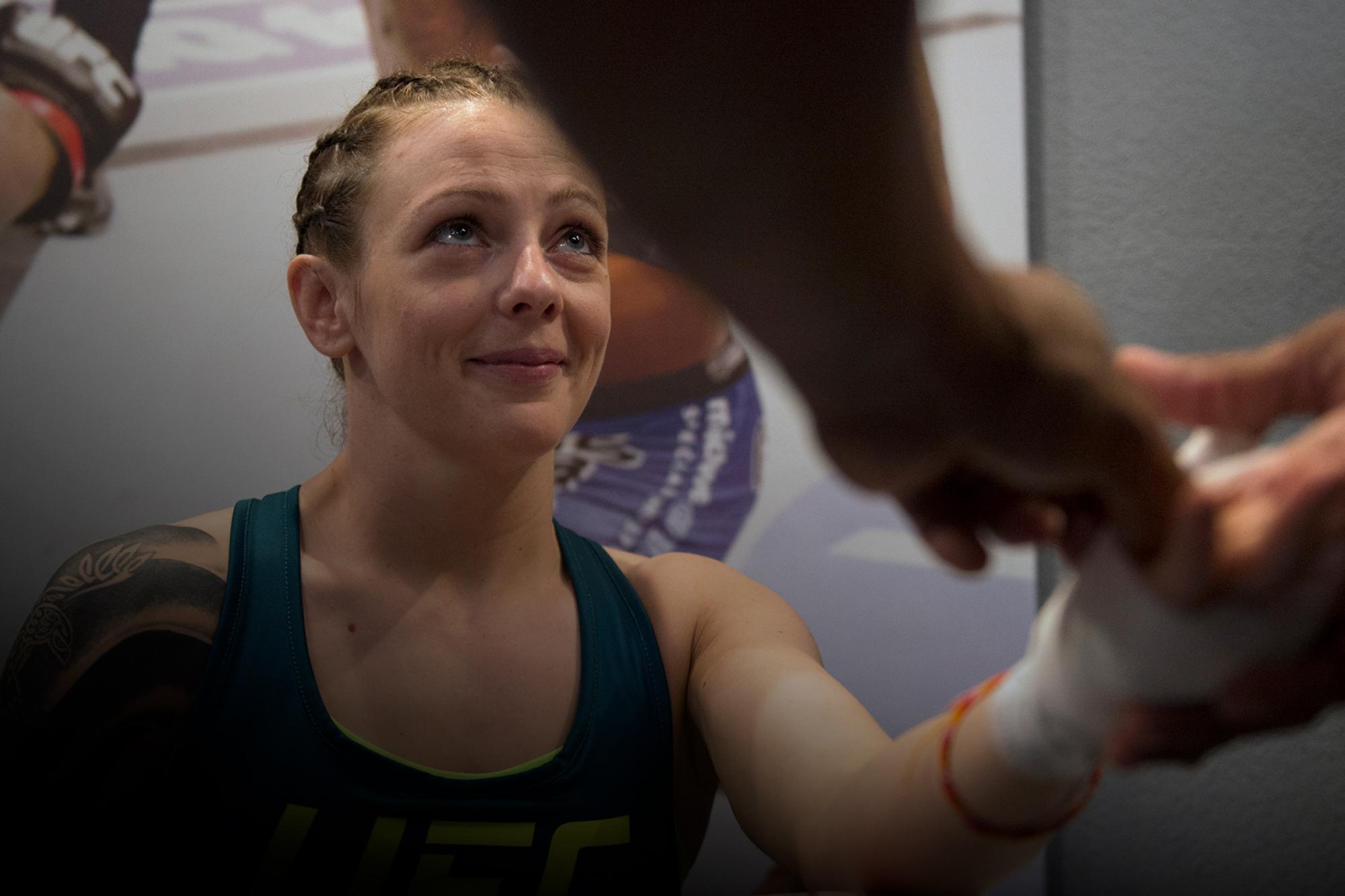 Flashback: Joanne Calderwood makes it to the world stage

In Honor Of The Flyweight Veteran's 34th Birthday, We Take A Look Back To When She Joined The UFC
By Thomas Gerbasi, on Twitter @tgerbasi • Dec. 23, 2020

It’s hard to believe that Joanne Calderwood has been in the UFC for six years already, but it’s true, and Scotland’s “JoJo” has the 11 fights in the Octagon and the No. 7-ranking in the flyweight division to prove it.

It seems like it was just yesterday when she joined the cast of The Ultimate Fighter 20 and made it to the quarterfinals, and while we await her return against Jessica Eye at UFC 257 next month, what better time than her birthday to look back at a day when we introduced Ms. Calderwood to the UFC faithful?

At least according to Wikipedia, the sheer amount of nicknames is impressive: JoJo, Cyborginho, Dr. Kneevil. But the best moniker for The Ultimate Fighter 20 competitor Joanne Calderwood may be one not even listed on her Wiki page: 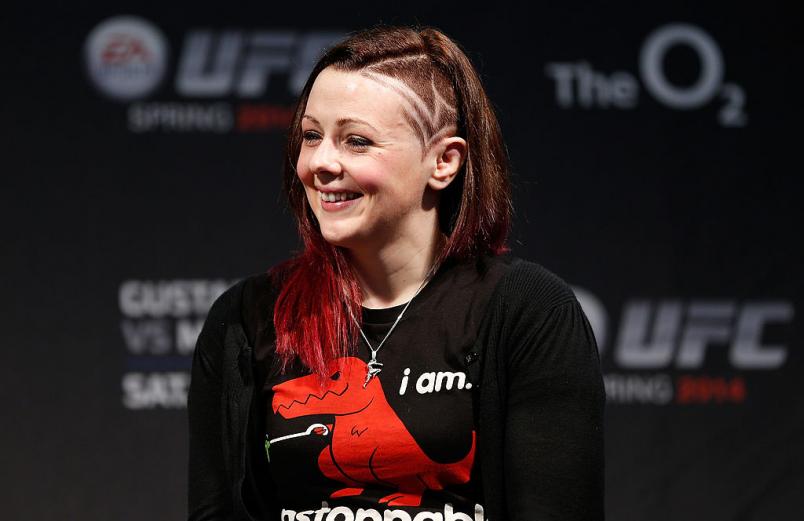 Joanne Calderwood interacts with fans during a Q&A session before the UFC weigh-in event at the O2 Arena on March 7, 2014 in London, England. (Photo by Josh Hedges/Zuffa LLC)

“I’ve been called that before,” she laughs, and that’s no surprise at all, because one conversation with the soft-spoken fighter from Kilmarnock, Scotland will make you wonder how it’s possible that once the bell rings on fight night she becomes someone capable of sending an opponent crashing to the canvas with one swing of her fists, feet, or knees.

In short, if you want to stand and trade with the Muay Thai ace (and the owner of a 19-2 kickboxing record), do so at your own peril. Just don’t expect her to announce it.

“Every day, my team and my coaches tell me this, but the person I am, I’m just trying to get better and I never see myself as being better than any other girl,” said Calderwood when asked about a striking game that is among the best in the WMMA game. “I’m just making sure that I’m being the best I can and training every day like I’m not the best. Every day I’m in the gym, I’m training like these girls can beat me at any time. And that keeps me focused. Obviously it’s good to hear the fans, my coaches, and my teammates saying that (about her striking), but what I want to hear at the end of the day is that I’ve won and I’ve performed. I need to beat everyone in the division and I’ll still probably not feel like I’m better than everyone. I’m always looking to the next fight.”

In a few weeks, Calderwood will have plenty of fights to look forward to, and they’ll be against most of her division, as she participates in the first all-female season of TUF. It’s not just historic for that reason, but also because at the end of the tournament, the UFC’s first strawweight champion will be crowned. So with 16 of the best 115-pounders in the world in one house and one tournament, this will truly be must-see TV. 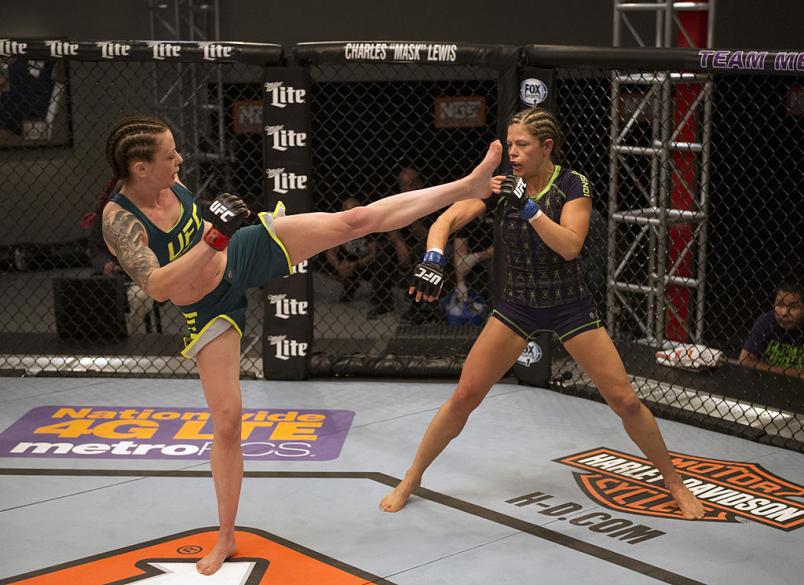 “It’s a gateway to introduce the division because people will get to know everyone and their personality, so it’s perfect,” said Calderwood, who laughs when asked if she’s already started scouting the other seven ladies already chosen for the show (the other eight competitors will be selected from the recent tryouts in Las Vegas).

“I’m trying. I think about it every day. I’ve fought a decent amount, and I’m nervous but I’m more excited than nervous.”

In addition to her 21 kickboxing bouts, the 27-year-old is 8-0 in mixed martial arts, making it clear that she has the experience necessary to do well on TUF. Still, this is a trying experience like no other, but she believes that she has the right stuff to get through it.

“I think my mental game is my best part,” she said. “I’m always positive, and always remaining within myself. It’s tough, especially when you’re training, but you have to stay positive and I think that’s the way I get through it. This is going to be really tough, being in the house, training and living with all the girls, but I’m going to remind myself that this is the experience of a lifetime and that this is what I want to do, so I always put positive thoughts in my head and it will keep my mental game strong.”

In fact, the only concern you might have for Calderwood is that being under the bright lights and dealing with all the added media attention could throw her off her game. But the Silent Assassin has already received a dose of the UFC madness when she traveled to the Alexander Gustafsson-Jimi Manuwa event in London earlier this year.

“I went down there for the week, so I got a taste of it,” she said. “I was doing five things a day from the Thursday to the Saturday and I was like ‘this is a totally different ballgame.’ (Laughs) But I don’t really think you can prepare yourself for it, especially myself, because I don’t really like the attention that comes outside of the cage. I think I just like the fighting part, but I know it’s part of the job. As long as I keep reminding myself that I’m getting to do what I love as a job, so I can be doing ten interviews a day, but at the end of the day I’m getting to train, I’m getting to wake up and do what I love, so there’s nothing negative about it. It’s not a bad thing.”

And being the Queen of Scotland, so to speak, when it comes to MMA, has prepped her well for being the center of attention. 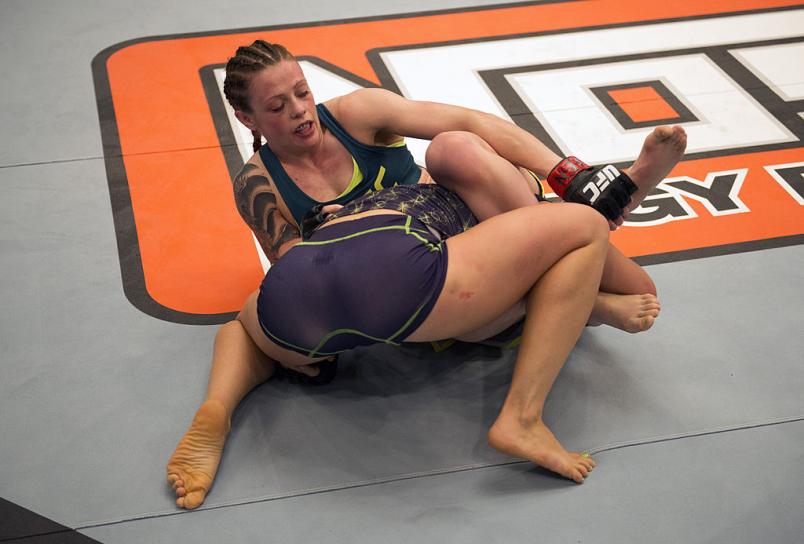 “When I had my first professional fight, it was crazy, so I know that it’s going to be a lot more crazy,” she said. “You just have to deal with it. You’re a professional athlete and it’s your job.”

Another part of the gig, especially with women’s MMA taking off over the last few years, is being not just a fighter, but a role model. Calderwood embraces this aspect of her job.

“Every time I go out and I perform, inside and outside the cage you have to be a professional athlete and remember that there are going to be girls and boys who are just starting MMA looking up to you, so you have to be the best person you can be and just be yourself. And that’s what I’ve always done.”

Six weeks in Vegas won’t change that either.

“I hope people see the real person that I am,” said Calderwood of her upcoming stint on TUF 20. “I’m quiet outside the cage, but I can perform in the cage, and that’s the best thing that I can do. And that’s really what fighting should be. You should be good at your job inside the cage and you don’t have to be a loudmouth outside of it. You can sit back, be quiet, and be the person you are, and respect every opponent you come against.”