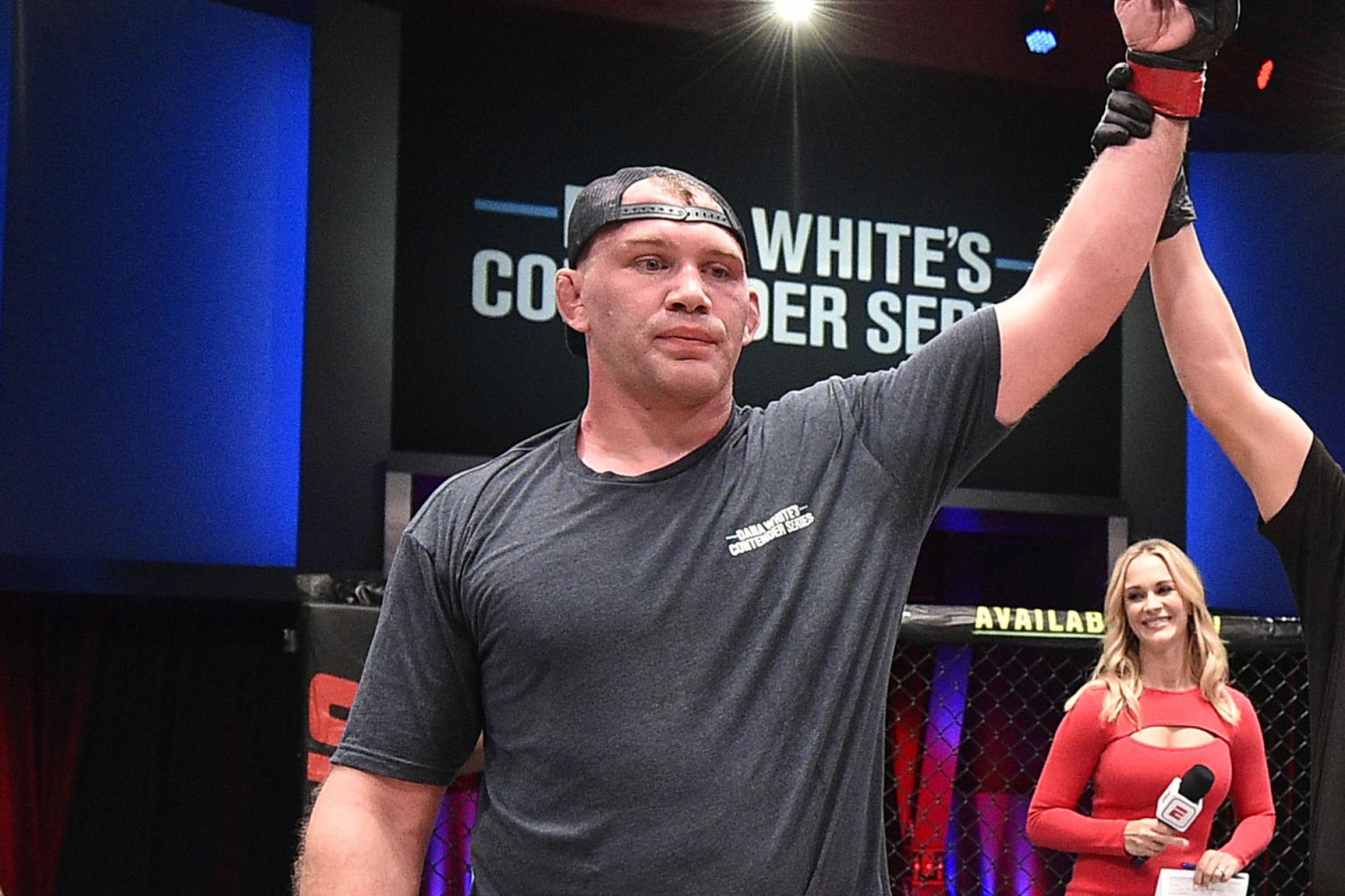 Jared Vanderaa: Shooting For The Stars

Jared Vanderaa Expects To Make A Splash In His UFC Debut Against Serghei Spivac At UFC Fight Night: Blaydes Vs Lewis
By THOMAS GERBASI, ON TWITTER @TGERBASI • Feb. 19, 2021

UFC newcomer Jared Vanderaa isn’t someone who wants to waste anytime on his way to the top of the heavyweight ladder.

It’s why he accepted his debut fight last December a little over a month after earning his contract with a win over Harry Hunsucker on Dana White’s Contender Series.

It’s also why he called out established UFC heavyweight Serghei Spivac and didn’t take the conventional “whoever they give me” route.

It may even be why when asked what it means for him to fight in the UFC, he said, “Fighting for the UFC would mean one step closer to fighting Overeem and going for the gold.”

“I've actually been an Overeem fan so I would like to fight him,” Vanderaa said. “That whole statement, your idols become your rivals, it's kind of like that. I've always been a fan. He's predominantly a striker, but he's mixing it up and I like the fact that now he's training with Curtis Blaydes. I like the dude. I think he's a really cool guy, and he's not the best in the world, but he's always top notch. He's still pretty high up there and he's been there for over a decade now.”

Meet Jared Vanderaa, 28 years old, fighting out of Hemet, California, and ready to take on the world in his own unique way. 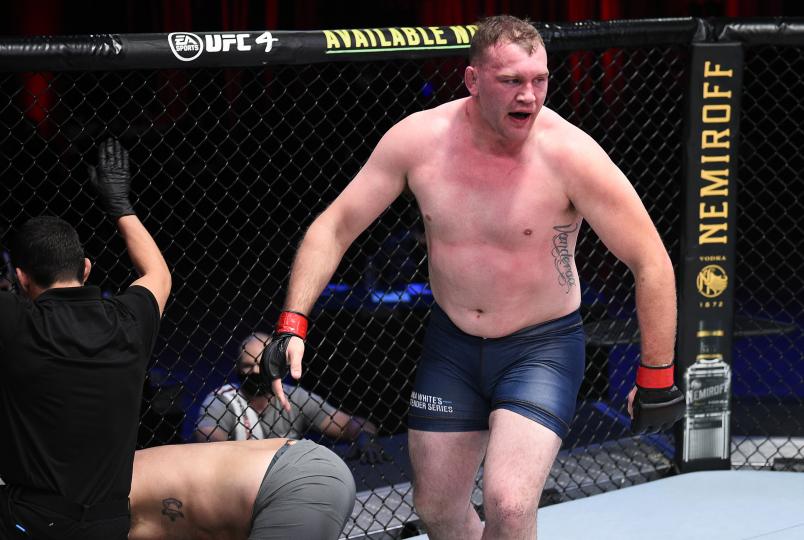 That means that the fight with Spivac didn’t happen last December, but will happen on Saturday night in Las Vegas, and while it marks the official start of his UFC career, when catching up to him before what was scheduled to be that start, he was a bit subdued.

I asked him why, considering that he was now a UFC fighter.

“I just got done rolling on top of another one not too long ago, so I want to recover a little bit,” he laughed.

That’s life with the Team Quest squad in Temecula, a 45-minute drive from Vanderaa’s home in Hemet. In that gym, it’s practically a UFC event every sparring day, which made Vanderaa wonder why he hadn’t been in the promotion earlier than late last year. 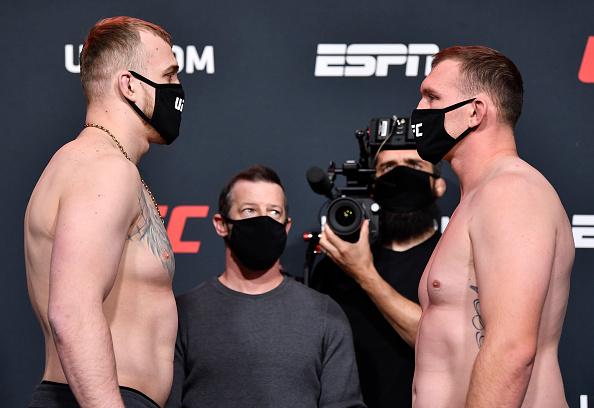 Opponents Serghei Spivac of the Ukraine and Jared Vanderaa face off during the UFC weigh-in at UFC APEX on February 19, 2021 in Las Vegas, Nevada. (Photo by Chris Unger/Zuffa LLC)

So when he got the call in 2017 to travel to South Africa to fight for the EFC promotion, he didn’t hesitate to take the offer.

“They watched my first LFA fight and they needed someone to go at their heavyweight and I was like, you know what, let's do this, let's have fun. And I jumped on the opportunity.”

Vanderaa would lose a five-round split decision to Andrew van Zyl in Pretoria, but he was invited back and wound up fighting three more times in South Africa, winning the EFC heavyweight title in December 2018 by halting UFC vet Ruan Potts in the third round.

Two years later, he had a UFC contract, but while that’s the Reader’s Digest version of the story, in between was plenty of soul searching.

“It was getting harder as my life was going by, but I told myself if I'm not in the UFC by 30, it might be time to hang it up or focus my skillset elsewhere,” he said. “I was considering taking two or three years off MMA and just focus on doing Muay Thai and try to go the route of Glory.”

That wasn’t necessary, as his win over Hunsucker stamped his ticket to the big show, and if you couldn’t tell already, he’s amped up to start taking on the best of the best in the Octagon, even if he doesn’t necessarily believe a win over Spivac will be enough to get him knocking on the door of the top 15.

“I feel like if I beat Spivac, I don't feel like I really jump into these rankings too much,” he said. “I don't feel like I move at all. I’ll feel like, oh, I'm a guy in the UFC. I feel like I can go out there and fight Josh Parisian or Parker Porter or someone tells me, ‘Hey, fight Andrei Arlovski or Tanner Boser.’ Or if something happens, fight someone with a bigger name. ‘This person pulled out, fight Overeem.’ I'll do it. I don't see him (Spivac) as a top competitor. Half the reason is, it comes down to I was supposed to fight him two, three years ago. So I don't look at him as this guy that has weight over me. He's a guy that's just some dude.” 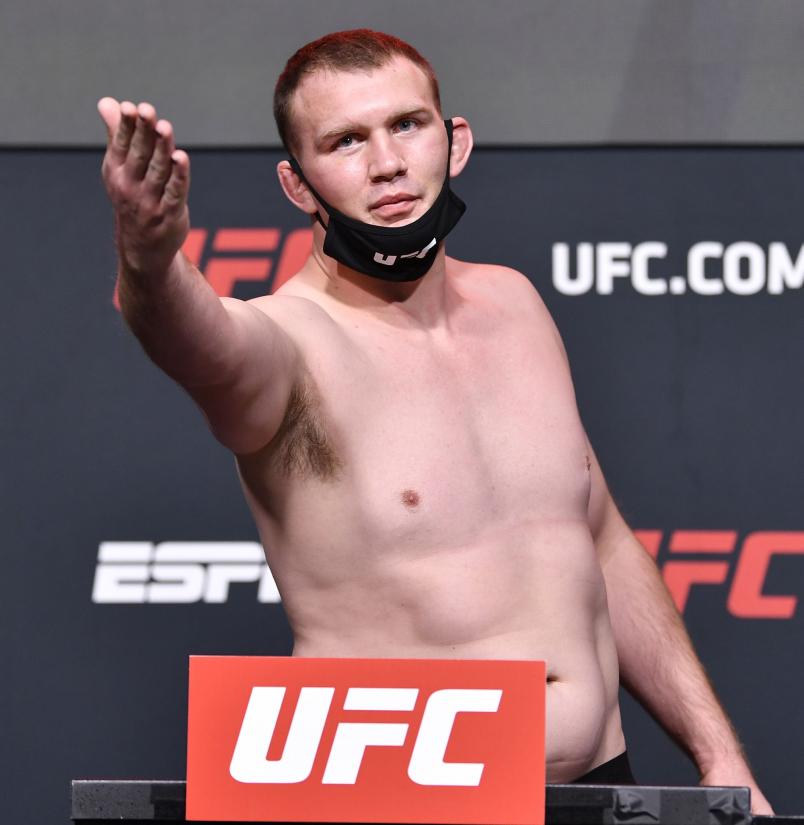 Jared Vanderaa poses on the scale during the UFC weigh-in at UFC APEX on February 19, 2021 in Las Vegas, Nevada. (Photo by Chris Unger/Zuffa LLC)

At this point, you have to love Vanderaa’s attitude, because there’s no BS in his DNA.

“There's a lot of that somewhere,” he laughs. “Just not right now.”

That’s okay, we’ll take what we can get and, for the moment, enjoy the fact that the heavyweight division has some of the best prospects in the sport, from Chris Daukaus and Tom Aspinall, to Vanderaa and Alexandr Romanov.

“I think a lot of people are sleeping on the heavyweight division,” said Vanderaa, who has high praise for fighters like Ciryl Gane, Jairzinho Rozenstruik, Tanner Boser and Josh Parisian.

But…and there’s always a but with Vanderaa, he has his own take on why the heavyweights aren’t getting the respect he thinks they deserve.

“I think a lot of people are sleeping on some of the heavyweights because aesthetically and visually, we are not the most appealing group of people,” he deadpanned. “People watch the heavyweights for the instant knockouts, but when you get fighters that are able to grapple or strike at a higher level, you take away that one-strike knockout possibility and now you have to bring something to the table. Now if you're just looking fat, I kind of fit that mold. I'm not in the best of shape visually. I don't have the back obliques, the 52 abs, and people want to see that from fighters. If you don’t have that, the mystique and the scariness kind of fades. Then you look at Overeem, Francis (Ngannou), and you're like, 'Damn, he's scary.' There's a mystique to these gentlemen.”

Luckily for Vanderaa, who vows to have a six-pack one day, abs never won a prizefight.

Talent, grit and determination have, though, and he’s got plenty of those attributes. Just watch him on Saturday night for proof.