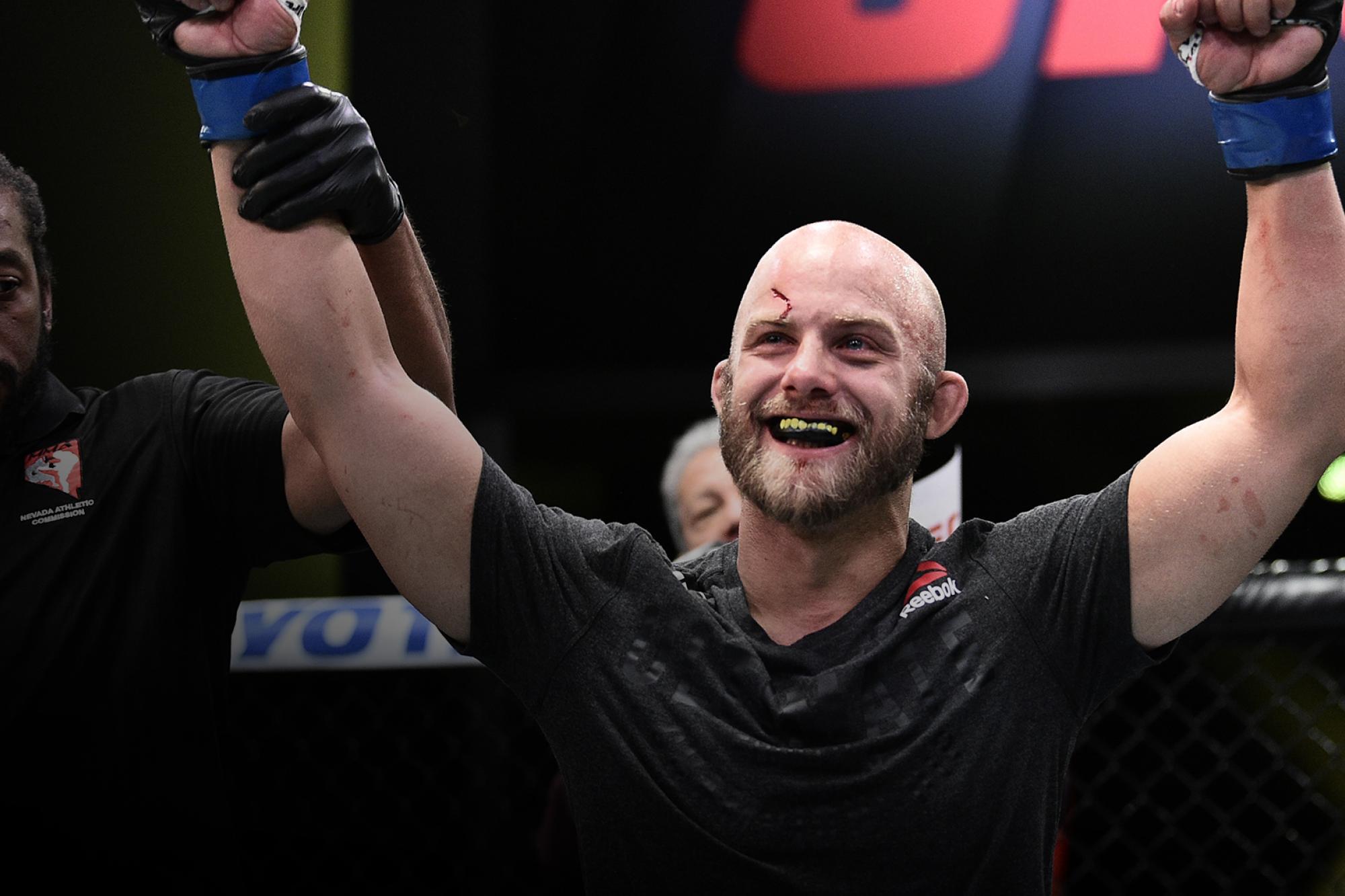 Justin Jaynes' UFC debut was life changing, now he's reset his goals and is ready to get back in the Octagon at UFC Vegas 6.
By Zac Pacleb, on Twitter @ZacPacleb • Aug. 5, 2020

Everything leading up to Justin Jaynes’ UFC debut – and “everything” in this case involved about three days - moved at lightspeed, so it made sense that the fight itself only lasted 40 seconds. A pair of left hooks and follow-up shots on Frank Camacho later, and Jaynes found himself a UFC victor and a Performance Bonus winner.

“I made chicken salad out of chicken s***,” Jaynes told UFC.com. “Throughout my career, I’ve never been dealt pocket aces, I guess, in my career. It’s always me working so hard to get to a point, taking two steps forward and three steps back, and that’s been the whole M.O. of my career. I get four, five wins in a row, tons of finishes, and then I take a short notice fight on two weeks’ or one week notice, and I lose a decision. This new light – back on a five-fight, first-round finish win streak, it’s just an incredible feeling. I can’t really describe it.”

Jaynes’ short-notice win in June was the second-fastest debut win in UFC lightweight history, and less than a month later, he’s set for an encore. This time, the bout takes place at 145 pounds and with a much more proper build-up that has Jaynes soaking in the experience. He only found out about the fight a few weeks ago, but when your first UFC bout comes together in less than a week, having three weeks has Jaynes feeling like this is his “real debut.”

“I get to study my opponent,” Jaynes said of the difference between his first and second UFC fights. “I get to put a half-assed training camp together. I get to game plan. I get to let it all sink in. I get to talk to all the podcasts and all the reporters about what my plan is and what’s going on. It’s a lot better, but again, I wouldn’t change my story for anything. My life changed within two days forever. It’ll never be the same.”

His story up until that point was one not uncommon in the regional ranks. In 19 professional bouts up until that point, Jaynes was 15-4 with a decorated record that featured several first-round finishes with a few stumbling points along the way. As is also common in the mixed martial arts world, Jaynes has seen his fair share of unique circumstances as well.

After losing a short-notice bout to Tommy Aaron in 2017 – a loss that snapped a five-fight winning streak – Jaynes wasn’t sure whether he wanted to keep pursuing this grind of a life. His circle convinced him to get back on the saddle, though, and a few months later, Jaynes got a first-round win via fence grabs. Weird, but what mattered was it helped Jaynes regain some traction in his pursuit of a shot at the UFC.

“When you think about a year or two back into training, back to dealing with the injuries, back to dealing with the heartache and the disappointment, it’s not guaranteed,” Jaynes said. “No fight is guaranteed. It’s like, do I really want to do that? Because of my team, I gotta thank them for keeping me honest, keeping me diligent. Now it’s like, f***, a whole weight has been lifted off my shoulders. I’m re-sparked. I’m re-motivated. It’s a new Justin Jaynes that all these guys have to face now.”

The first man to face the new Justin Jaynes is Gavin Tucker, a sharp, 34-year-old Canadian fighter who is 2-1 in three UFC bouts. He recently returned from a 22-month layoff after suffering his first career loss to submit SeungWoo Choi in the third round at UFC 240. 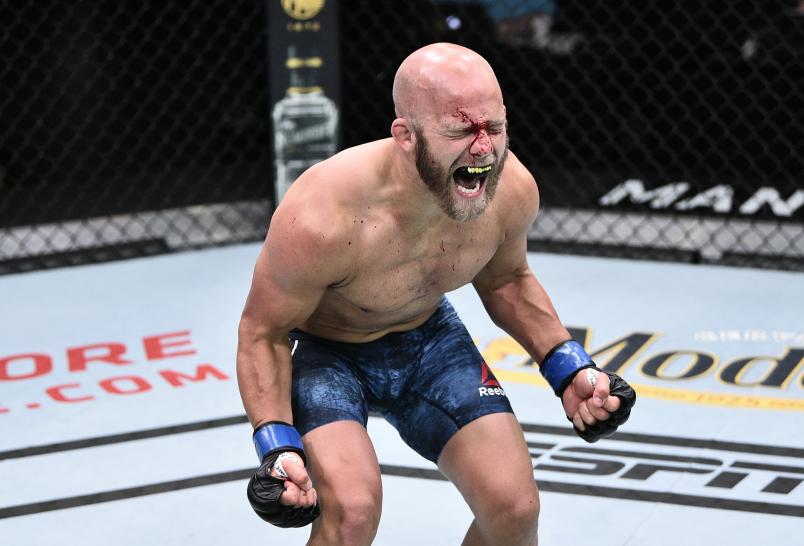 Justin Jaynes reacts after his victory over Frank Camacho in their lightweight bout during the UFC Fight Night event at UFC APEX on June 20, 2020 in Las Vegas, Nevada. (Photo by Chris Unger/Zuffa LLC)

The bout, taking place at featherweight, is an interesting matchup, and when Jaynes is asked about his foe, he has nothing but shining praise to share.

“I love talking about Gavin Tucker,” Jaynes said. “I’m obsessed with Gavin Tucker. I’m a fan of Gavin Tucker. It’s an honor to fight Gavin Tucker. I never heard of him prior to be matched up against him, but watching his videos, watching him as a person, his life, how he lives as a person, he’s not a dirtball. He’s a f****** good dude, and he’s so f****** tough. He’s so fast, and his angles are so crisp, and he’s such a good striker. He’s a black belt in jiu-jitsu and his wrestling in his last fight was on point.”

Talk to Jaynes long enough, though, and you understand the kind of confidence he carries. Part of it comes from that show-stealing debut, but a lot of it comes from his experiences. Since he was a high school wrestler in Michigan helping teach his skill set to mixed martial artists to rooming with former UFC lightweight Daron Cruickshank, Jaynes has been around the sport for a long time.

He evolved from a self-described “boring” fighter who just wanted to score takedowns to an all-action brawler with a propensity for ending fights in the first round while sporting supreme confidence in his chin. Jaynes hasn’t been finished as a professional, and with that in mind, his game plan more or less revolves around a couple foundational ideas. 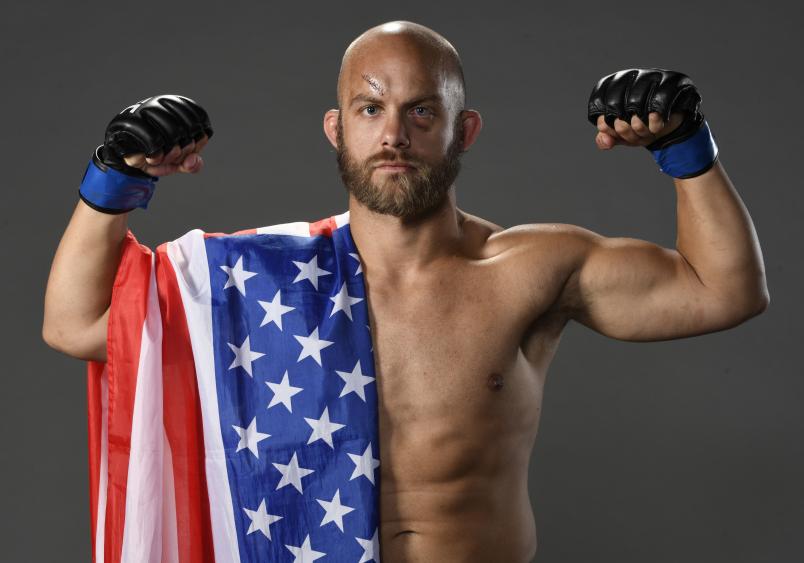 Justin Jaynes poses for a portrait backstage after his victory during the UFC Fight Night event at UFC APEX on June 20, 2020 in Las Vegas, Nevada. (Photo by Mike Roach/Zuffa LLC)

That’s easy enough to keep in mind as Jaynes makes that second walk to the Octagon on August 8. When he does get there, the “Guitar Hero” – a nickname he thought was dead in the water until Bruce Buffer brought it back for his debut – expects to give fans yet another entertaining bout to watch for as long as it lasts.

Few moments in sports are as enthralling as an out of nowhere underdog seizing his moment, but how they follow up on that headline-making moment is at times just as critical in terms of their longevity in that newfound spotlight. It’s a moment for which Jaynes waited and worked years to make, and he’s excited to see what kind of magic he can make happen next.