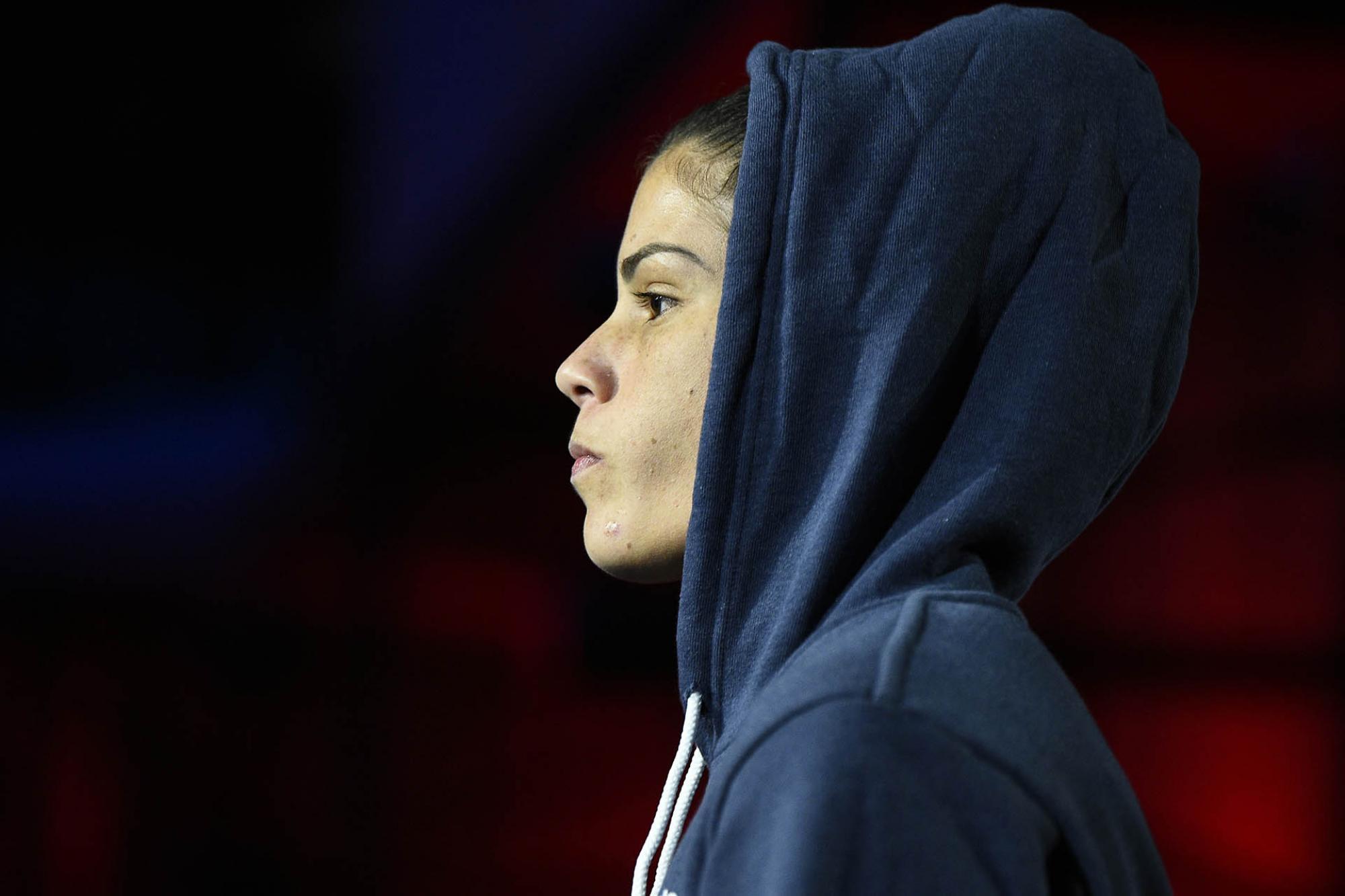 When Luana Pinheiro makes the walk to the Octagon for her promotional debut this weekend against Randa Markos, the Brazilian newcomer doesn’t expect to feel any of the usually pre-fight jitters or pangs of uncertainty because she’ll do so in a familiar setting that so far only holds positive memories.

The 27-year-old strawweight earned her chance to compete in the UFC with an impressive first-round stoppage victory over Stephanie Frausto last November on Dana White’s Contender Series. Six weeks ago, she accompanied her boyfriend, UFC flyweight Matheus Nicolau, to the cage as he made a successful return to the promotion with a split decision victory over Manel Kape.

Both contests took place inside the UFC APEX, making Saturday’s venue feel just like home for the exciting new arrival to the 115-pound ranks.

“It was really nice to be there with him and feel the adrenaline rush again; it was a warm-up to my fight,” said Pinheiro, who carries a six-fight winning streak into her bout with Markos. “But I believe it wasn't something very new because I fought the Contender Series.”

Though some might believe the impact of having familiarity with everything that transpires during Fight Week and what it’s like to make the walk to the Octagon is overstated, speak to enough competitors about that initial trek to the UFC cage and most will tell you that it hits a little different.

Regional shows don’t come with the same obligations as competing on the biggest stage in the sport — there aren’t usually poster signings and media sessions, outfitting appointments, photo shoots, or early morning weigh-ins streamed live and covered with greater detail than many of the smaller shows that propelled these athletes onto the UFC radar in the first place.

Knowing how things work, having positive experiences venturing from the dressing rooms to the Octagon inside the APEX can all build a sense of comfort and calm that many debuting fighters don’t get the opportunity to enjoy.

That experience can be invaluable, especially given that Pinheiro’s road to the Octagon took a detour.

She and Markos were originally slated to compete at UFC 260, two weeks after Nicolau’s return engagement, but the Canadian veteran was removed from the card due to COVID protocols and the bout was rescheduled for this weekend. 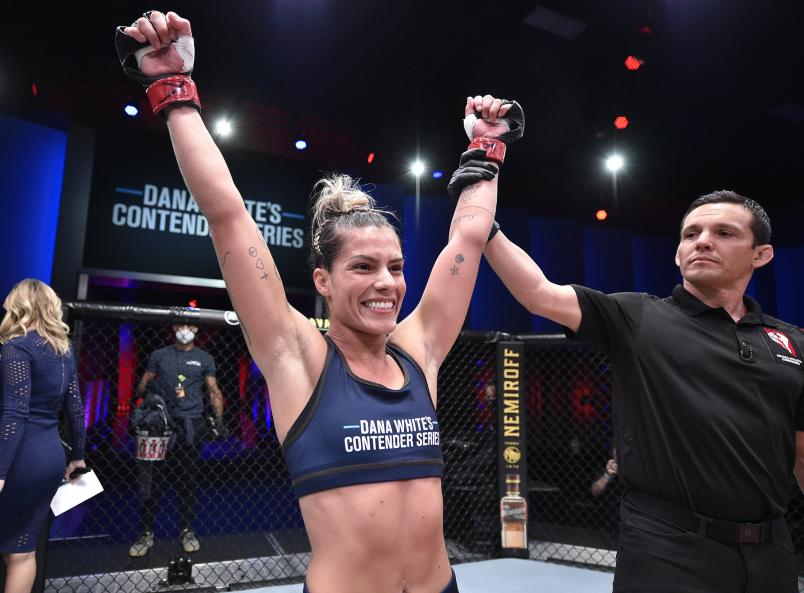 An alteration like that could throw a newcomer for a loop but, to her credit, Pinheiro appears to have taken it all in stride.

“I believe things happen when it has to happen; maybe it was it was not the time yet,” she said of the bout being postponed in March. “I try to see from the positive side, the good side of things. I had more time to prepare and sharpen my weapons!”

And Pinheiro has considerable weapons.

A black belt in judo and brown belt in Brazilian jiu-jitsu now based in Rio de Janeiro, the Contender Series graduate carries an 8-1 record into her showdown with Markos, having successfully stopped each of her last six opponents before the close of the opening round.

“I'm a girl born on the mats!” she said energetically, proud of her upbringing in martial arts. “I started practicing judo at the age of two with my father. My fighting style is increasingly adapted to MMA — I want to be a complete fighter — so I work every day in search of my evolution.

“I'm passionate about challenges and I know that to become a world champion, I have to fight the best, so I'm super-excited to start this new trajectory.”

A fixture in the strawweight division since its inception, the 35-year-old Markos made a surprising run to the semifinals on Season 20 of The Ultimate Fighter and has fought a who’s who of talent in the 115-pound ranks ever since.

Though she’s struggled as of late, entering Saturday’s contest on a three-fight slide, the Iraqi-born “Quiet Storm” has switched up her training this time around, doing the majority of her fight camp in Texas, where she’s worked with the likes of Lauren Murphy, Bi Nguyen, Kru Bob Perez, and the group at Team Lutter.

Despite her recent struggles, Pinheiro knows Markos represents a major step up in competition from the foes she’s vanquished on the road to the Octagon and has prepared accordingly.

“Randa is the biggest challenge of my career, and a fighter that I respect very much,” began the Brazilian. “She has a lot of experience and many more fights than me. When I didn't even dream of fighting MMA, she was already fighting. 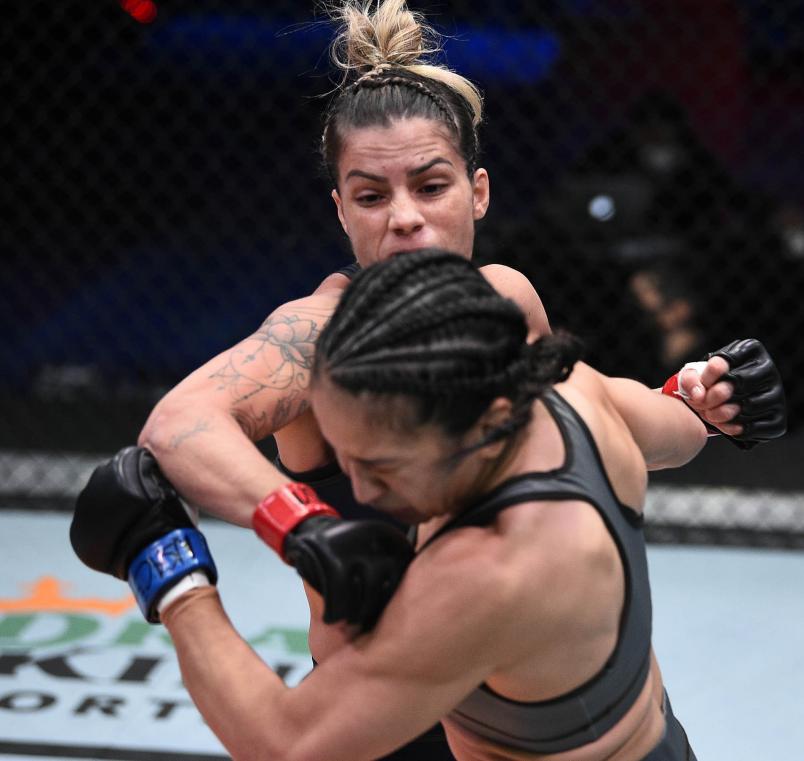 “For me, it's very challenging and exciting — debuting (in the UFC) and already fighting with a veteran.”

It’s been a whirlwind six-month stretch for Pinheiro, who went 361 days without a fight before toppling Frausto and earning her UFC contract.

Now, after an extended layoff, everything has come flooding forward, one opportunity after another, resulting in a dynamic victory in front of UFC President Dana White, a chance to compete at the highest level in the sport, and to potentially make immediate waves in the strawweight division by knocking off one of its longest tenured residents right out of the gate.

Through it all, Pinheiro has remained laser-focused, fixated on the next task in front of her and nothing else.

“It's been very rewarding,” she said of the positive upheaval in her professional career over the past several months. “It (getting a UFC contract) has always been my focus since the day I decided to migrate to MMA, so it was a goal achieved.

“My total focus is on this fight against Randa Markos; that's my main goal,” she added, refusing to get too far ahead of herself before stepping into the Octagon for the first time. “After having a good victory against her, let's see how things will unfold and what my next steps will be.”