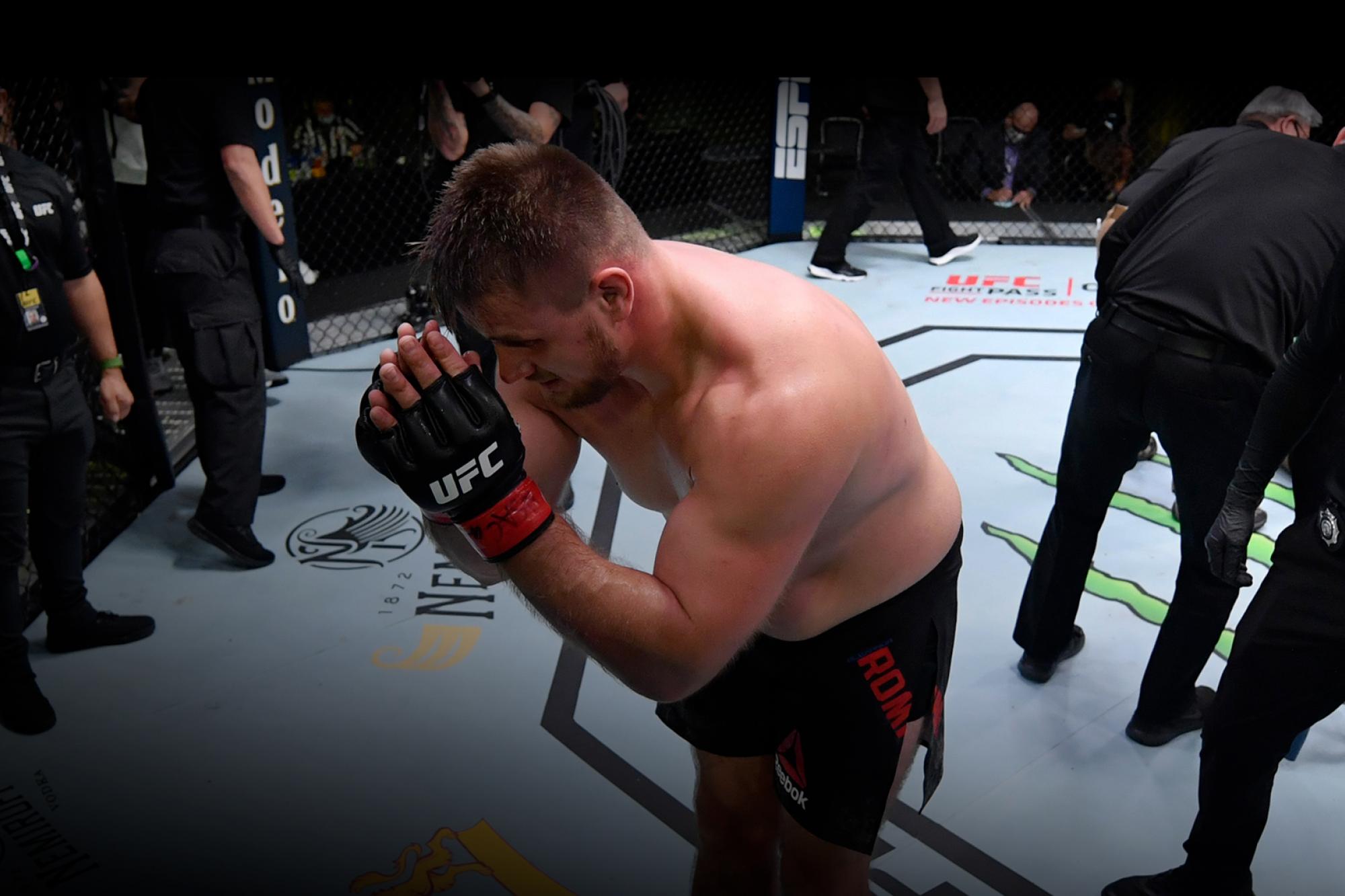 Alexandr Romanov Has Made A Name For Himself Quick, And Is Looking To Rise The Ranks Of The UFC Heavyweight Division Sooner Rather Than Later, Starting At UFC Vegas 24.
By McKenzie Pavacich, on Twitter @mpavacich_ • Apr. 16, 2021

Alexandr Romanov is a pretty laid-back kind of guy, which is the last thing many would expect from an undefeated professional fighter who towers over most of his company at 6’2” and weighing in at 264 pounds.

The Moldovan’s cool and calm demeanor, paired with his dominance inside the Octagon, creates a compelling juxtaposition we all know so well in mixed martial arts.

Entering the Octagon for his third fight in the UFC, and his third fight in seven months, Romanov has become fairly accustomed to the protocols and process of a mid-pandemic fight week. But does having this prior experience give him an advantage? 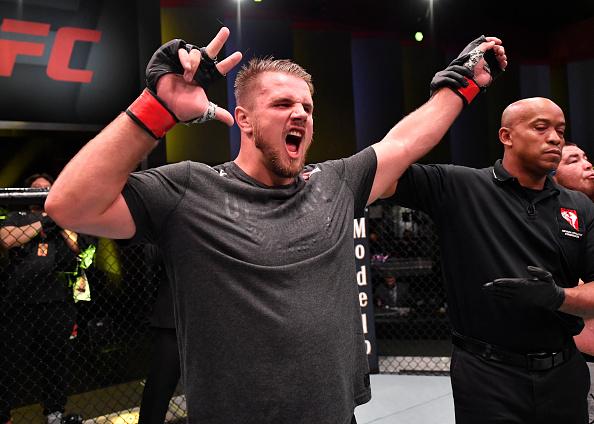 Alexandr Romanov of Moldova reacts after his submission victory against Roque Martinez of Guam in a heavyweight fight during the UFC Fight Night event at UFC APEX on September 12, 2020 in Las Vegas, Nevada. (Photo by Jeff Bottari/Zuffa LLC)

And what about extending his 13-fight win streak, one in which all his victories have come by finish? Undoubtedly, there has to be some amount of pressure that comes with that.

Despite having his UFC debut delayed three times over nearly five months due to the COVID-19 pandemic, Romanov’s confidence in his team and his ability has only increased.

“I work with just one team, so it’s perfect for me,” Romanov explains. “My striking coach I’ve known from childhood. My grappling coach I’ve worked with for five years. Every time I fight and everywhere [we go], we’re together, so it’s not as big of a problem during the pandemic.”

Originally slated to make his debut in April 2020, Romanov was pitted against the likes of Raphael Pessoa and Marcin Tybura on separate occasions, but both were cancelled due to COVID. On September 5, Romanov made it all the way to the day of the event before his bout against Marcos Rogerio de Lima was delayed yet again.

"After one year I'm ready to fight anyone from the top 5."

Alexandr Romanov reflects on his @UFC journey so far, why he feels no pressure being an undefeated fighter and more 🔊⬆️ #UFCVegas24 pic.twitter.com/vCn4QisdKO

“Every time we make a full camp, and two weeks before the fight, when a fight is cancelled, it’s very hard for us,” Romanov explained, adding that it’s more than just time that’s wasted when a fight goes awry, but travel and money, as well.

Despite the setbacks, the heavyweight made his long-awaited debut on September 12, winning by second-round submission over fellow UFC debutant Roque Martinez. He followed it up eight weeks later with a first-round technical submission over de Lima, earning himself a Performance of the Night bonus.

As the 30-year-old heads into his third UFC fight looking to extend his dominance, he said he feels, “no pressure at all. I work hard and train hard every time. I believe in myself, I believe in my team, and that’s enough for me.”

Next up for Romanov is Juan Espino, a fellow wrestler on a nine-fight win streak who matches Romanov’s record with eight of his 11 victories coming by submission. 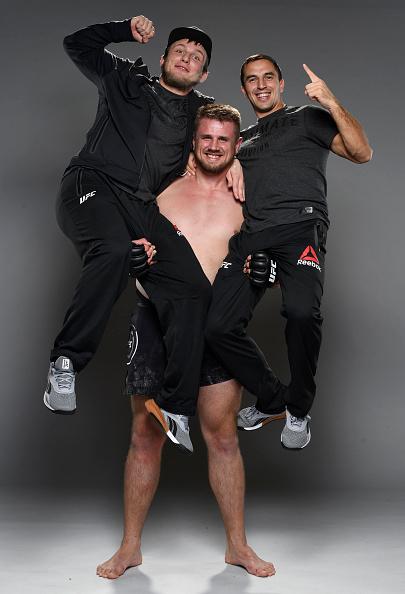 Alexandr Romanov of Moldova poses for a portrait after his victory during the UFC Fight Night event at UFC APEX on November 07, 2020 in Las Vegas, Nevada. (Photo by Mike Roach/Zuffa LLC)

It’s not a concern of Romanov’s, who is confident in his wrestling and ground game as someone whose competitive freestyle wrestling career has reached its 15th year -- and counting.

Representing Moldova on the mat on a total of four Moldovan World Teams and eight European Teams, Romanov competed as recently as February of last year in an attempt to represent his country at the Olympics.

So when it comes to fighting another wrestler inside the Octagon, Romanov isn’t really concerned.

Order UFC 261 For Any Device

“I think my wrestling is much better than [Espino],” Romanov said. “He’s just a grappler; I compete professionally in wrestling, grappling and Brazilian Jiu-Jitsu. I think my level is much better.”

It’s a sentiment that will be put to the test on Saturday as the two square off in the fight before the preliminary card finale in a quiet UFC APEX -- an environment Romanov has become accustomed to. 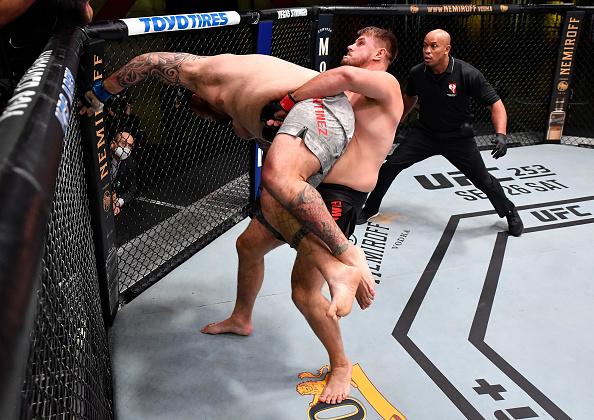 Alexandr Romanov of Moldova throws Roque Martinez of Guam to the mat in a heavyweight fight during the UFC Fight Night event at UFC APEX on September 12, 2020 in Las Vegas, Nevada. (Photo by Jeff Bottari/Zuffa LLC)

“For me it doesn’t matter if there’s fans or no fans,” Romanov said. “I fight for my team, my family, for all the fans who watch us.”

Despite the challenge that lies ahead, Romanov has his eyes set on big plans for 2021.