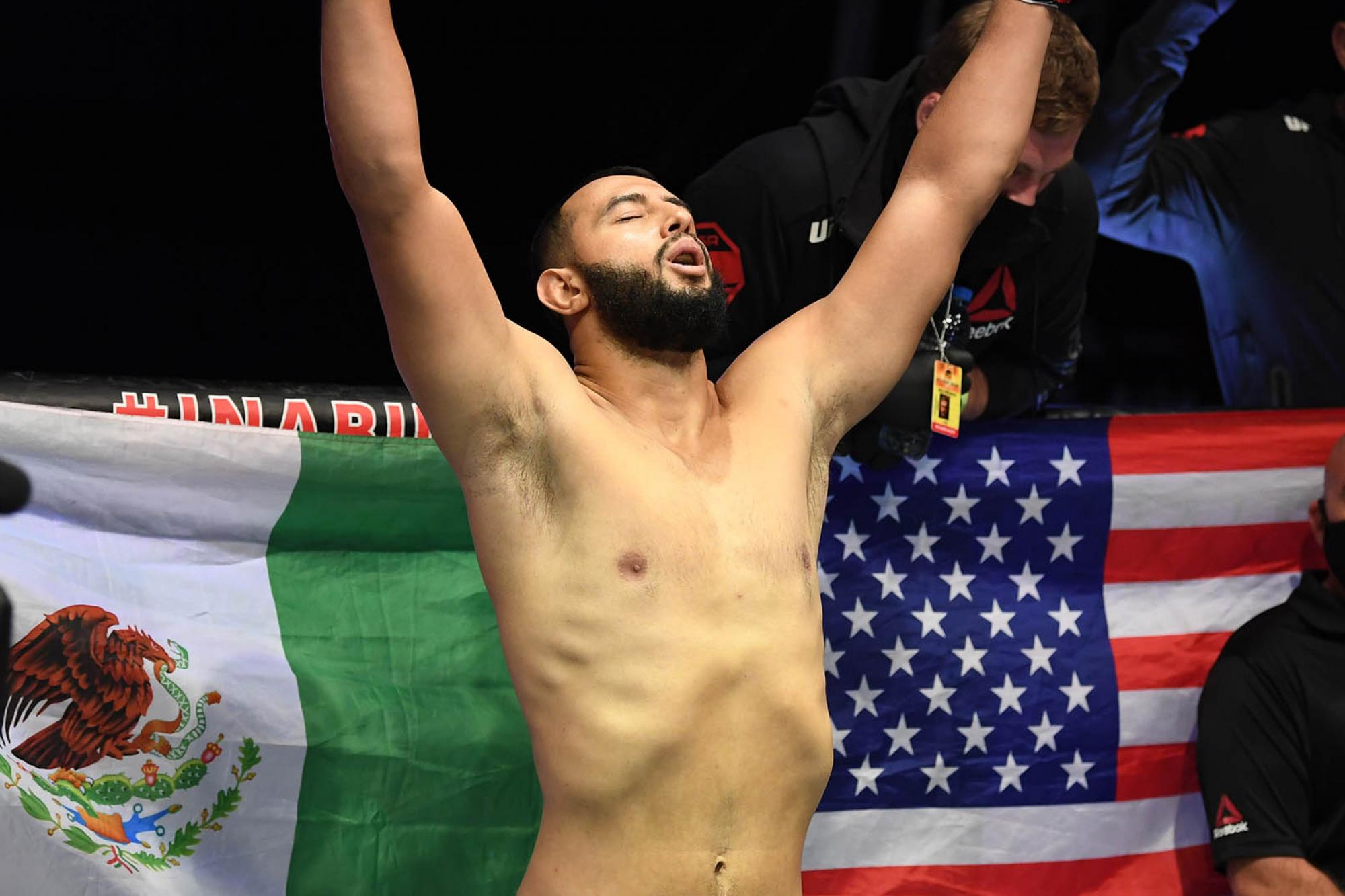 After Facing Two Losses In Less Than Eight Months, Light Heavyweight Contender Dominick Reyes Had To Shift His Thinking To Learn From His Mistakes And Move Forward
Apr. 29, 2021

Dominick Reyes chuckles when asked how he would describe 2020.

That’s a mic drop so early in an interview, but Reyes isn’t walking away. He’s more than willing to go into the details of a year in which he nearly won the UFC light heavyweight title only to be on the wrong side of a controversial decision and then go on to lose a second straight bout, this one in more emphatic fashion, by the end of 2020.

It’s admirable, because some would just throw a year like that in the dumpster and move on.

“I’m moving on,” Reyes said. “but I still gotta look at the lessons I learned from that year and grow. You'd like to forget and just move on from when things don't go great, but you still gotta examine what happened so it doesn't happen again.”

So he doesn’t just say that the judges got it wrong against Jon Jones and that it just wasn’t his night against Jan Blachowicz?

“That's eventually what I did with the Jones fight, it was just that the judges got it wrong and we're gonna move on from that,” he said. “And then the Blachowicz fight, it was a s**tty night with not only that night, but issues in my camp and issues with my training. It was a lot of things surrounding it that were addressed.”

Call it the education of Dominick Reyes, who went through quite a different journey when he was playing football at Stony Brook University. Then, if he had a bad game, he could come back a week later and get it right. In the fight game, it usually takes months to get a shot at redemption. For some fighters, having to be right on the night is what makes this so exciting.

For others, that’s the stressful part, that eight weeks of training could go down the drain if you don’t show up when the Octagon gate closes. Reyes sits somewhere in the middle, as he wanted to get back as soon as possible, but knew that he needed time to switch things up in his camp and his mindset.

Moments of zen for @DomReyes before heading into #UFCVegas25 🧘‍♂️ pic.twitter.com/iyg70nTlAB

“In my case, having to sit on it and make those changes and have the time to actually make the adjustments in my camp that were needed was important,” he said. “For me, you'd like to get it back and fight again, but there were things that needed to be addressed if you want to get into the win column. It wasn't just a bad night (against Blachowicz); it was the whole camp.”

Add in a broken nose suffered three weeks out from the fight, and Reyes was behind the eight ball before the first punches were thrown against Blachowicz last September. But the thought of pulling out of the fight never even crossed the Californian’s mind.

“It's a 'you made your bed, now you gotta lay in it' thing for me,” Reyes said. “Deep down, I knew it wasn't gonna be great, but I was like, 'All right, let's see what happens. I think I can beat this guy, even with things not being where I want them to be.' You still believe in yourself no matter what and you still go out there and fight the fight. It's still a fight and it's still a 50-50 chance that I can win this fight. You don't realize what's really going on until the results come out and you examine everything and think, it's crazy that I even fought. I went into that fight with a pretty badly broken nose before he barely touched it and destroyed it again.”

At 4:36 of the second round, Blachowicz stopped Reyes and won the vacant UFC light heavyweight title. It was a feel-good moment for a fighter who had weathered the storms of a pro fight career to finally win a world title. For Reyes, it was time to regroup and figure out how a 12-0 record turned to 12-2 in less than eight months.

Will we see @DomReyes unleash the same intensity this Saturday? #UFCVegas25 pic.twitter.com/JZmkriImUd

“I changed everything in order to try to get to the next level, but after the Jones fight, I was like, I need to do more, I need to change this and that to be better and be on the next level and be able to finish him,” Reyes said. “And I did too much. I broke myself down completely and started over again instead of continuing. I changed my entire way I fight and what makes me special and all of a sudden was trying to be a pressure, pocket fighter and that's not me.”

It’s not an easy 12 months to re-live over and over again, especially when he return in a main event this Saturday against Jiri Prochazka. But Reyes is a pro and he does it. And he owns what happened at UFC 253.

“It's not difficult,” he said. “I'm okay with what happened because it's my fault. I'm fine being accountable for it. In hindsight, I messed up and made several decisions that I shouldn't have made. The main decision being fighting a fight I didn't want to fight from the beginning. You don't fight when you don't want to fight. I was fighting just for the belt and not because I was ready to fight or wanted to fight.”

But he fought anyway, because that’s what he does. On Saturday, he’ll make the walk again, but this time, the feelings are different than they were the last time.

“It sucks when you have to dread something that you used to love, and that's what happened last fight,” Reyes said. “And this fight, I'm so excited to get back in there. I have the love for it again, I enjoy being in that danger...I'm excited about it.”

Some people have an odd way of having fun. Reyes laughs, but he doesn’t back down in admitting that there’s no place he’d rather be on Saturday than in the APEX throwing hands with Prochazka. 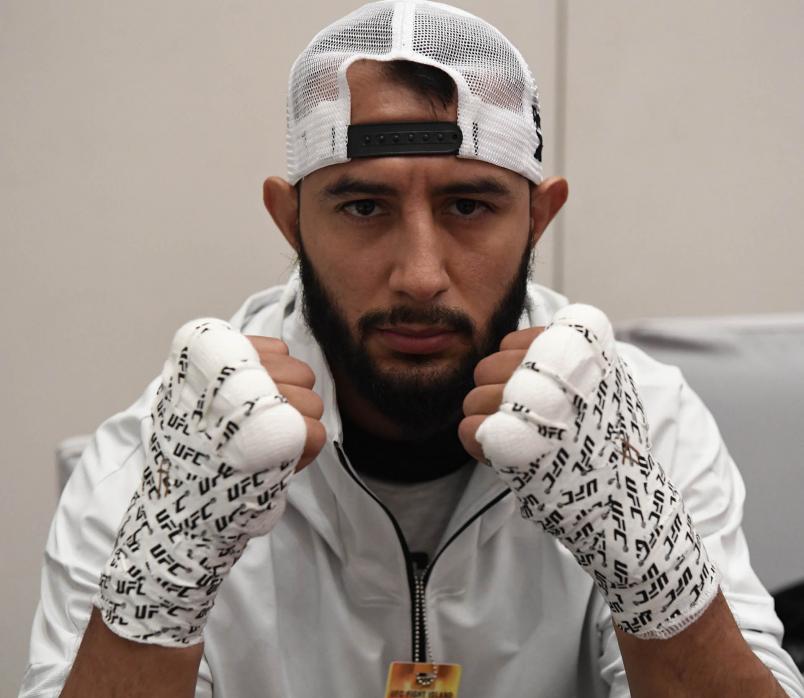 In glimpses, you can hear the enthusiasm in Reyes’ voice again and that’s a good sign. As for the rest of what comes along with another UFC main event, one that could determine his place in the title race at 205 pounds, he’s not concerned with anything but his performance. Not wins, not losses, not his position in the rankings. Dominick Reyes wants to be Dominick Reyes again.

“All I'm focused on now is my performance and just having fun and enjoying myself out there,” he said. “And that's when I perform my best, when I'm having fun and focused on the performance. The results will take care of themselves. That's not a concern of mine anymore.

"All I want is to be the best version of myself I can possibly be, maximize my potential, give the respect to the Lord who made me and gave me everything I have so I can maximize it. Obviously, it's a platform where I can help people too, and that's it. I just want to be the best version of myself and be real. I want to go out there, fight my heart out, perform at my best abilities, win or lose, and if I go out there and perform, I did my thing.”