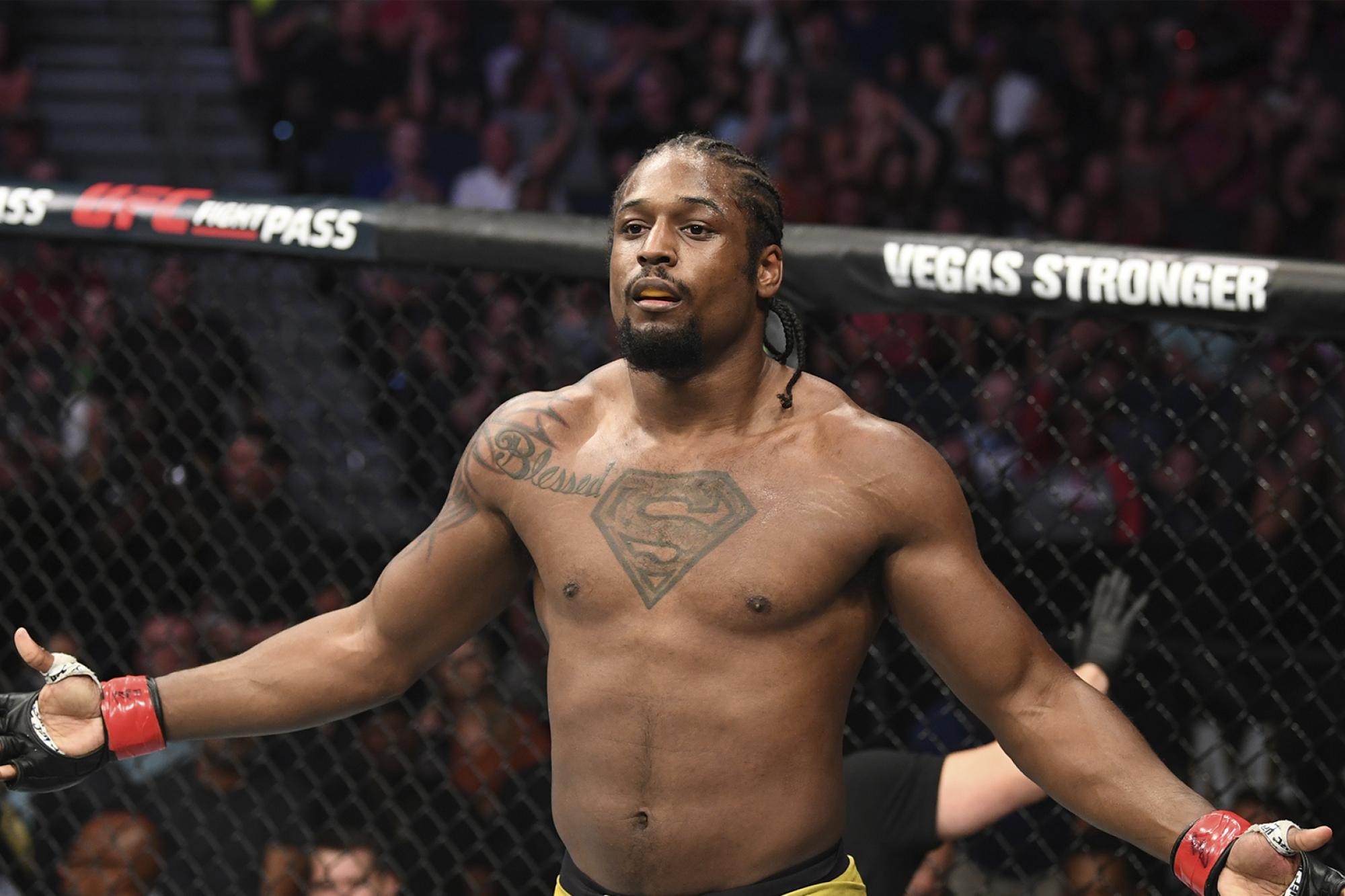 When Ryan Spann Competes In His First UFC Main Event This Weekend, He's Going To Be Fighting So Something Much More Important Than Rankings.
By Gavin Porter, On Twitter: @PorterUFCNews • Sep. 13, 2021

The Ryan Spann that UFC fans have come to know over the last three years is long gone.

The version of “Superman” that rocketed to 5-1 in the UFC felt like he needed to make some adjustments after his first-round knockout win over Misha Cirkunov, feeling like he was focusing too much on things from his past and looking too far ahead rather than living in the moment.

That’s when Spann reached out to the UFC to see if they had any resources that could give him an outlet. Spann felt an immediate difference once he started speaking to a therapist and organizing his thoughts in a way that helped him connect some of the dots.

“I feel like a new person, from even like June. I was sitting there looking in the mirror and I realized I didn’t recognize me – I could watch fights or google myself and I could kind of remember it, but they didn’t really feel like my memories,” Spann told UFC.com. “I haven’t been present because my mind would live in the future or the past. We have been working a lot on keeping me present. It’s why I’m feeling so good.”

From enjoying time at training and spending time with his family, to getting close to signing a contract for a new home in Dallas, Spann is thriving in the present. He even allowed himself to let loose a bit early in the summer when he took his wife, his brother and his brother’s wife on a vacation.

“When I was on vacation it kind of hit me that moments like this is what I’ve been working for. I bought my wife a new ring while we were on vacation and being in that moment and not thinking about anything other than that moment makes me a little emotional,” Spann said. “I’ve been working my whole life so my family doesn’t have to live the life I lived growing up. That’s why I can’t let anyone take this from me.”

Spann doesn’t think that he would have had such a profound moment and enjoyed his vacation as much if not for his refreshed mindset that he’s found since starting therapy. For the first time in a long time, Spann feels like his mental game is on par with the physical tools at his disposal.

Another reason Spann is feeling good is that he’s slated to compete in his first UFC main event on September 18 against Anthony Smith. Seeing his face and last name on that UFC Fight Night: Smith vs Spann poster is a crazy feeling, but it also is a feeling that ignites Spann’s burning desire to provide for his family.

Preview Every Fight On UFC Fight Night: Smith vs Spann

“It’s a weird feeling. It’s more of a ‘I’m close’ feeling now that I can see the goal. Before, everyone would tell me what I was capable of, and I didn’t necessarily see it. But now, I can smell it, taste, and feel it,” Spann said. “I’m fighting for my family. I’m fighting for my wife and my children. I just turned 30 years old and there’s no way Anthony Smith is going to be able to prevent me from doing what I need to do.”

Smith has made a few comments about Spann in the lead-up for their top 15 showdown, nothing serious, but they caught Spann’s attention, nonetheless. Spann has seen Smith compete against some of the best middleweights and light heavyweights in the UFC and he admits that “Lionheart” is “great at his craft,” but there is only one outcome that will happen when the two collide this Saturday. 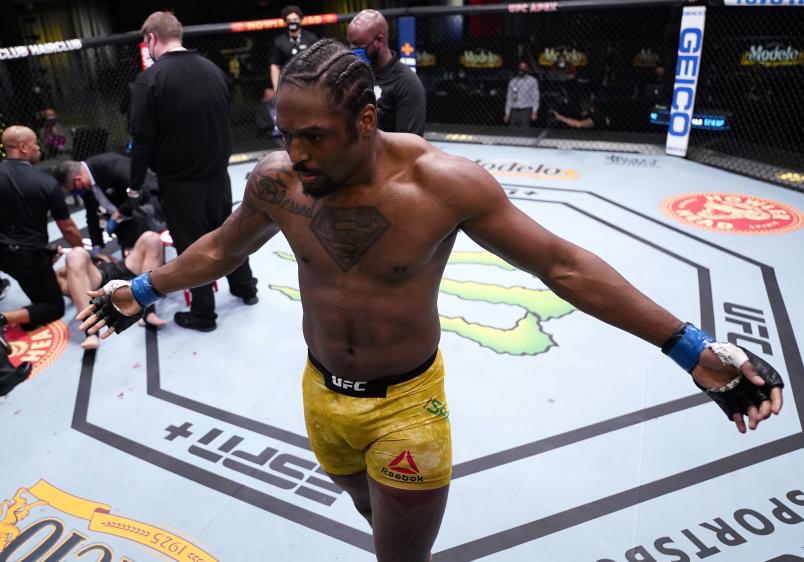 Ryan Spann reacts after his knockout victory over Misha Cirkunov of Latvia in a light heavyweight fight during the UFC Fight Night event at UFC APEX on March 13, 2021 in Las Vegas, Nevada. (Photo by Jeff Bottari/Zuffa LLC)

“The truth is, he can say whatever he wants to say. There is no real pressure when it comes to fighting because truth be told, I’m pretty sure I’m the underdog betting wise, which means they are expecting me to lose. That means Anthony can take all his experience and all his main events and that’s pressure on him. If he can perform like that, then he performs like that, but if he can’t… he can’t,” Spann said. “The result will be the same. He’ll be laying on his back looking up at me. I’m fighting for something much stronger and much different than he could come up with it. It won’t matter. I’m too close to changing my family’s lives to let Anthony Smith get in my way.”

Spann reflects on what he said for a moment before adding why he doesn’t mind being the underdog.

“No one can fight for him or fight for me. He’s going to have to beat me,” Spann said. “I don’t care what people think one bit.”

RELATED: Tafon Nchukwi Has No Doubts | Dakota Bush Feels Sharper Than Ever

One thing that Spann focused on during his preparation for this fight was his nutrition. Spann wasn’t in love with the fact that he’s been one of the last athletes to weigh in his last couple times out. He didn’t take that aspect of the game serious enough and corrected that by hiring a nutritionist to work with him for the final month before he hit the scale.

“I used to roll off the couch and just starch people. But the stakes are too high for me to look at this game that way now,” Spann said. “With the way my mind and my body are feeling right now, I don’t see this fight going 25 minutes. If it does, I’ll be ready, but my team got me ready, and we left no stone unturned. I’m going to look completely different out there.”

Despite the improvements to his mind and body, Spann feels like he’s nowhere close to being in his prime. It took him just six fights to headline a UFC event, but Spann is confident that this one is just the first of many.

“I’m not even close to my prime right now. We’re still making leaps,” Spann said. “As I get closer to my goal I’m only going to work harder and do everything I can to win for my family. I’m driven to be the best for them. That’s what I’m going to keep working for, and this main event is where it all will truly start to pay off.”