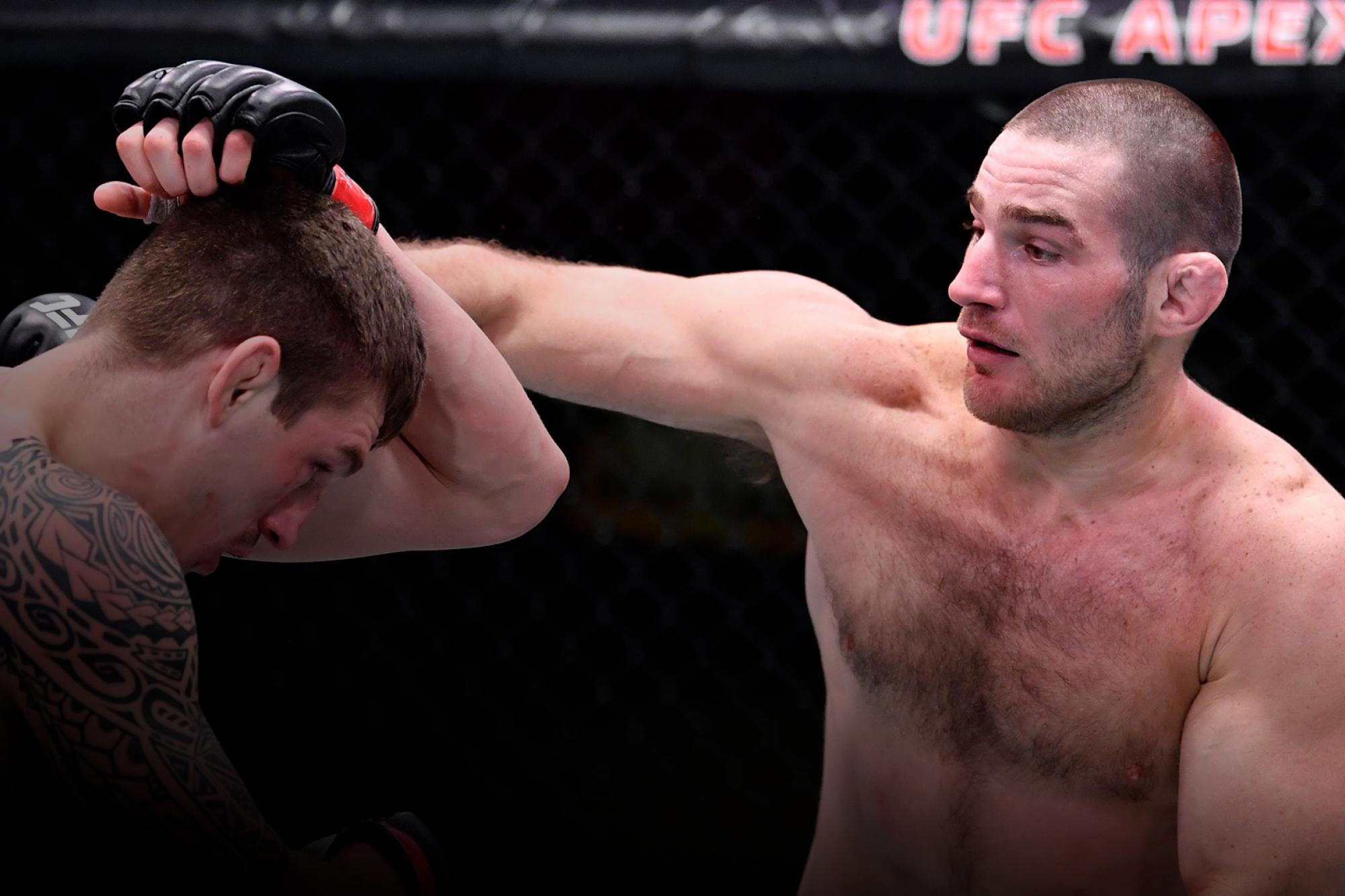 Sean Strickland Is All About This Life

Sean Strickland loves fighting. That much is clear.

It’s a part of his identity he’s held since his teen years, but as he fought his way up the ranks, he lost his way.

Enter a motorcycle accident that kept him out of action for nearly two years, and oddly enough, through that, Strickland found his way back to the MMA community in October 2020 with a new lease on his career and a new attitude that led him to a pair of victories that extended his winning streak to three and have him in the Top 15 at 185 pounds heading into his Saturday bout against Krzysztof Jotko.

“After my accident, it kind of helped me letting it go,” he said. “I’ve been fighting since I was about 14, 15, so my entire life, my identity was being a fighter, and a lot of times, I fought the fear of failure, not being a fighter, and it really held me back. So going through that (the accident), taking a look at myself and saying, ‘All right, Sean. Guess what? You’re not a fighter. Time to move on,’ it impacted my performance because I’m not so afraid of failure these days. I could just go out and enjoy it, and when I fight, it feels a lot more like when I was an amateur. It’s a lot more fun, but the first early half of my UFC career, I hated fighting. I was so nervous, but now it’s just more enjoyable.” 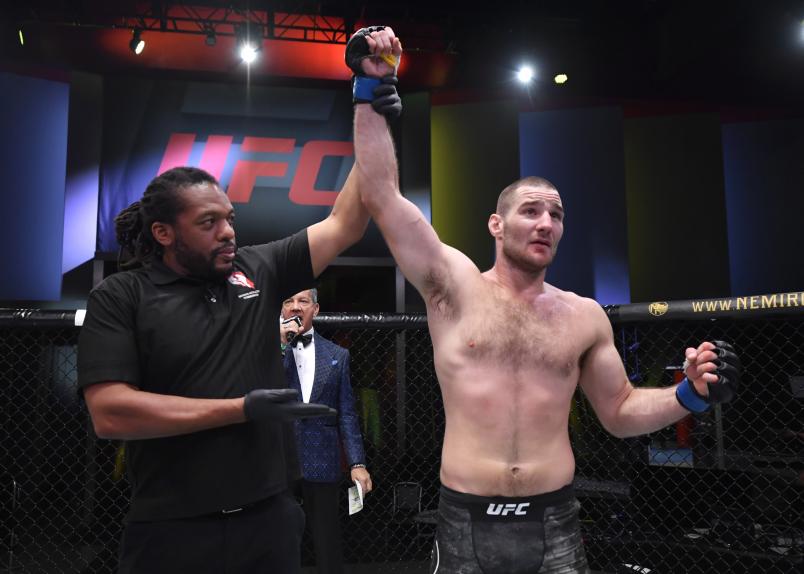 Sean Strickland reacts after his TKO victory over Brendan Allen in a 195-pound catchweight fight during the UFC Fight Night event at UFC APEX on November 14, 2020 in Las Vegas, Nevada. (Photo by Jeff Bottari/Zuffa LLC)

Upon his return, Strickland parlayed an entertaining (and talkative) performance against Jack Marshman with a short-notice, knockout win of the up-and-coming Brendan Allen just a couple of weeks later.

Yet despite having several reasons to feel proud of his recent work, Strickland gives off the of-the-moment vibe that matches the liberation from the weight of potentially losing.

The person throwing the strikes which Strickland will try to avoid is Jotko, who, like Strickland, is coming off a trio of wins. Candidly, he said he doesn’t really care about forming a strategy to fight the Polish fighter. He just wants to knock him out and move onto the next person in his way. 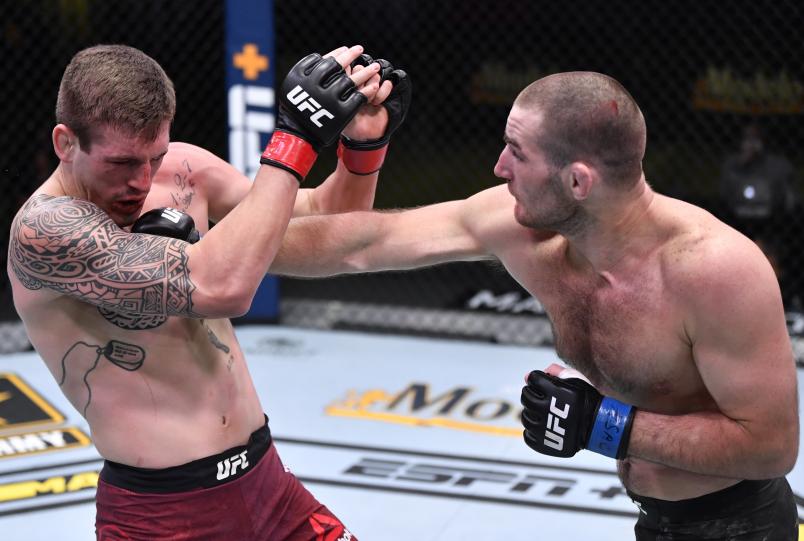 “If they ask me my game plan, (I have) no game plan,” Strickland said. “Shut the cage, you either knock me out or I’m going to knock you out. That’s it, or, most likely, you’re going to try to f**king take me down and cuddle me.”

Game plans (or not) aside, Strickland puts the work in to make sure he can make good on those violent wishes, and a person who has helped him along the way is soon-to-be middleweight title challenger Marvin Vettori.

The two met when Strickland visited Kings MMA in Southern California, but they didn’t exactly hit it off right away.

While they weren’t exactly two peas in a pod, they eventually earned each other’s respect and regularly spar against one another.

Naturally, given Strickland’s penchant for chatter and Vettori’s aggressive demeanor, the two clash more than some would say is normal or healthy for training partners. But, what’s undeniable is that the dynamic works for them, and looking at their respective results, it’s hard to deny the method to the madness.

“When Marvin trains, he does it with purpose,” he said. “When he’s in the gym, he does it with purpose. He doesn’t just show up, and I see that, and I was like, ‘Man, I need you. I don’t know who the f*** you are, but I need you in my camp. I need to train with you,’ and then he just turned out to be this savage. We’ve had some falling outs, me and Marvin. We’ve had fist fights in the UFC gym, people pulled us back. I’ve bled, he’s bled, but he’s a good buddy of mine, and he’s actually involved with me in this camp. I’m pretty happy to have him in my camp. When you’re sparring a guy like Marvin Vettori, a lot of people don’t seem that tough.

“We’re so competitive to where when we’re sparring, it’s not like, ‘Oh, we’re friends. We’re going to get better,’” Strickland continued. “It’s like, ‘We’re going to see who is better,’ but that’s why I spar Marvin because he does it with passion. He’s an amazing fighter, and he’s one of the hardest working guys in the sport, and he deserves the title, and after this fight I told him I’m going to go back to Cali and help him as much as I can.”

First, though, Strickland has business to take care of against Jotko. A few more wins in the constantly shifting middleweight division could have him climbing the rankings faster than perhaps some thought was possible before he made his return against Marshman. Strickland also mentioned that fighting Vettori, especially if the Italian captures the title, would be an “honor” rather than a deterrent because he holds such respect for him.

More than anything, though, Strickland is just happy to be days from stepping back into the Octagon and throwing hands against someone. It’s that matter-of-factness about the fight game that sheds light on exactly how much Strickland enjoys the violence of it all. His actions will do the same when he steps onto the canvas, and once the ending comes, he’ll just go right back to minding his business until the next chance comes.

“I just want to get on to the next one and hit someone in the face,” Strickland said. “I don’t look in the mirror and say, ‘Oh there you go, you knocked a guy out.’ The moment I leave this event, it just f***ing another day for me.”