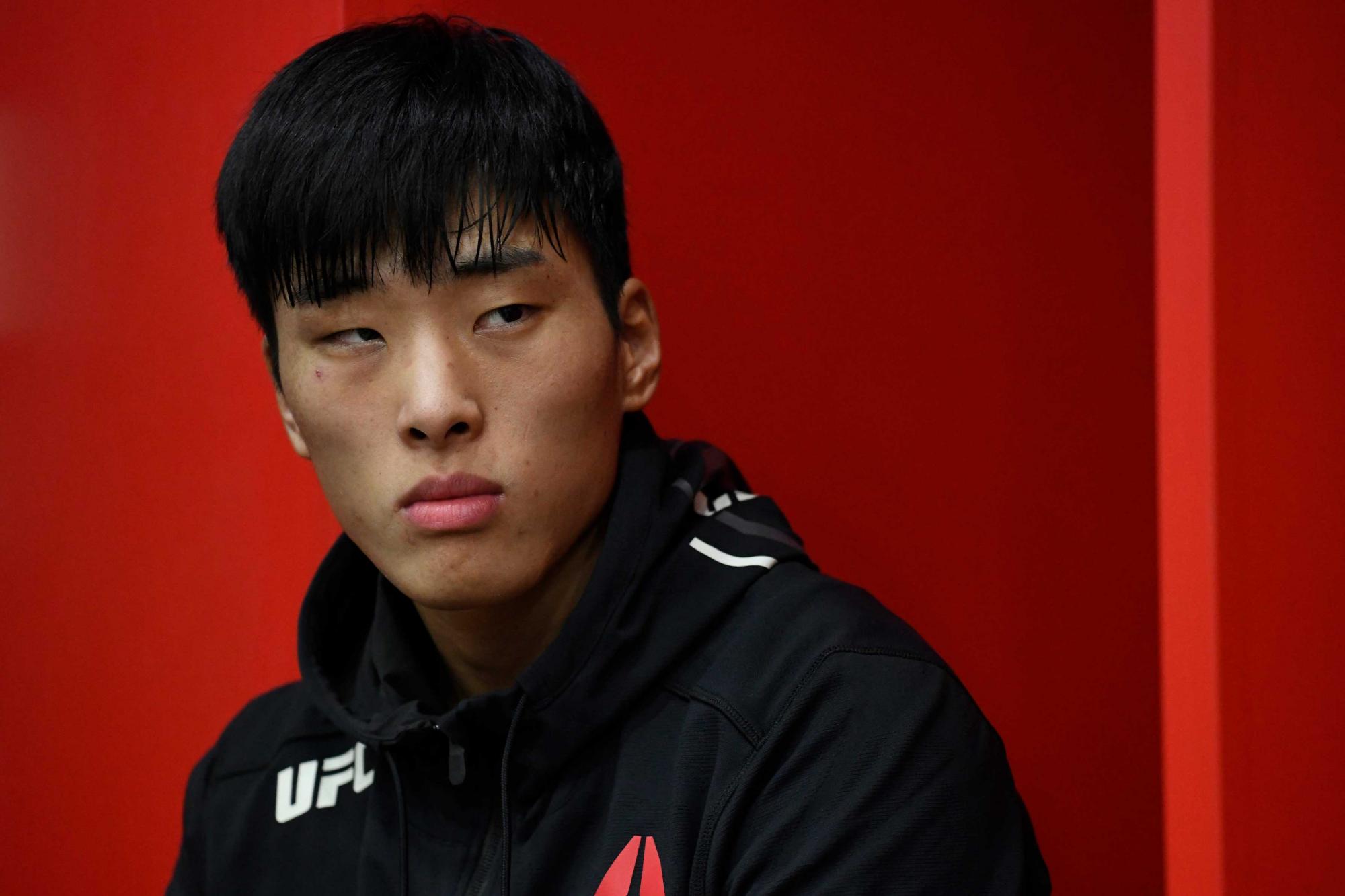 SeungWoo Choi: From Daydreams To Destiny

South Korean Featherweight Grew Up Dreaming Of The Big Show...And Made It Happen
By Steve Latrell, on Twitter: @TheUFSteve • Jun. 17, 2021

At age 28, SeungWoo Choi is young enough to have grown up watching the UFC regularly on television. He did precisely that and it lit a fire in his imagination and put him on a path to his own destiny.

“I started MMA in hopes of fighting in the UFC one day,” the South Korean explains via interpreter. “When I was still fighting in Muay Thai, me and my family would often sit down to watch the UFC and slowly it made me want to transition to MMA and give it a shot. So I retired from Muay Thai, went to serve my mandatory Korean military requirements, and as soon as it ended, I went straight to find an MMA academy nearby to start my dream of making it to the UFC one day.”

Don't Miss Any Of Saturday's Action On ESPN+

There’s a special kind of satisfaction that comes from visualizing your dream and then attaining it, particularly one on such a global scale. He took notes from those who preceded him. 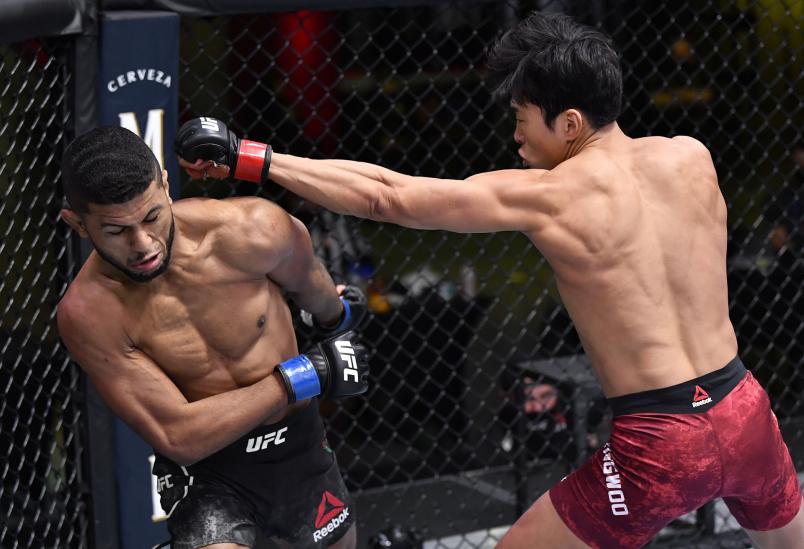 “During my early days in MMA, I admired Conor McGregor a lot. He had such confidence in him and every word he said was backed inside the Octagon. He proved himself each and every time. Also, he was the fighter that best knew how to market and promote himself fight-wise and fashion-wise with his huge fan base.”

Some fighters never watch the sport outside of their own bouts. But Choi remains as big a fan of his peers, despite now being their co-workers.

MORE UFC FIGHT NIGHT: Fight By Fight Preview | Fighters On The Rise | Aleksei Oleinik Still Has Gas In The Tank | Matthew Semelsberger Wants To Prove Everyone Wrong | The Rise Of The Korean Zombie | Consistency and Purpose Are Matt Brown’s Focus

“My Top 3 favorite fighters are Max Holloway, Dustin Poirier and The Korean Zombie. They are a special few that show great improvements in each fight and fight their hearts out each time they are inside the Octagon. I like the quote ‘slowly, but surely,’ and that quote fits them perfectly.”

That quote might apply to Choi himself. Stumbling out of the gates in his first two UFC bouts in 2019, he tasted his first Octagon victory in the sweetest way possible: in front of an adoring home crowd in South Korea in December 2019. Pandemic travel restrictions would keep him from getting fights for all of 2020, but he made the most of his next opportunity this past February, scoring a unanimous decision over hot rookie Youssef Zalal.

Seungwoo Choi poses for a portrait during a UFC photo session on June 16, 2021 in Las Vegas, Nevada. (Photo by Mike Roach/Zuffa LLC)

“It took me a over year to finally get back to the Octagon to fight Zalal, so by the time I got back inside the Octagon, all I could remember was, "Finally, I’m back inside here, feeling focused and ready to win the fight in a spectacular fashion.”

In the fan-free UFC APEX, it was the polar opposite of the capacity crowds of Busan. But it made little difference to “Sting.”

Pre-Order UFC 264: Poirier vs McGregor 3 For Any Device

“The sound surrounding the venue and Octagon were obviously the biggest contrasts, but my focus was to go in there and win, and my personal emotions were no different. To have the fans would boost my energy and the presence of fans would be great, but with or without them, how I feel and the urge to win would not be changed. It was better for me since I could hear my corner’s advice much better and move according to plan.”

He’ll get to hear that advice again as he returns to the UFC APEX, this time to face Julian Erosa on the main card of UFC Fight Night: The Korean Zombie vs. Ige. 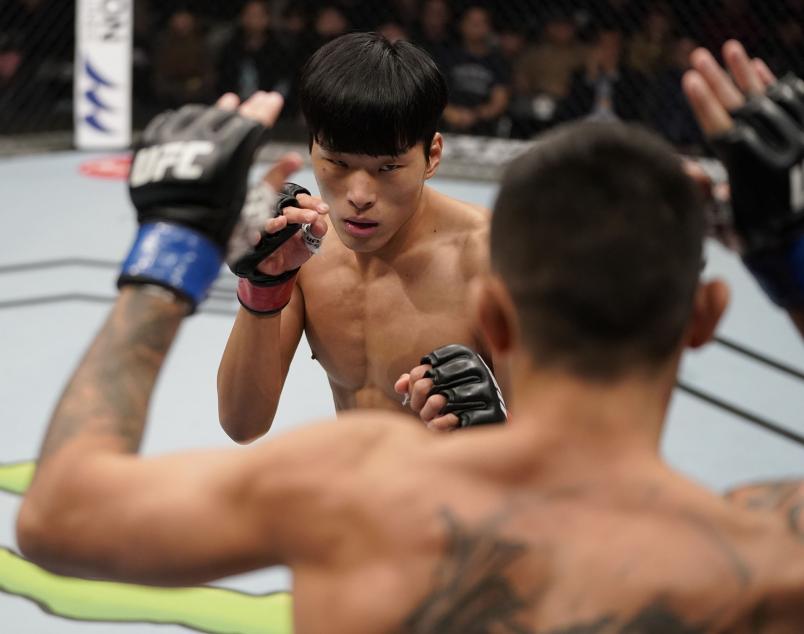 “Erosa has similar physical advantages as me with good cardio that can keep the same pace and volume the first round of the fight. I see the fight being finished easily or a fight where we’d need to empty both of our tanks inside the Octagon. So both ways I’m prepared and to finish my opponent at any moment.”

Eager to resume the pace of previous years, the featherweight has big dreams he’d like to fulfill, and a win on Saturday would be the first steppingstone.

“I’d want to make a run to be ranked in the Top 15 and, of course, my final goal is to be the next UFC champion, but I’ll take my time slowly to evolve and win all of my upcoming fights. If I could have a say for my next opponent, I’d love to fight Giga Chikadze. I’ve watched his fights closely and had the urge to fight him one day. As a similar striking-based fighter, I know I can put on a performance against him. I will make sure I get myself to the point we will have to fight one day.”

Those are big words, but we’ve already witnessed what can happen when Choi puts his mind to a dream.