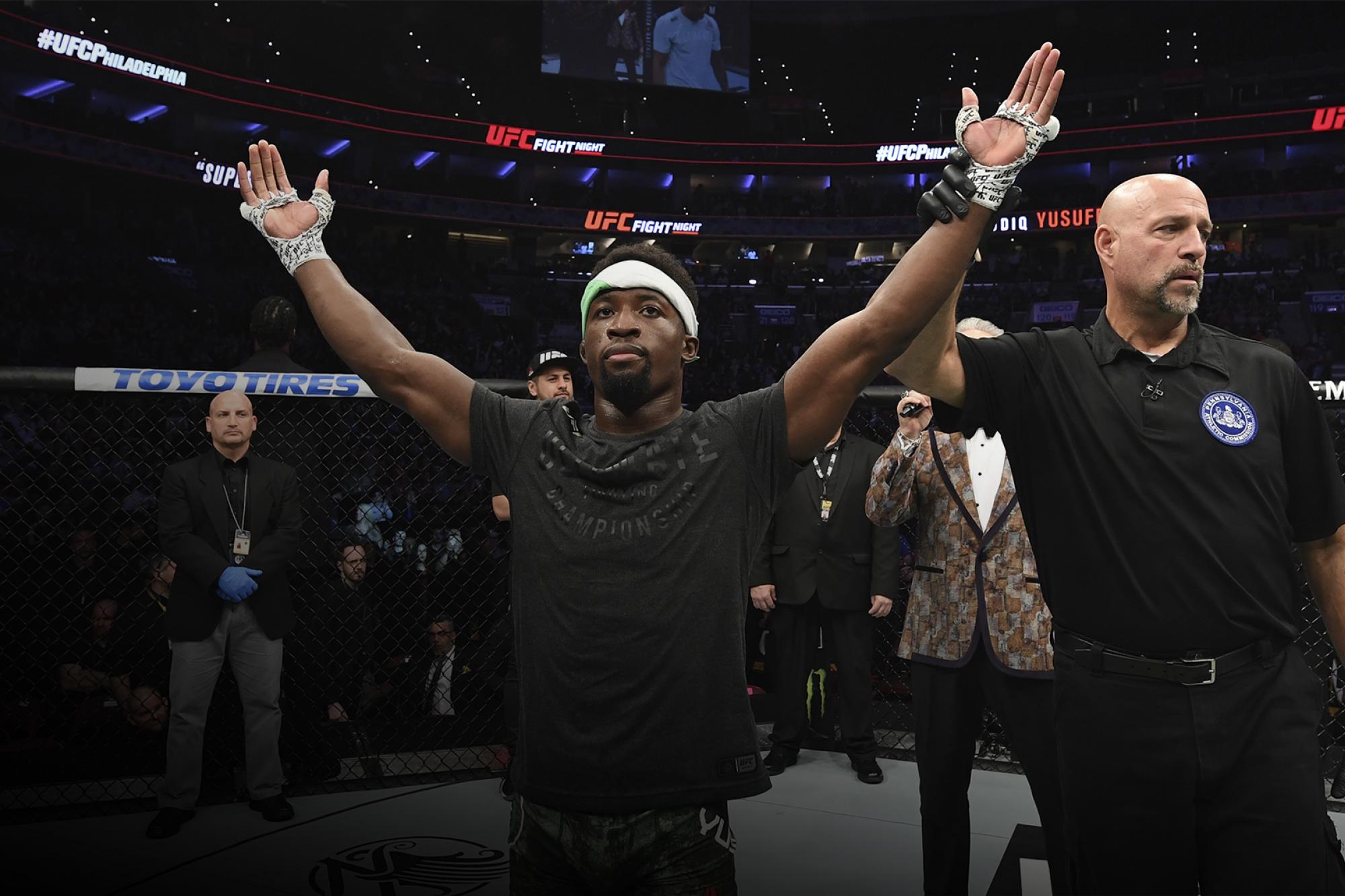 “Do you want to look at my phone?”

The normally stoic Sodiq Yusuff breaks from his calm demeanor when talking about food, a topic normally avoided when a fighter is cutting weight. Yusuff, however, routinely surrounds himself with it – he watches the Food Network, stares at food on Instagram, etc. – to give himself a light at the end of the tunnel. When he shows me his phone, he scrolls through dozens of pictures of pure gluttony.

“It’s strangely calming,” he told UFC.com. “I don’t know how to explain it. It’s a little bit psychotic. That’s all I do most of fight week.”

It’s a formula that hasn’t failed the featherweight prospect yet, and so there’s no reason to switch things up as he approaches the biggest fight of his career. After passing his first two tests in the Octagon, Yusuff is set to square off against Gabriel Benitez on the main card of UFC 241. The bout comes right before the highly anticipated trio of fights that close out the night, and the opportunity isn’t lost on Yusuff.

“You can’t ignore that,” he said. “There’s a reason why we’re here. I know they see something in me. That’s why they put us right before the big three (fights), so I’m going to try take as much advantage of it as I can.”

The hype building around Yusuff has as much to do with his talents as it does his overall aura. A sense of assurance radiates off him and flows through his approach to fighting. When it comes time for the fight to start, Yusuff is so locked in that he says he hasn’t remembered Bruce Buffer announcing his name.

That stillness is something he says comes naturally and also helps in his chosen career path.

“Ever since I was younger, I got made fun of for my stoicism,” Yusuff said. “Especially in training, I try to keep a good poker face, and it ends up transitioning well to competition because that way, you don’t want your opponents to tell when the plan is not going as well as it should.”

If Yusuff had any adversity as a fighter, it hasn’t come up inside the UFC Octagon, where he picked up a first-round finish in his debut against Suman Mokhtarian in December 2018 and a unanimous decision over Sheymon Moraes in Philadelphia in early 2019 after earning a contract on the second season of the Contender Series.

Following his win over Moraes, Yusuff said he realized he should have turned his aggression up a little earlier than he did in the fight and hopes he can act on that lesson against Benitez. Yusuff said he expects Benitez to stand in the center of the Octagon and trade strikes with him and is hoping for a “firefight” that could steal a show stacked with exciting fights.

While he cites the size of the crowd as the only thing that took some getting used to when he first started fighting in the promotion, nothing else has really surprised him.

“It’s exactly how I thought it would be,” Yusuff said. “When I told people I was going to be here, it wasn’t like a far-fetched dream. Everything I thought about is what I can accomplish while I’m here, which is now the journey.”

That journey seems to have him on the cusp of the line separating promising prospects and potential contenders in the division. Although Yusuff isn’t one who needs validation in terms of his own abilities, more than anything, he hopes to send a message to those in charge of getting him fights.

“When I get a big win on Saturday, it’s just to let the company know to put stock in me,” he said. “I could care less what the other fighters think about me. The way I fight is just naturally going to attract fans, so I’ve never had a problem with that, so it’s just about the company. The company, they see something if they put me on the spot that they did for this fight. It’s just I want to confirm whatever they think, like, ‘Hey, he’s worth it.’”

Not that he needs any more motivation to put on a good performance, but Yusuff joked about a place he wanted to eat after his fight that closes at 9 p.m., so an early finish might be all that much sweeter. Seems like a good enough reason to get the job done early.