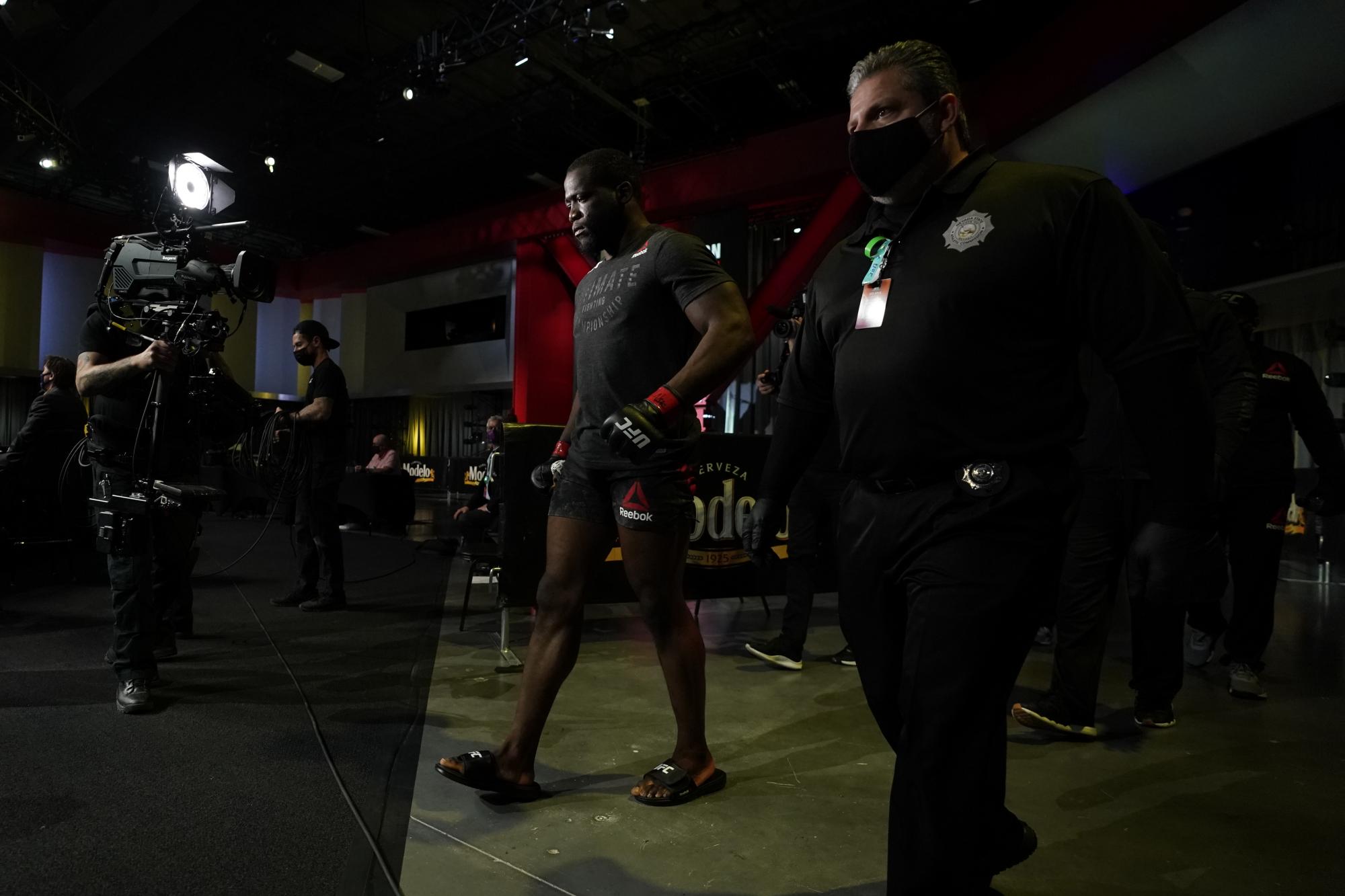 UFC Middleweight Tafon Nchukwi Plans To Out Work The Competition And Continue His Rise At UFC Fight Night: Rodriguez Vs. Waterson
By Thomas Gerbasi, on Twitter: @TGerbasi • May. 5, 2021

I suppose that if you’re a prizefighter and the odds are that you’re going to get knocked out, having Tafon Nchukwi do the deed is probably your best-case scenario.

There’s no drama, no mean mugging, no bad blood. When “Da Don” signs on the dotted line, it’s simply business – nothing more, nothing less.

Don’t mistake that affable personality for weakness, though, as the middleweight prospect hasn’t shown too many – if any – weaknesses since turning pro in 2019.

Watch With Your ESPN+ Subscription

Yes, 2019. In slightly over two years, the Bamenda, Cameroon native has not only compiled a perfect 5-0 pro MMA record, but he’s earned his way onto the UFC roster and is seen as one of the top up and comers in the sport. And though he’s heard the talk of him being “the next big thing,” he’s not letting that get to his head.

“It's not like I've been trying to avoid it,” Nchukwi said. “But the only time I get information like that is when people come up to me and tell me, so whenever I hear it, I'm like, 'Oh man, this is awesome, this is where I've been trying to get to.' To hear people talk about me, it's an awesome feeling. But I'm still far away from where I want to be, so I don't let any of that get to me.”

"I'm looking to show the people a little more violence."@TafonDaDon has only one goal in mind for his upcoming #UFCVegas26 bout with Park Junyong 🔊⬆️ pic.twitter.com/93rD9a3P4H

He may be far away, but he’s moving pretty fast to get to where he wants to go. A winner on season four of Dana White’s Contender Series last September, Nchukwi earned his UFC contract with a highlight reel knockout of Al Matavao, a victory that followed a 2:30 TKO of William Knight, and three months later, he was debuting in the big show with a three-round unanimous decision over Jamie Pickett. It was Nchukwi’s first fight to go the distance, but he didn’t miss a beat while picking up valuable experience.

“It was a very important learning experience for me because going the distance gives me more time in the ring, and I get to watch myself now, and I learned a lot from that fight,” said Nchukwu, who now makes his home in Maryland. “It's a very important thing to have a little bit more experience and time in there, because I can see a lot of things I can do better, and I'll keep improving on what I need to.”

RELATED: Fighters On The Rise | Fight By Fight Preview

What he’s improved on over the last four-plus months will be on display when he faces South Korea’s Park Junyong this Saturday in Las Vegas. Park, who has won his last two UFC bouts after debuting with a loss in 2019, has the edge in experience, both in the Octagon and overall, over Nchukwi, and though “Da Don” is cool as a nickname, it can’t compare to “The Iron Turtle” one owned by Park. Bet Nchukwi never thought he’d be fighting someone with that moniker.

“That one definitely was not in the dream,” he laughs. “But, hey, I'm with it. It's happening.”

It is, and it’s going to be in the same place where Nchukwi won his last two fights, the UFC APEX. It’s not exactly a home game, but it is a familiar setting for the 30-year-old that he should be able to use to his advantage, even if a look at the UFC 261 card in Jacksonville the night before our chat has him ready, willing and able to get into a fistfight with a crowd cheering him on.

“That was a big amp up watching the fights last night,” he said of the April 24th event headlined by Kamaru Usman’s knockout of Jorge Masvidal. “I still haven't had a fight in the UFC with a crowd yet, so that just made me look forward to everything opening back up and all the new events to come through. So hopefully after this one I'm gonna have one with a crowd and get to feel that energy.”

There’s a line on every UFC fighter’s official bio form that asks for their style. Usually, the responses come back with MMA fighter, freestyle fighter, Jiu-Jitsu fighter, etc. On Tafon Nchukwi’s bio, the answer was: hard work.

That was a first, but it’s something that Nchukwi embraces, even more than his fight-altering power or athleticism. It’s what makes him who he is.

“I guess it would just come from how I grew up,” he said of the origin of his work ethic. “My parents always worked hard, so it was only natural for me to take that upon myself as well once I got to the real world. It was something that came natural to me. If you want something, you gotta work hard for it, and that's basically been my mindset for as long as I can remember. Hard work has always been the answer for me.”

Add talent to the mix and that makes Nchukwi one dangerous man on fight night. Throw in some experience, and he has championship potential. But perhaps the second most important ingredient is his ability to observe and learn from those who came before him. He knows that there have been many knockout artists or flashy finishers who were moved too fast or who read their press clippings before getting clipped themselves. He is determined to not go down that road of too much too soon.

“I’ve watched people's stories and seen how they've taken their opportunities for granted or their talent for granted and I saw where they end up not so well, so I'm someone who learns from sitting back and watching, and then I also follow suit and try to do my best to get what I can. So after seeing so many examples around me, I know what I need to do, and that's work hard.”

And listen. And watch. 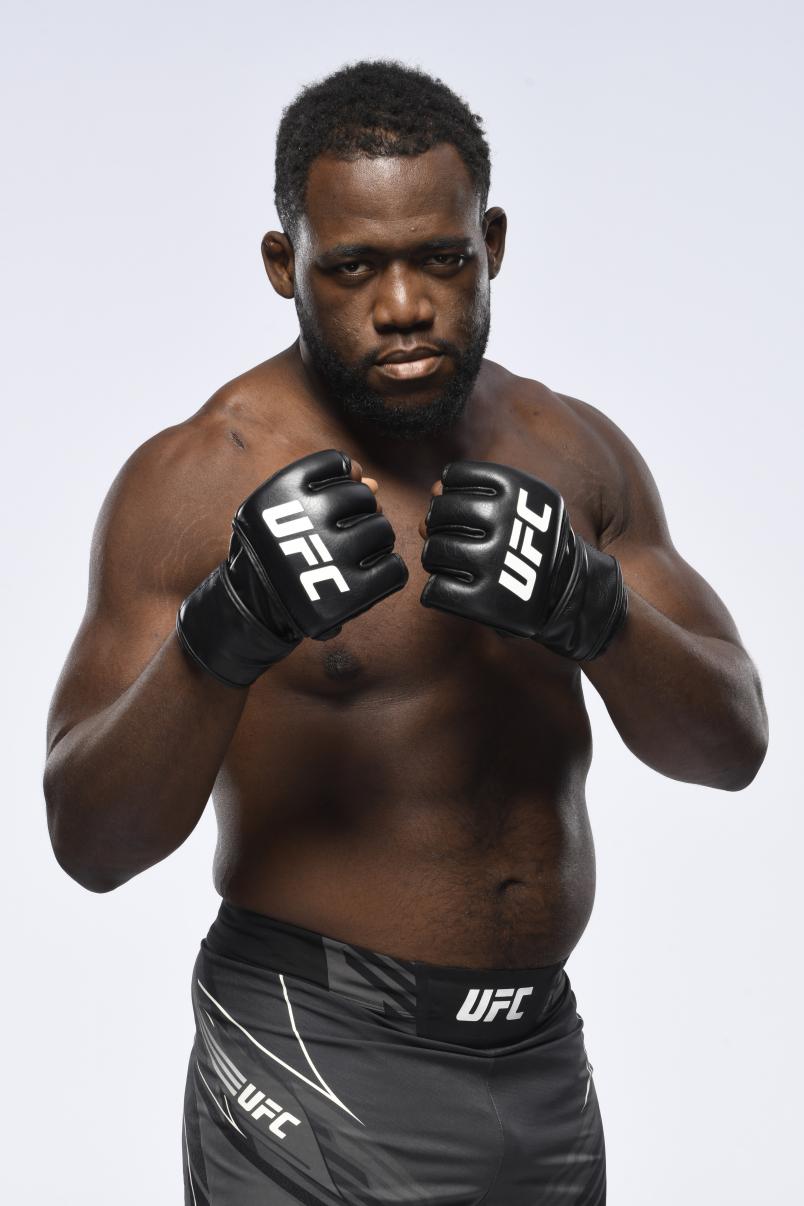 Tafon Nchukwi poses for a portrait during a UFC photo session on May 5, 2021 in Las Vegas, Nevada. (Photo by Mike Roach/Zuffa LLC).

“I stay patient because I have a lot of people around me that humble me,” Nchukwi laughs. “I have people who have already been ahead of me, people who know the path and they tell me. And like I said, I'm someone who sits back, and I watch and I listen. Being patient is what got me here, and I'm definitely gonna continue to be patient and take my time with it. You can rush it, you can go your way sometimes, but most of the time it's not really gonna go your way. I keep my head down and do what I need to do and follow the people who have been there before me.”

Tafon Nchukwi appears to have all the tools – mentally and physically - to make his way to the top of a sport where only a few can make that claim. But he’s also human, so when UFC President Dana White said that the promotion was looking at a possible event in Africa in 2022, the eager kid came out of Nchukwi. All of a sudden, that patience went right out the window.

“I'm definitely looking forward to get onto that,” he beamed. “Hearing that sparked a little energy in me. (Laughs) By next year, I gotta be in a good position to where I can be on that card and also be a name that people are very intrigued to see come through.”

They’re already intrigued. Now it’s up to him, and if he has his way, he’ll one day represent Africa with a gold UFC championship belt, just like Usman, Francis Ngannou and Israel Adesanya.

“That would mean everything,” Nchukwi said. “Seeing people like Kamaru Usman and all the other African fighters making statements out there for our great continent of Africa, I'm glad to be one of the names that people will look up to. And when I'm able to bring a title back as well, that would mean a lot to me, my people and my family.”