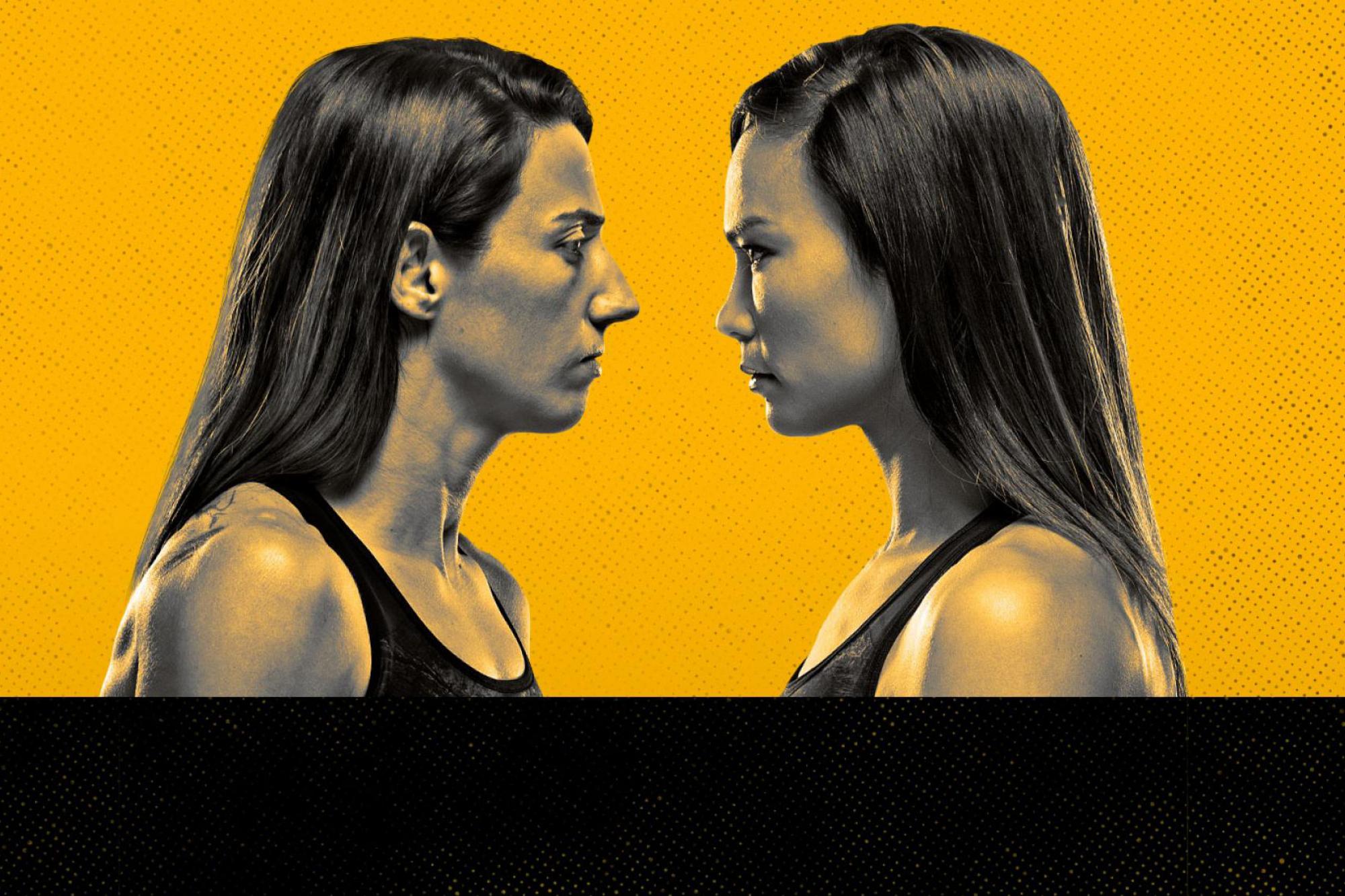 Live Results, Winner Interviews And More From UFC Fight Night: Rodriguez vs Waterson, Live From The UFC Apex In Las Vegas
By Thomas Gerbasi, on Twitter @tgerbasi • May. 8, 2021

UFC delivers another action-packed card at UFC APEX in Las Vegas, headlined by a flyweight battle of strawweight contenders as No. 6 ranked Marina Rodriguez takes on No. 9 Michelle Waterson. The co-main event will feature an exciting welterweight bout between talented strikers, as Donald Cerrone squares off with Alex Morono.

UFC FIGHT NIGHT: RODRIGUEZ vs. WATERSON will take place Saturday, May 8 from UFC APEX in Las Vegas. The main card will be available on ESPN and ESPN Deportes, as well as simulcast on ESPN+ in English and Spanish starting at 8 p.m. ET / 5 p.m. PT. The prelims will kick off exclusively on ESPN+ (English and Spanish) at 6 p.m. ET / 3 p.m. PT.

Dana White's Contender Series Brazil signee Rodriguez (13-1-2, fighting out of Florianopolis, Santa Catarina, Brazil) has wasted little time securing herself as a potential title challenger since joining the UFC roster in 2018. During this time, she has delivered exciting wins over Amanda Ribas, Tecia Torres and Jessica Aguilar. Rodriguez now has her sight set on securing the biggest win of her career in her first UFC main event opportunity.

Perennial contender Waterson (18-8, fighting out of Albuquerque, N.M.) looks to kick off her 2021 campaign by building on the momentum of her thrilling Fight of the Night win over Angela Hill last year. A former Invicta FC champion, she also holds notable victories against Karolina Kowalkiewicz, Jessica Penne and Paige VanZant. Waterson now hopes to make a statement by stopping Rodriguez’s momentum with another show-stealing performance.

Cerrone (36-15 2NC, fighting out of Albuquerque, N.M.) makes his record-tying 37thOctagon appearance. The owner of most wins (23) and tied for most finishes (16) in UFC history, Cerrone has earned epic stoppages against Matt Brown, Rick Story and Edson Barboza. Cerrone now aims to deliver another vintage “Cowboy” performance to further etch his name in the record books.

Morono (18-7 1NC, fighting out of Houston, Texas) steps in on short notice looking to secure the biggest win of his 11-year career. A diverse striker and grappler, he has delivered memorable victories against Max Griffin, Song Kenan, Zak Ottow and Josh Burkman. Morono is now gunning to turn heads in his first UFC co-main event opportunity by finishing a legend.

What time is UFC Fight Night: Rodriguez vs Waterson?

The first native of Guyana to compete in the UFC, Carlston Harris, became the first to earn a victory in the Octagon, as well, as he submitted Christian Aguilera in the welterweight opener.

The pace was fast from the start, with Aguilera landing the first significant blow of the fight, a hard right uppercut, in the second minute. Moments later, though, Harris rebounded with a crisp left hook that prompted Aguilera to look for a takedown. In the process, Harris got caught with the anaconda choke that ended matters at 2:52 of the opening frame.

OFFICIAL RESULT: Carlston Harris def. Christian Aguilera via submission (anaconda choke) at 2:52 of round one

“The Iron Turtle” was in great form in his middleweight bout against Tafon Nchukwi, as Junyong Park handed Nchukwi his first pro loss via majority decision.

The 185-pounders kept it standing in the opening round, with Park the busier of the two as he worked behind a sharp jab, while Nchukwi was most effective with his kicks.

In round two, the second inadvertent low strike of the fight by Nchukwi led referee Chris Tognoni to deduct a point from the Cameroon native, putting him in position to seek the finish of likely needing a finish to leave with a victory. With under two minutes left, Park got a takedown, but Nchukwi turned the tables and made it back to his feet quickly. And though it was a better round for Nchukwi, in the closing seconds he got caught in a guillotine choke that nearly ended the bout.

Park put the fight on the mat in the second minute of the final round and he went after the finish. And though he didn’t get it, there was no question that he was the winner after the final horn sounded.

Featherweights Michael Trizano and Ludovit Klein put on a back-and-forth battle for three rounds, with Trizano winning a close, but unanimous, decision.

Trizano led the action through much of the opening frame as he stalked Klein with his rangy striking attack, but the Slovakia native did surprise his foe with a takedown with under two minutes to go.

Klein got his standup game into a rhythm in the second, but Trizano answered back, leading to some solid exchanges. But again, it was a takedown by Klein late that may have left an impression on the judges.

Trizano opened the final round by rocking Klein with a right hand, Klein responding a few moments later with a hard left. There were two more takedowns by Klein that broke up Trizano’s effective aggressiveness, but the last one nearly cost him, as Trizano locked in a tight guillotine choke that was only interrupted by the final horn.

In an intriguing clash of middleweight prospects, it was Phil Hawes taking a three-round unanimous decision win over Kyle Daukaus.

After a fast start, the fight went to the mat, and following some good action from both, the two rose, with Daukaus pressing Hawes against the fence as he looked for a takedown. Hawes stayed busy as well, the two separating late in the frame.

Daukaus rattled Hawes with several hard shots early in round two, but “Megatron” recovered quickly and locked his foe up. After separating, Hawes appeared to jar Daukaus with a right hand, prompting another clinch, this one with Daukaus in control. An inadvertent low blow by Hawes brought a momentary halt to the action with a little over a minute left, and when the fight continued, it was Hawes leading the action with an active striking attack.

Hawes opened up the third round with a takedown and he tirelessly continued his busy assault until the final horn, putting a cap on a hard-earned victory.

In his first fight since November 2019, lightweight contender Gregor Gillespie put on a gritty display of heart and determination in stopping Diego Ferreira in two rounds.

There were a couple frantic scrambles on the mat in the second minute of the bout, and when the two rose, Ferreira rattled Gillespie with punches upstairs. That led Gillespie to seek a takedown and while he got it, Ferreira defended well and kept the scrambles coming until they returned to the feet with a minute left. Gillespie favored his chances on the mat and got another takedown, but Ferreira took his back late.

Gillespie was coming up short on his takedown attempts early in round two, and when the fight did go to the mat, Ferreira used a kimura to control matters until he let it go, allowing Gillespie to take over. With a little over a minute to go, Gillespie took the Brazilian’s back and fired off strikes until referee Chris Tognoni had seen enough, stopping the fight at 4:51 of round two.

It was a one-sided win for Marcos Rogerio de Lima in heavyweight action, as the Brazilian defeated Maurice Greene via unanimous decision.

A wild start saw both men swinging hammers until de Lima pushed Greene against the fence. In the second minute, the Brazilian got the fight to the mat and he kept it there for the rest of the frame. There was more of the same in the second, as de Lima took Greene down and kept him grounded until the end of the round. A late shot by de Lima after the horn drew a stern warning from referee Herb Dean, who also warned Greene for using his fingers near de Lima’s eyes, but the fight continued for a third round. And in that third round, de Lima stuck to the plan that was working, as he took the fight to the mat once again, dominating the action en route to a shutout win.

Perennial welterweight contender Neil Magny kept the pace high for all three rounds, and that led him to a unanimous decision victory over fellow 170-pound standout Geoff Neal.

Neal’s left hand was on target from the start, but Magny was able to slow him down when the two clinched against the fence. Magny’s grappling got more offensive than defensive in the second half of the round, and he scored a brief takedown of the Texan.

Neal got his own takedown early in round two, but Magny didn’t stay on the mat long, and the back-and-forth action continued, neither fighter able to significantly pull away, even though Magny’s busy attack may have had him slightly ahead.

That high activity rate didn’t wane in the final round, and Magny simply outworked Neal down the stretch, and that was enough for him to secure another big win on the scorecards.

Taking a fight with Donald “Cowboy” Cerrone on short notice isn’t an easy task, but Alex Morono rose to the occasion in the co-main event, as he halted the veteran welterweight in the first round.

After a clinch to begin the fight, Morono took the fight to Cerrone with his striking attack, but “Cowboy” remained patient, and he countered well with kicks to the body. Morono landed several right hands over the course of the round, and he hurt Cerrone bad with one with under a minute left. Cerrone tried to recover, but Morono kept the heat on until referee Marc Goddard had seen enough, with the stoppage coming at

OFFICIAL RESULT: Alex Morono def. Donald Cerrone via TKO (strikes) at 4:40 of round one

Strawweight contenders Marina Rodriguez and Michelle Waterson battled it out ten pounds north at flyweight and delivered the main event goods for 25 minutes, with Rodriguez emerging victorious via unanimous decision.

Rodriguez held the edge in a first round that remained on the feet, but Waterson did get in enough kicks to keep her opponent honest. Rodriguez did land some hard close-range shots late, punctuating a good frame.

The Brazilian continued to keep a steady pace on offense in round two, staying one step ahead of Waterson in a fight that was competitive, but slowly going in Rodriguez’ direction.

Waterson went after Rodriguez’ lead leg in the third, and while she was effective with that attack, everything else was going Rodriguez’ way, as she was able to get off plenty of offense both at range and in the clinch.

In the fourth round for the first time in her career, Rodriguez started out the frame in control, but in the second minute Waterson took the fight to the mat and kept her opponent grounded until the horn, setting up a pivotal fifth round.

Waterson landed a thudding kick that immediately brought up swelling on Rodriguez’ jaw early in the final frame, but the Brazilian took it well and kept marching forward, getting in some hard right hands and a head kick of her own down the stretch.