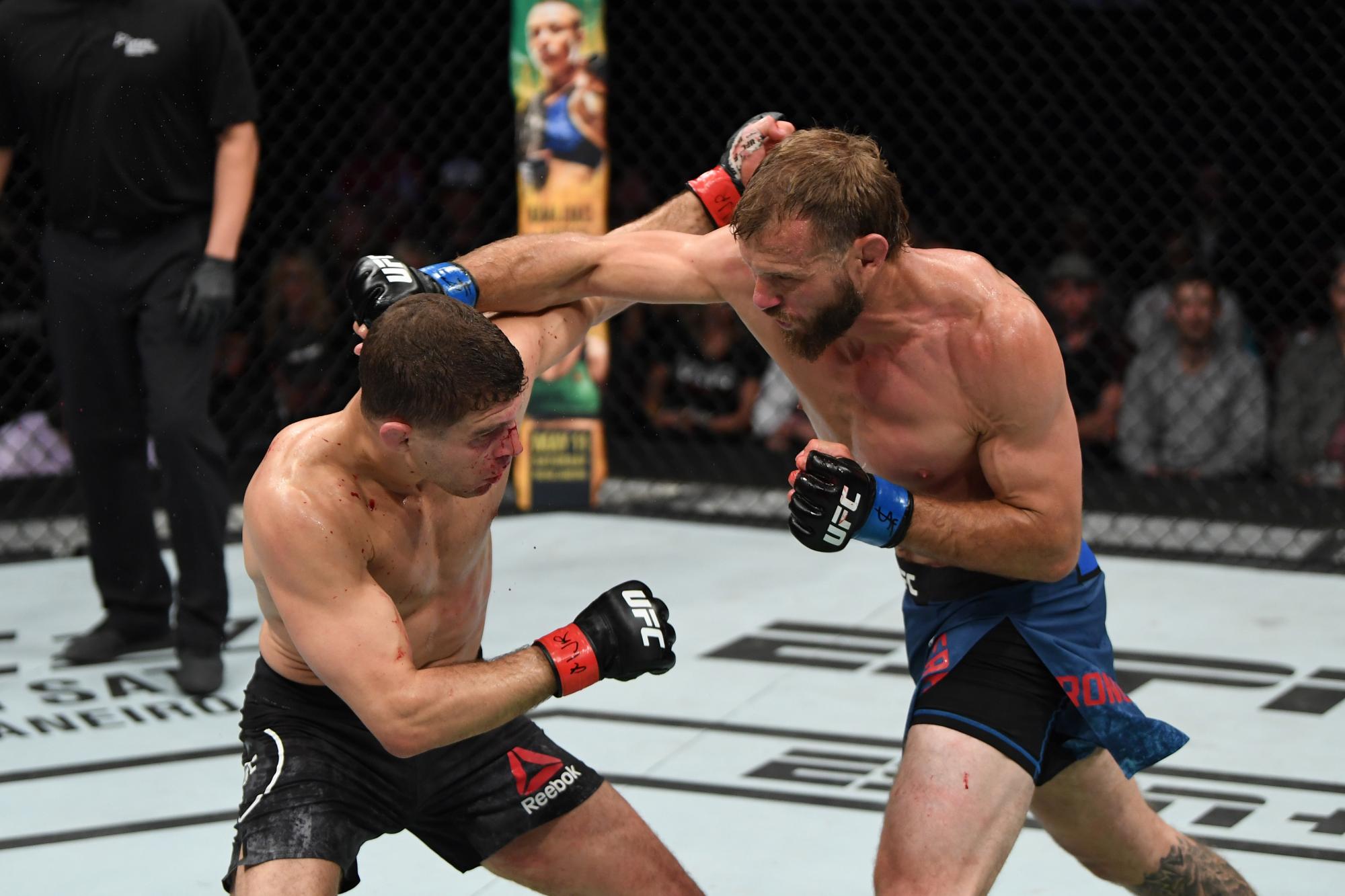 The Talking Points and Bonus Winners of UFC Ottawa
By Jon Gagnon • May. 5, 2019

The on-paper results versus the final product of UFC Ottawa tell two different stories. Only three of 12 fights were finished at the Canadian Tire Centre but most that went the distance were thrilling from start to finish. None more so than the main event between elite lightweights, Al Iaquinta and Donald “Cowboy” Cerrone.

The UFC’s all-time fight leader (23 victories) has brought a fury back to the lightweight division. It began with two epic finishes, against Mike Perry and Alexander Hernandez, which put everyone on notice that the former No. 2-ranked 155-pounder had returned.

Saturday’s victory over Al Iaquinta at UFC Ottawa may have been the most impressive of all.

Cerrone bested Iaquinta via unanimous decision, crippling the former title challenger with left jabs and the notorious “Cowboy” leg kicks. It was another night of records as well. Cerrone set a new personal-high with 138 significant strikes and he passed Anderson Silva and Jeremy Stephens for most knockdowns in UFC history.

Social Post
Fight of the Night
Iaquinta vs Cerrone

It was “Dad Cerrone’s” – Cowboy’s new self-proclaimed nickname – first decision victory in over four years. But that’s no blemish to his performance. Iaquinta put on a legendarily gritty display and refused to be finished on two separate Cerrone flurries.
“I knew Al was going to be super tough, I said that from the beginning,” Cerrone said. “The guy is tough as nails and putting him away didn’t even register.”
Cerrone pointed out all fight week that he made the move to welterweight on his own accord. It wasn’t because of weight cutting issues or a series of losses. He was the No. 2-ranked lightweight at the time of his departure.
So now, after three consecutive wins, Cerrone is expecting the UFC to bring him two of its most prized offerings: a title shot or Conor McGregor.
“If they need someone for a title shot it better be me,” Cerrone said. “I feel entitled. I would definitely derail (a title shot) for Conor. I would love my next fight to be for a title but if Conor comes in, let’s go man.”

The hype behind Macy Chiasson should reach its peak after her performance in Ottawa. Chiasson was taken down early in the fight but returned fire from the ground to dominate the next round and a half before finishing Sarah Moras.
“I’m open to anyone that wants to do it,” Chiasson said. “There’s a few people in the Top 10 and some people floating around on social media that I have my eye on.”
The win is Chiasson’s third in a row in the UFC and all have been finishes. The current 14th-ranked bantamweight is ready to make her climb atop the division.

Walt Harris is accustomed to first-round knockouts. He’s amassed nine in his pro career. But the circumstances surrounding UFC Ottawa made Harris’ first-round finish of Serghei Spivac the sweetest of his career.
“This (win) was the best of my career, for sure,” Harris said. “There was so much pressure on me to perform and the way I got the knockout against a tough guy, a highly ranked knockout. I didn’t take any damage.”
Harris recently had his win over legend Andrei Arlovkski overturned and then Aleksei Oleinik switched fight cards, giving Harris the UFC newcomer (Spivac) to take on in Ottawa. It was time to make a statement. Mission accomplished.

Around the Card
Shane Burgos

Shane Burgos was surprised to learn Cub Swanson could be his opponent at UFC Ottawa. Swanson, of course, is a legend and currently the No. 10 featherweight in the world. And though Burgos (4-1, UFC) has been on the radar as a top 145-pound prospect for some time, a matchup with Swanson was undoubtedly his biggest test to date.
Burgos out-boxed an all-time UFC striker and cemented himself as one of the most intriguing young featherweights with his victory over Swanson. The fight went to the judge’s scorecards after Burgos came close to a finish in the final seconds – but it was a flurry that Burgos didn’t think he needed.
“I was shocked and I’m still shocked,” Burgos said about the split decision, in which one judge gave Swanson all three rounds. “I don’t want to lose rounds. I’m always going for the finish,” Burgos said.
Now that the bar of facing a top opponent has been set, Burgos expects more to come.

The Dana White Contender Series’ product was on a mission to earn his first UFC victory. Sayles suffered a controversial loss by decision when he made his debut last August and Saturday night he made it clear the judges would not be a factor.
Sayles was extremely active, throwing over 200 strikes and nearly finishing Kyle Nelson in Round 1. But it was his versatility that earned his first UFC win. Sayles successfully avoided several Nelson submission attempts and in the third and final round he earned a submission of his own (arm triangle).

Fight of the Night: Iaquinta vs. Cerrone

Performances of the Night: Harris, Chiasson