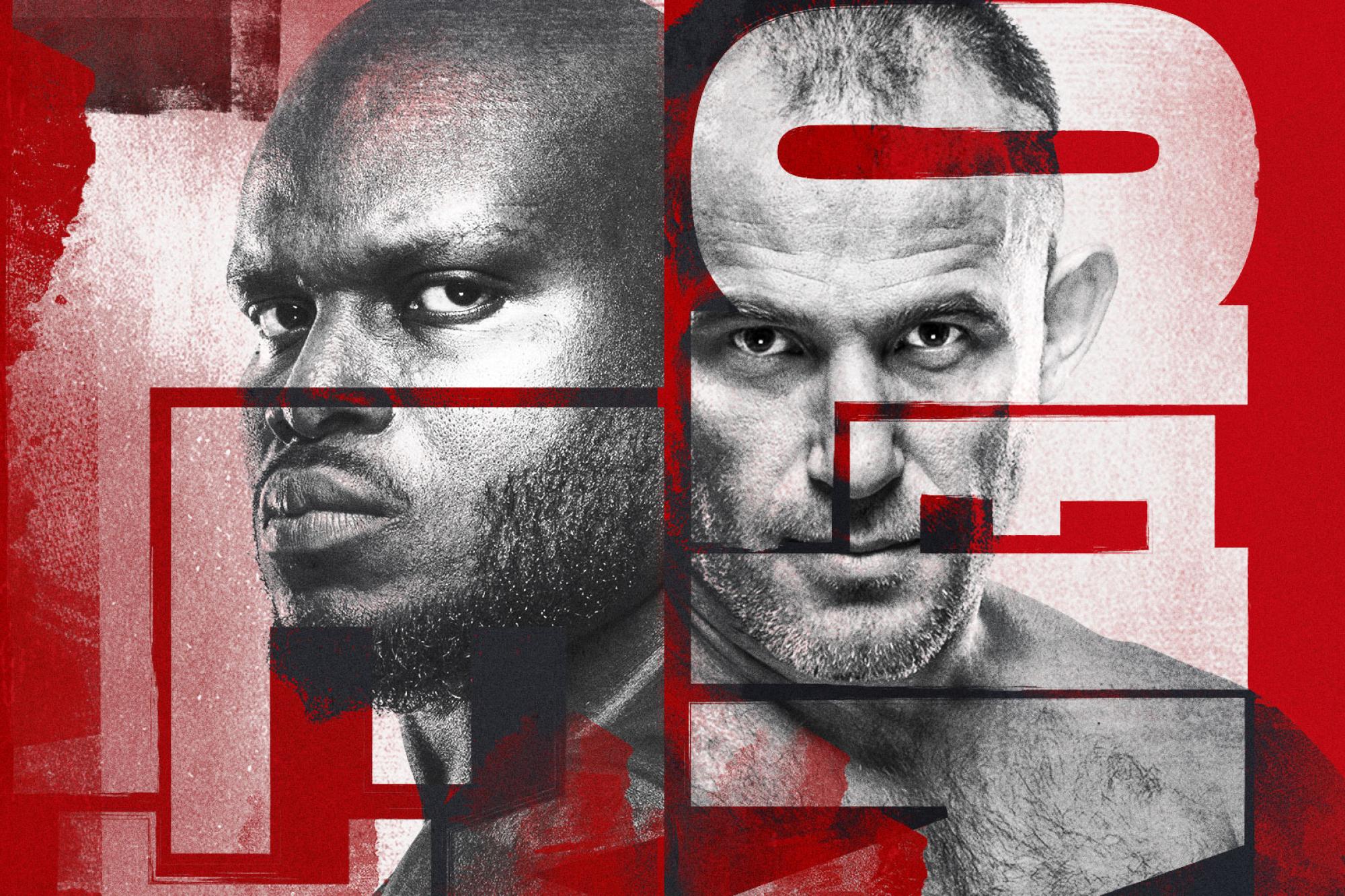 All The Big Winners From UFC Fight Night: Lewis vs Oleinik
By Thomas Gerbasi, on Twitter: @TGerbasi • Aug. 8, 2020

As the UFC returns to Las Vegas, top-ranked heavyweights collide in this week's main event. No. 4 Derrick "The Black Beast" Lewis will test his durability and one-punch knockout power against No. 10 Aleksei "The Boa Constrictor" Oleinik, one of the most feared submission artists in the entire sport.

Omari Akhmedov carries a six-fight unbeaten streak into his battle against former champ Chris Weidman in the co-main event, and lightweights on the precipice of a breakthrough kick off the main card when Beneil Dariush welcomes Scott "Hot Sauce" Holtzman.

Both fighters spent the opening round trying to establish themselves physically, with a pair of takedowns keeping it even until a late visit to the canvas courtesy of AlQaisi broke the tie.

The back and forth action continued in the second, this time on the feet, with each fighter getting their shots in. But when AlQaisi’s takedown attempts were turned away, it allowed Rivera to take a slight lead with his standup game, and while the action remained competitive in the third, Rivera landed the sharper strikes and scored another takedown en route to the close win.

Zalal opened the fight with a spinning back kick that dropped Barrett and nearly finished him, but the New Englander shook off the effects of the blow and was able to get back in the fight. And while he wasn’t in any serious danger the rest of the round, he wasn’t able to corner his foe long enough to get his own shots off.

Barrett started the second strong, but in the second minute Zalal threw him to the mat and took his back. Zalal worked hard for the choke, and while Barrett defended well, it was a dominant frame for the Morocco native.

With more solid groundwork and striking, Zalal put another round in the bank in the third, making it an easy job for the judges on this night.

Canadian featherweight Gavin Tucker picked up an exciting victory, rising from an early knockdown to submit Justin Jaynes in the third round.

Tucker was landing sharp punches and kicks as the fight began, the sound of the shots echoing throughout the Apex. Jaynes took all the blows and kept marching forward as he looked to get his own bombs in. And out of nowhere, a left uppercut with 90 seconds dropped Tucker. The Canadian weathered the storm and got back to his feet, but he was still wobbly. Tucker then got caught in a guillotine choke on a takedown attempt, but after he escaped, he nearly finished Jaynes with an arm triangle, capping off a wild round.

Back on the offensive, Tucker fought as if he didn’t get dropped in the previous round as he attacked Jaynes aggressively with all eight limbs, not allowing the Las Vegan to get any significant offense off. It was as close as you can get to a 10-8 round without a knockdown, as Tucker began to pull away.

Jaynes roared out of his corner to start the third, but after some positive moments, he got rocked by a knee that sent him reeling to the fence. A takedown attempt followed, but Tucker turned that into his favor and took Jaynes’ back, ultimately sinking in the rear naked choke that forced a tap out at the 1:43 mark.

Middleweight veteran Andrew Sanchez brought his striking game out against Brazil’s Wellington Turman, and the result was an impressive first-round knockout victory.

Opting to let his hands go, Sanchez (13-5) left his grappling game home in Montreal and it was a wise choice, as he outlanded Turman (16-4) throughout the first round before a series of right hands landed, one putting the Brazilian flat on his back. Moments later, referee Herb Dean called a halt to the bout at 4:14 of the opening round.

Lightweight up and comer Nasrat Haqparast returned to the win column with a three-round unanimous decision over UFC debutant Alexander Munoz.

Munoz (6-1) put Haqparast on his back and against the fence to start the fight, but the Afghani prospect got to his feet quickly. A low blow by Munoz brought a brief halt to the bout, and after it resumed, Haqparast (12-3) got into a rhythm, momentarily jarring Munoz with his strikes as he held off more takedown attempts.

The wear of the fight was showing on both fighters’ face in the second round, and while Munoz was aggressive and staying in the pocket with Haqparast, it was Haqparast still landing the crisper and more telling blows, and he carried on with his solid work in the third, wrapping up the victory via identical scores of 30-27.

Kevin Holland picked up his second knockout win of 2020, as he finished Octagon newcomer Joaquin Buckley in the final round of their middleweight contest.

After Buckley opted against a touch of gloves, Holland scored a wild takedown, with Buckley returning the favor with a right hook once the two rose. Soon, the two settled into the bout, but Buckley was throwing every punch with fight-ending intentions. Holland took everything well and calmly got his game in gear, distracted only by a pair of low blows from his foe. With 1:20 remaining, a right cross by Holland put Buckley on the canvas, but the St. Louis native rose quickly, seemingly unhurt, only to catch a barrage of shots as the round ended.

The second was more of the same when it came to the tactics of the two fighters, with Buckley ultra-aggressive while Holland calmly picked his shots, but it was Holland who wound up with the right plan of attack, as a laser-like right hand put Buckley down hard in the third, prompting referee Mark Smith to step in immediately. The official time of the finish was :32 of round three.

After a takedown by Means to start the fight, the 170-pounders kept it standing for the rest of the opening round, Staropoli taking an early lead but Means roaring back before the two traded momentum until the horn.

Means nearly finished the bout in the second minute of round two when he dropped his foe with a kick and followed up with ground strikes, but Staropoli recovered, rose and got back to swinging hard shots at the Albuquerque native, leading to another exciting round.

After a fast start to the third by Argentina’s Staropoli, Means slowed things down by working hard for a takedown, and while he didn’t get it, he did control the action for a long spell, a smart strategy as he defused the explosive attack of his opponent.

After some high-impact standup exchanges punctuated by a couple inadvertent fouls, Dariush attempted to get the fight to the mat but was turned away by Holtzman. Moments later, Dariush drilled Holtzman with a flush knee that nearly ended the fight. Holtzman seemingly recovered, but Dariush kept pressing, and out of nowhere he threw a spinning backfist. The forearm landed flush on Holtzman and sent him to the canvas, bringing in referee Herb Dean to halt the bout at 4:38 of round one.

It was three rounds of clinch and ground control for bantamweight contender Yana Kunitskaya, who cruised to a shutout three-round decision over Julija Stoliarenko.

Kuntiskaya pinned Stoliarenko to the fence for much of the first round, and while the Lithuanian made a brief charge with under two minutes left when she briefly broke free, Kunitskaya regained control in the clinch and took the round. There was more of the same in rounds two and three, with Kunitskaya dominating her foe whether in the clinch or on the mat. Stoliarenko tried to find an opening for her patented armbar in the second and third frames, but it didn’t happen, as the swarming Kunitskaya wasn’t having it.

Middleweight power hitter Darren Stewart switched things up and scored the first submission victory of his career, finishing Maki Pitolo in the first round.

Pitolo landed some solid shots in the first while making Stewart miss, but the Brit was undeterred, and with under two minutes remaining, he locked up with the Hawaiian. Pitolo reversed the position and looked for a takedown, but it was Stewart making the final adjustment, sinking in the guillotine choke that forced a tap at the 3:41 mark.

Weidman’s first three takedown attempts were defended well by Akhmedov, but the fourth landed with two minutes remaining. Akhmedov didn’t stay grounded long, but Weidman kept the pressure on and got the fight back to the mat moments later. This time, he kept his foe there until the horn.

Akhmedov turned the tables early in round two as he took Weidman to the mat briefly. Once standing, Akhmedov was more aggressive with his striking as the former champ kept looking for a takedown. It was Akhmedov having the better luck as Weidman tired, and two more takedowns for the Russian followed in the final two minutes.

With the bout seemingly on the line, Weidman came out fast for round three and scored two takedowns, the second time nearly locking in an arm triangle choke. Akhmedov found daylight, but Weidman remained in control from the mount position, punctuating his victory with ground strikes as the seconds ticked away.

Derrick Lewis set a UFC record for most knockouts by a heavyweight in the UFC Fight Night main event at the Apex in Las Vegas, halting fellow contender Aleksei Oleinik in the second round.

Lewis rushed Oleinik as the two were waved into battle, landing with a hard body kick before pinning his foe to the fence. Moments later, Lewis threw Oleinik to the mat and fired off strikes before settling into the top position. Oleinik smoothly reversed position and took Lewis down, and now “The Boa Constrictor” went to work. Lewis smoothly pulled off a reverse of his own, only to be put on his back a second time. Oleinik worked hard for a submission, but Lewis hung tough and made it to the end of the round.

Early in round two, Lewis came out with a flying knee and then dropped Oleinik with a right hand. He went on to blitz Oleinik with ground strikes until referee Herb Dean stepped in. The time of the finish was 21 seconds of the second stanza.