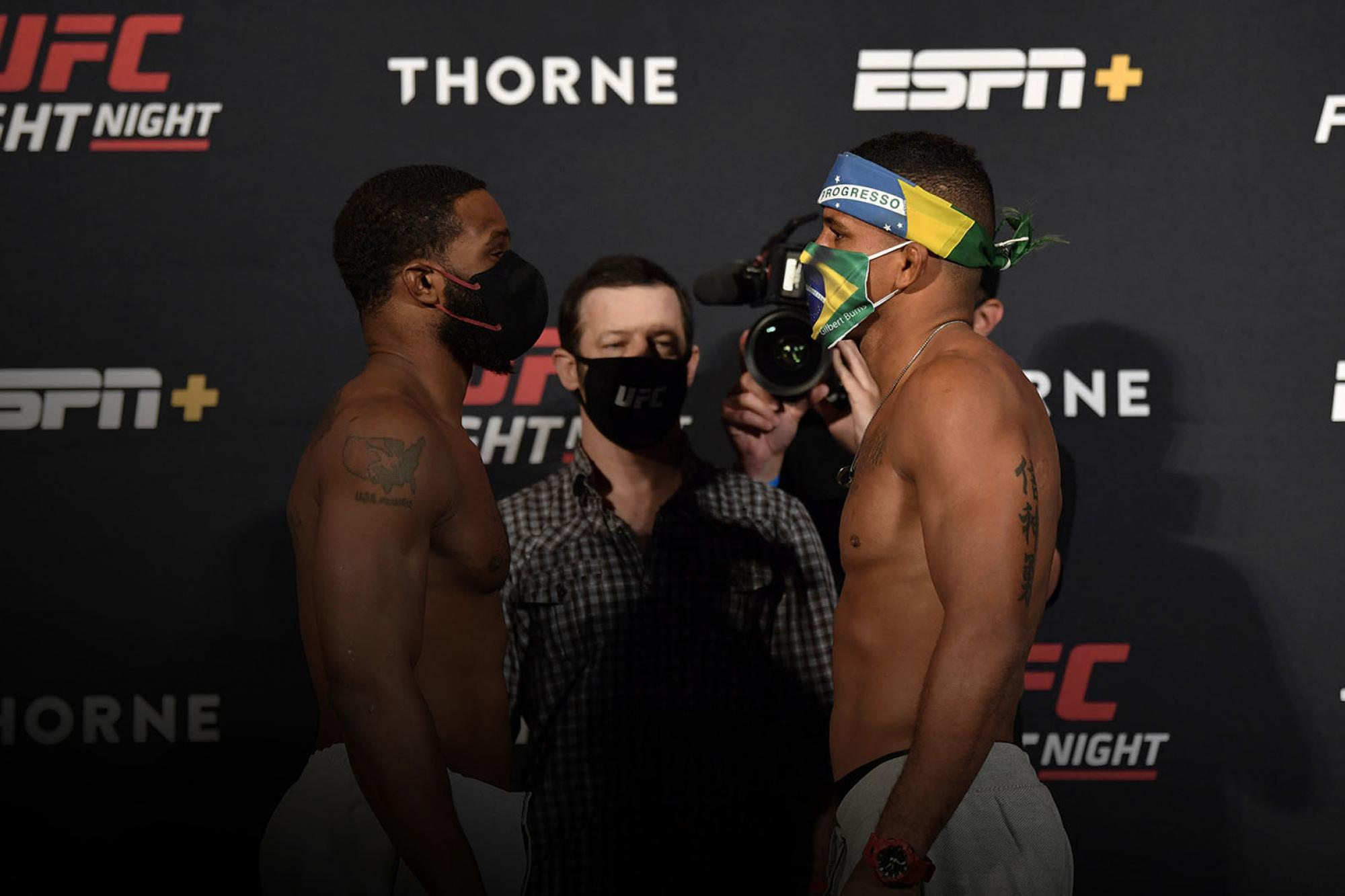 Chris Gutierrez delivered the most impressive win of his UFC run in the featherweight opener, as he halted Vince Morales in two rounds to extend his current winning streak to three.

Gutierrez got off to a fast start, barely missing with any of his strikes. His weapon of choice was a series of kicks to Morales’ lead leg, and by the three-minute mark those kicks were taking their toll.

In the second minute of round two, Morales was staggering from the kicks to the leg, with a switch to the southpaw stance not helping. After Gutierrez put Morales on the deck with under two minutes left, it looked like the end was near, but the Idaho native gamely rose to his feet. The end did come moments later, though, as referee Jason Herzog stepped in after another leg kick-induced knockdown. The official time of the stoppage was 4:27 of round two.

Casey Kenney bounced back from a loss to Merab Dvalishvili in style, submitting Louis Smolka in the first round.

The two bantamweights got after it as expected, but in the midst of an exchange with a little over two minutes left in the opening round, Kenney clipped Smolka with a right hand that appeared to stun him. Smolka responded with a takedown attempt but got caught in a guillotine choke that forced him to tap out at 3:03 of the first round.

Octagon newcomer Brandon Royval promised action in his UFC debut against flyweight contender Tim Elliott, and the two delivered up until Royval scored the upset via second-round submission.

Elliott got the fight to the mat to kick the bout off, and as he scrambled for position, he landed several hard strikes. Royval responded well and fought his way back to his feet, but Elliott remained locked on. Royval eventually got free, but Elliott wasn’t interested in a standup battle, as he continued to work his grappling attack. Royval had his moments on the feet, but whenever he got too aggressive, Elliott moved in for the takedown.

The frantic pace continued in round two, with Royval getting more scoring opportunities as Elliott’s attacks slowed in their intensity. And when the Coloradan was able to get top position on Elliott and sink in an arm triangle, it was game over, as Elliott tapped out at 3:18 of the second round.

Hill scored a flash knockdown of Abreu less than 20 seconds into the fight, courtesy of a right hand upstairs, and he followed with a knee as the Brazilian rose. Abreu shook the effects of the blow off, but with a little over three minutes remaining, a left knee to the body put him down again, and this time he didn’t get up, as Hill’s follow-up strikes brought in referee Herb Dean to stop the fight at 1:51 of the opening round.

Making his UFC debut on less than a week’s notice, Gabe Green left it all in the Octagon in search of victory, but it was Daniel Rodriguez who got his hand raised via unanimous decision in a hard-fought welterweight bout.

Graduates of the California regional circuit, Rodriguez and Green didn’t need time getting acclimated to each other’s style, the result being a first round where every strike was seemingly designed to end the fight. And while the frame was close, Rodriguez seemed to edge it, and he started to pull away in the second as he landed harder and harder shots. Green wasn’t backing down, though, setting the stage for an interesting third frame, as the newcomer kept marching forward while Rodriguez was the busier and more accurate striker.

Things didn’t go too well for Katlyn Chookagian in her flyweight title fight against Valentina Shevchenko, but it was a much better result in her bout against Shevchenko’s sister Antonina, as she won a one-sided three-round unanimous decision.

Chookagian surprised Shevchenko with a takedown in the opening minute and the Pennsylvania native went all-in for a rear naked choke. Shevchenko defended well, but soon she was taking a series of unanswered strikes from Chookagian until she rose to her feet in the final seconds of the round.

After a dominant first frame, Chookagian went right after Shevchenko to start the second, and she put “La Pantera” back on the mat for another round of punishing action.

Shevchenko had some success on the feet in the first three minutes of the final round, but she never had Chookagian in any trouble, and it was the “Blond Fighter” finishing strong to wrap up an important victory.

Mackenzie Dern got a spirited effort out of Hannah Cifers in the main card opener, but once Dern got her hands on her opponent on the canvas, it was no surprise that a first-round submission victory followed for the strawweight up and comer.

Cifers went on the attack immediately, bulling Dern into the fence where she scored with knees and punches. Dern got free and showed off some fast hands before the fight hit the mat in the third minute, and once there, it was Dern’s world. Moments later, Dern had a kneebar and Cifers tapped. The official time of the finish was 2:36 of round one.

Lightweight prospect Roosevelt Roberts was on from start to finish in his bout against Brok Weaver, as he scored a second-round submission victory.

Roberts was the sharper fighter throughout the first five minutes, and he nearly ended the fight with a tight guillotine late in the frame, but Weaver was able to break loose just before the horn.

Keeping the pressure on, Roberts scored a takedown just before the three-minute mark of round two, and it was just a matter of time until he sunk in the rear naked choke that ended the bout via tap out at 3:26 of the second stanza.

Featherweight up and comers Billy Quarantillo and Spike Carlyle went to war for three rounds in their 150-pound catchweight bout, with Quarantillo edging out the unanimous decision.

Carlyle raced from his corner with a kick to the face, and while Quarantillo tried to fight him off, “The Alpha Ginger” was on the attack, quickly taking his opponent’s back. As Quarantillo scrambled, he nearly got caught in an armbar, but he pulled loose and got into his foe’s guard. Reversing position, Carlyle settled into the top spot with two minutes left, and while he stayed busy with his strikes, Quarantillo was doing the same from his back until Carlyle got up and walked away as if the round was over. Quarantillo responded with a left that dropped Carlyle but didn’t hurt him as the horn sounded.

Quarantillo caught a shot early in the second but recovered immediately and got the fight to the mat. Carlyle reversed position, but the Buffalo native remained busy from his back. Carlyle’s pressure was relentless, but Quarantillo’s work rate was just as high as he controlled matters in the clinch against the fence until a Carlyle takedown in the final minute. Quarantillo nearly sunk in a triangle choke in the closing seconds, but Carlyle got free as the second round ended.

The scrambles continued in round three, both fighters trading dominant positions, but Quarantillo appearing to be the fresher of the two as he made a late fight surge. With under two minutes left, Quarantillo got Carlyle’s back and looked for a choke, but it was Carlyle getting free and setting off a heated standup exchange in the final seconds where Quarantillo landed the cleaner shots.

After a brief feeling out process, the two big men got down to business, Ivanov focusing on his punching while Sakai did his best work with the kicking game. Neither was able to land the shot that would allow them to establish a big lead, but Ivanov’s volume gave him an edge in the early going of round two. In the second minute, Sakai got in some good work in the clinch, and while Ivanov didn’t stay there long, when he emerged, fatigue appeared to be setting in. Now it was Sakai’s turn to lift his work rate, and the kicks downstairs were doing damage. Ivanov did get a takedown in the final minute, yet was unable to do much with it before the end of the frame.

The third was another close round, with a fence grab by Sakai keeping him from hitting the deck, and with no penalty being assessed, it was a costly moment for the No. 12-ranked Ivanov, who falls to 18-4 with 1 NC.

As soon as he knew Tyron Woodley needed an opponent, Gilbert Burns raised his hand for the opportunity, and when he got it in the UFC’s return to Las Vegas Saturday night, he made the most of it, scoring a dominant five-round unanimous decision over the former welterweight champion to extend his current winning streak to six.

“I was calling these guys out for a reason,” said Burns. “I’m ready.”

Burns came out fast, meeting Woodley in the middle of the Octagon, and in the first serious exchange, he rattled the Missouri native and put him on the deck. The Brazilian went in for the finish with hammerfists, but Woodley withstood the initial assault. Burns got into the mount position, but the bloodied former champ held on until he was able to explode back to his feet with two minutes left. Burns kept the pressure on until the end of the frame, Woodley going back to his corner with a nasty cut over his left eye.

In the second minute of round two, Burns took Woodley down and controlled matters for a spell until Woodley rose. The two welterweights continued to battle along the fence, neither putting together any significant scoring runs.

There were no trips to the mat in the third round, but it was still Burns in control as Woodley was simply being outworked by his foe, who mixed up his attacks nicely throughout the frame.

Woodley stuffed a Burns takedown attempt in the fourth, but as he controlled the clinch against the fence, there was little offense being unleashed. With three minutes left, referee Herb Dean restarted the stalled action and Burns let his hands go, drilling Woodley and hurting him with 1:40 remaining. Woodley recovered quickly and wrapped Burns up, but he was taken down moments later and nearly caught in a submission before the horn intervened.

Much of the first half of round five was spent in the clinch, with referee Herb Dean restarting the action midway through. But even when separated, it was Burns leading the action, with Woodley showing no sense of urgency to try and pull off a miracle comeback outside of a couple haymakers that didn’t hit the mark.