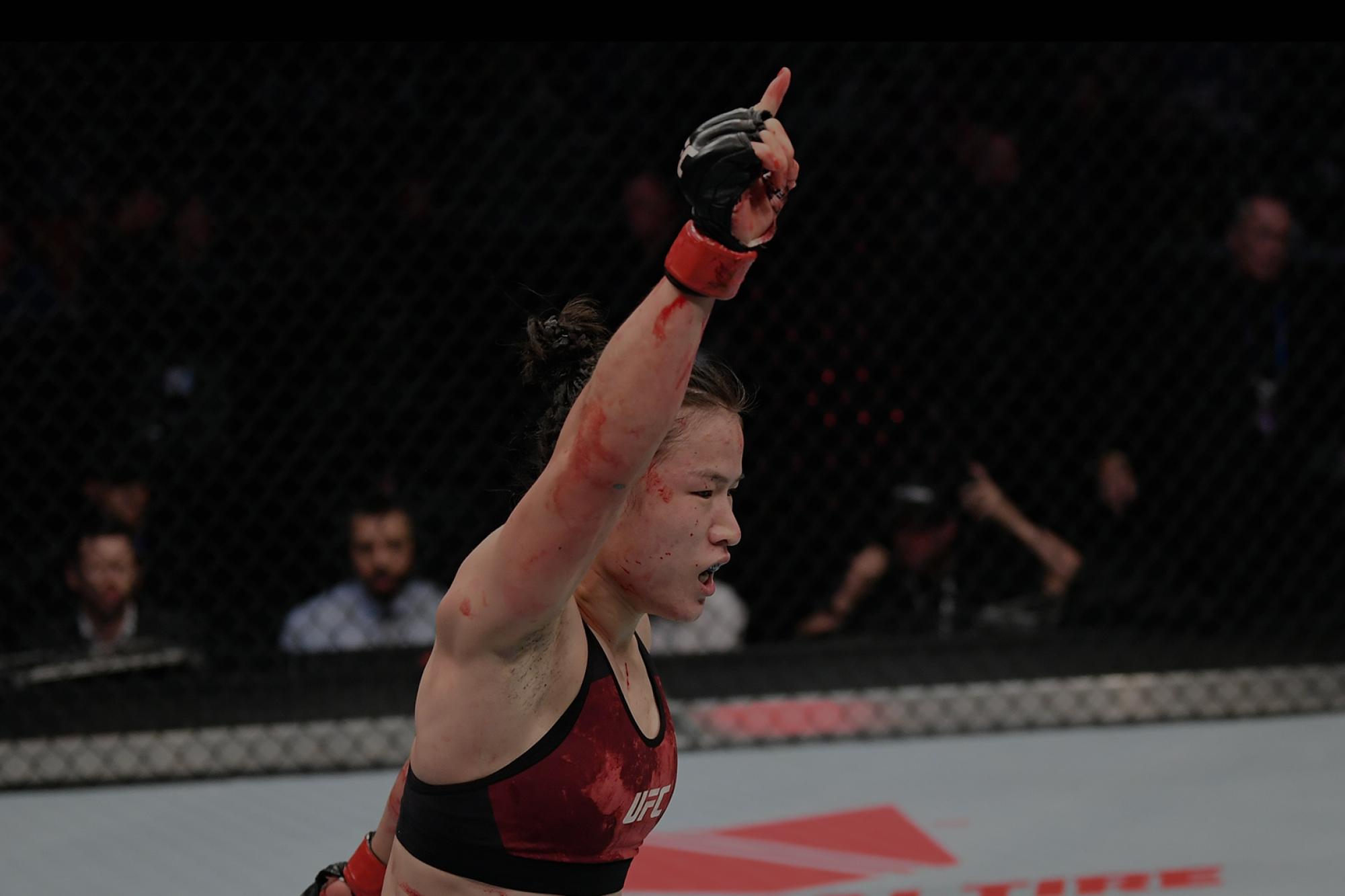 Weili Zhang has been asking for a top-ranked opponent since she made her UFC debut, and she finally got her wish in the "Holy City of Warriors."
By Thomas Gerbasi • Mar. 1, 2019

With 18 consecutive wins and back-to-back UFC victories over Danielle Taylor and Jessica Aguilar, it’s very possible that if Weili Zhang defeats No. 7-ranked Tecia Torres this Saturday, the No. 15-ranked “Magnum” could find herself in title contention in the 115-pound weight class.

That’s a lot to have riding on 15 minutes in the Octagon, but Zhang is taking it all in stride. 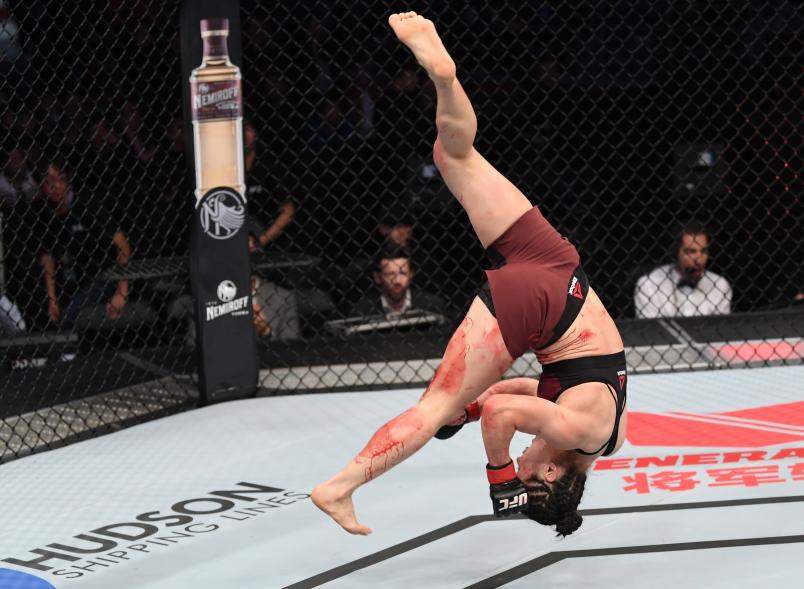 “The Chinese often say, ‘You must eat every mouthful. The way is one step at a time,’” Zhang said. “If I beat Tecia, I will be ready for what’s next when it comes.”

That cool permeates throughout Zhang’s being. Whether in the Octagon or outside it, there is a sense that the 29-year-old doesn’t get rattled by much, if anything. It’s why she hasn’t lost since her pro debut in 2013, and why it wasn’t a shock to her when she was presented with a fight against perennial contender Torres after just two UFC fights. In fact, if Zhang had her way, she would have had a fight like this even sooner.

How soon? As soon as she left the Octagon after beating Taylor in August of last year.

When Zhang decisioned Taylor, it was a clear-cut victory that no one disputed, but it was far from the performance the Hebei native wanted to deliver in her UFC debut. Chalk it up to the UFC jitters, but there was more to it than that.

“As you know, my coaching staff was absent due to visa problems,” she said. “I thought, ‘Oh my God, it's my first show. Going to America by myself, getting ready to go to war, jet-lag by yourself, losing weight.’ The hardest part was when I was standing in the cage. I looked back and there wasn't a familiar face. I couldn't even hear a familiar voice. Now that I think about it, it's a very scary environment. At the time, I thought the whole arena was quiet, and I could only hear myself breathing and saying I was scared.”

It’s not the situation any athlete wants to be in. Many freeze. Zhang went to work, but instead of fighting her usual fight, she decided that the best course of action was to get the win by any means necessary, then show what she could truly do the next time.

“I changed the tactics that the coaching team in Beijing made for me,” she said. “I lowered my requirements. Whatever wins. So I didn't do well in that fight, but good thing we won the fight. And yeah, I heard a lot of questions back home. The Chinese media and my fans all have the ability to question me, and I was anxious and I hoped I could prove myself soon.” 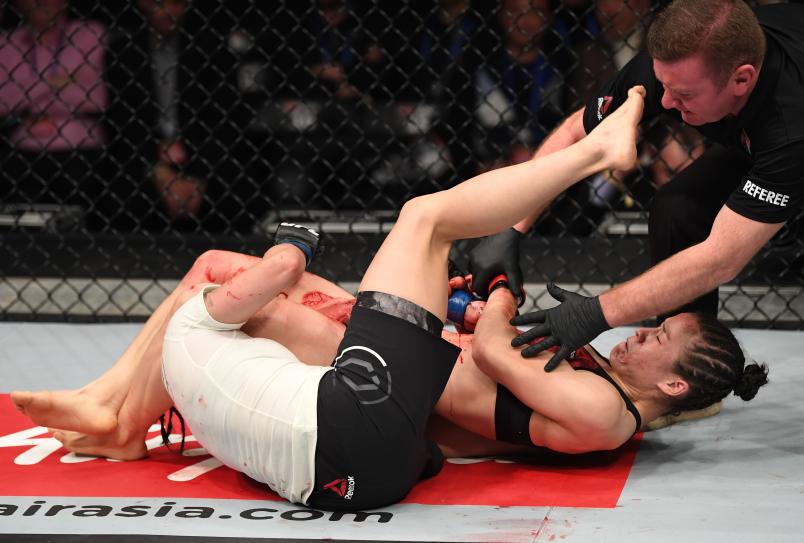 After a fight like that, which wasn’t nearly as catastrophic as Zhang believed, most would ask for a pleasing matchup that will show off the fighter’s skills in the best light possible. Instead, Zhang went on the offensive, asking her agent Brian Butler for the highest-ranked opponent she could get.

“I was always asking Mr. Brian if he could get me a top-ranked opponent after my first fight,” said Zhange. “I was eager to show what I'm capable of. But it didn't occur to me until Mr. Brian changed my mind through a videoconference. He said, ‘There is no hurry, you are here now so let’s build you up the right way. Don’t be too anxious to hurt yourself; UFC is the top level of professional competition, they will give you a growing process and they know when you should fight with what level of UFC fighters.’ His words convinced me.”

That doesn’t mean Zhang got an easy mark in her second Octagon bout, as she was matched up with veteran WMMA pioneer Jessica Aguilar in November. It didn’t matter, as Zhang impressed with a first-round submission win. Now it was back to Butler with her request again. This time she got what she asked for in Torres.

“My time is now,” she said. “It's time to show what I can do. They recognized me and I'm not surprised.”

Zhang smiles, happy at where her career is at the moment. She’s in the top 15, she’s got the fight she wanted, and she’s doing it in Las Vegas, the storied “Fight Capital of the World.” 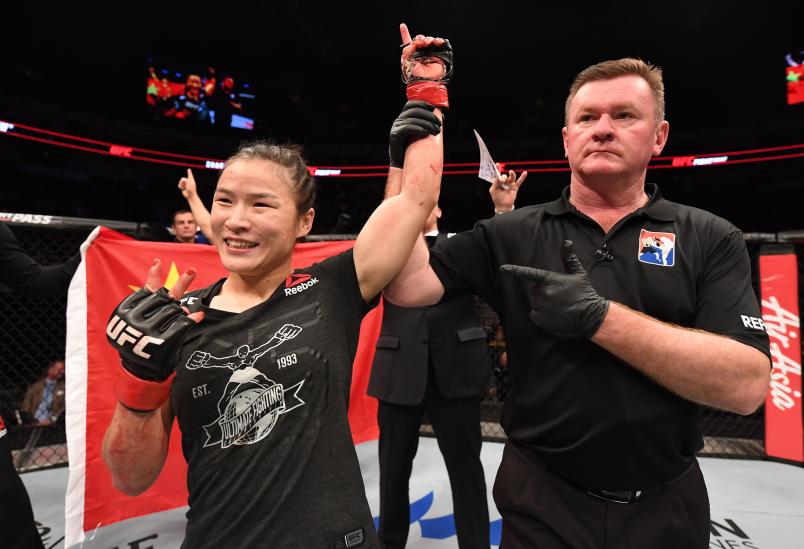 “Las Vegas is the Holy City of the Warriors,” said Zhang, perhaps giving the Nevada city a new moniker for its reputation as the center of the combat sports world. “This is the highest stage, and it is a great pleasure and a great honor for me. If the UFC gave me a chance, why not take it? I have no reason not to take it seriously. I have a chance to create my own glory.”

It’s an exciting time for Zhang, and it seems like that’s the case every time she takes the walk to the Octagon. But no matter what happens this weekend or in the future, it will probably be hard to top the Aguilar fight, as Zhang got to compete in the China for the first time as a UFC fighter.

“I didn't feel pressure; I felt motivation,” she said of the Beijing bout. “It was my chance and my team and I were taking this fight very seriously and we all worked very hard. The Chinese often say, ‘Success comes naturally.’ I had a meeting with my team and we worked out the tactics, and we were all on the same page. The three minutes you saw in Beijing was actually a very normal result using these skills I have practiced so much. So I saw what was supposed to happen.”

China has started to produce UFC level fighters with championship potential over the last few years, but the closest to title contention is one of the newest members of the roster in Zhang. For a culture with martial arts ingrained in its DNA, having a UFC champion would be a monumental accomplishment, and Zhang knows it.

“The Chinese are warlike and we have a very good tradition of practicing martial arts,” she said. “If traditional kung fu can demonstrate this ability on the world's highest stage, it can still win the championship and that's what all Chinese would like to see. That's 1.3 billion Chinese people that want to see this. That would be a big following, and whoever this champion is, is going to be very proud and very fortunate. If I had the chance, I'd take it. The key is the combination. It needs to combine Chinese kung fu with modern fighting. That's what me and my coaching staff have been after.” 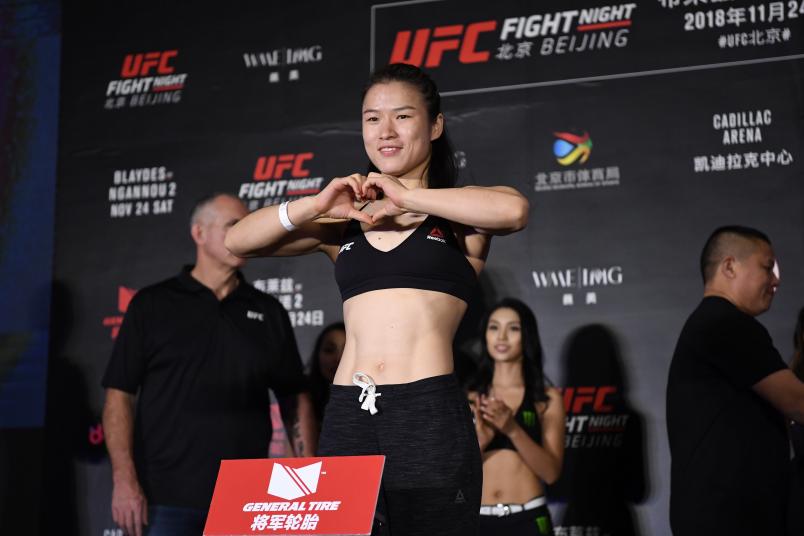 But what would life look like for Weili Zhang, UFC champion?

“I haven't thought about it yet,” she said. “My coaching staff and I are still trying to figure out how to take out this opponent, where our next opponent is, who she is. My life right now is about managing my body and one step at a time, my body becomes stronger. Don't get hurt. Prepare for war. To fight. If I really become the UFC champion, then I’ll wait to live the championship life. (Laughs) By then, I think I’ll have more fans. And my manager, coaches and teammates should have told me how to lead a good life.”

She’s already got the fans, already leading a good life, and all ready for Saturday night. All that’s left is winning.